I have a tiny bit of a confession to make here before I go any further with this – I love all things ‘weird’.

Perhaps weird isn’t the word that I’m looking for. Let’s go with ‘unique’. I admire all things that are unique. I was never ordinary, I was always different from the rest of my peers growing up. I say that because I grew up in a place where the most unique things, the things that were the most different, wound up being some of the greatest. This, is especially true in the world of film.

Beloved Beast falls into the category of what I would consider ‘unique’ – and in the absolutely best of ways. Beloved Beast is a 2018 horror film directed and written by Jonathan Holbrook. Fans of horror will immediately find themselves enticed by the film’s sinister cover poster alone. 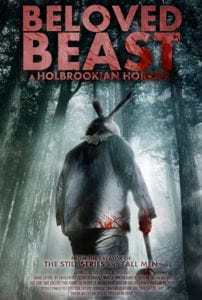 Running at 173 minutes, Beloved Beast is one of the longest films that I have ever found myself watching. When you first glance at that run time – you have to wonder how it is possible for someone to maintain interest for that long. I do have to say, I have seen a lot of movies in my lifetime, and there were frequently times when I found myself having to get up and walk around – or do anything to give myself a break from watching. I can honestly say that for the first time, I found myself completely engrossed in the story-line that was presented in Beloved Beast and when it was all over – I was left awestruck. This film is truly a Beloved Masterpiece.

The film starts off with a Quentin Tarantino style opening – a young girl named Nina (Sanae Loutsis) surviving a car crash that killed both of her parents. After recovering in the hospital, she was sent off to live with her Aunt Erma (Joy Yaholkovsky), who not only could care less about Nina’s best interests; she also hangs out with some pretty dangerous people.

Welcome to Slough Town, which carries a Twin Peaks meets Texarkana, Texas sort of vibe. There are more coroners than police officers – and the locals refer to the town as ‘cursed’. The police don’t even bother to blink an eye when it comes to a murder, which provides for quite an interesting plot touch. As a horror fan, one of the big things that gets a lot of detail – is the hometown in the story. How the hometown is presented truly sets a vibe for the rest of the film. The fictional world that Holbrook illustrated in this film absolutely carries that realistic, eerie vibe that makes you go ‘Well, I wouldn’t want to live there!’ – which is exactly what a horror film is supposed to do. In addition to following this girls tragic journey, the plot is thickened when you add the sequences of human trafficking, human/animal sacrifices and drug trades… which leads me to complimenting the ‘villains’ in the story.

Ash (Earl Gray) and ‘The Belgium’ (Paul Sobrie) absolutely killed it in terms of delivery as the bad guys in the movie. They both carried that creepy air about them with the perfect touch of bad. I have always found myself saying that it is harder to play the villain than the hero. It’s not just about the delivery of the lines, it is also about the method acting. To play a bad guy, you have to perform with that perfect touch of wicked. This duo absolutely gave me the chills. Let me take a moment to extend a gigantic kudos to the two of them – they absolutely nailed their respective roles.

After getting the tone of the story set, we finally get to meet Milton Treadwell (played by Jonathan Holbrook), an escaped patient from the mental institution. At a towering height of seven feet and weighing 350lbs, Milton proves to be quite an unstoppable ‘beast’.  After his grand escape from the mental institution, he finds and befriends Nina after rescuing her from a few satanic bullies. Nina then brings Milton back home with her, making him her one and only friend. As Milton continues his stay with Nina, viewers begin to wonder… is Milton more dangerous to Nina than her Aunt and her morally questionable friends?

I do not want to dive too deep into the plot here, because it is truly a magnificent story and I would hate to deliver any spoilers. However, I cannot stress enough how much I truly enjoyed this film. Beloved Beast is beyond a ‘good’ horror film, it is an empowering one. You have all the elements of a slasher, crime, drama and thriller all rolled into one fantastic film. This is something that many Hollywood Directors attempt and fail at, but Holbrook manages to take all those elements and have them highlight and compliment each other – rather than collide and create a chaotic storyline. In addition to those story elements, you have a combination of characters that you immediately find yourself growing attached to. In addition to the main cast of characters, you have the rookie cop (Morgen Johnson), the friend with the tragic backstory (Tabitha Bastien) and the ‘do good’ social worker (Elizabeth Rhoades) who you can’t help but pray they make it through the film because of their good nature in a cursed down… but ultimately, will they?

Not only does he maintain that enticing storyline throughout the entire film, he delivers a twisted ending that will leave you gaping in shock.

Jonathan Holbrook has taken the world of horror and spun it into something truly distinctive and unique with Beloved Beast. As I mentioned before, I have seen a lot of horror films. I have seen a lot of films in general. There were so many details in this film that I absolutely found myself enticed by. Starting from the perfecting casting by Holbrook to the Special Effects make-up done by Ret Harrison, to the Artwork illustrated by Alexi Angelo; this film had so many amazing touches to it. I have never before seen a horror film tie in a Child’s Fairytale story to the plot of the film, at least not to this degree.

Beloved Beast is a modern cutting-edge horror flick that would even leave horror legend Wes Craven awe-struck. Jonathan Holbrook is extremely talented and I am looking forward to seeing what other master pieces he puts together. Beloved Beast is the horror film that the community has been searching for in over a decade.

Stay tuned for more updates in regards to a release for this film!