The Falcon And The Winter Soldier just aired its season finale and man, it was flipping nuts! It was a culmination of all the awesomeness we’ve witnessed over the last six weeks. We’ve finally got our new Captain America! The flagsmashers have, more or less, been dealt with. Isaiah has been made proud and found some peace, and even John Walker got dealt with… in a way. John Walker, as we all know, started out as Captain America but he has now become something else. Someone else. Okay, all joking aside, Walker has assumed his final form. John Walker finally becomes… U.S. Agent! 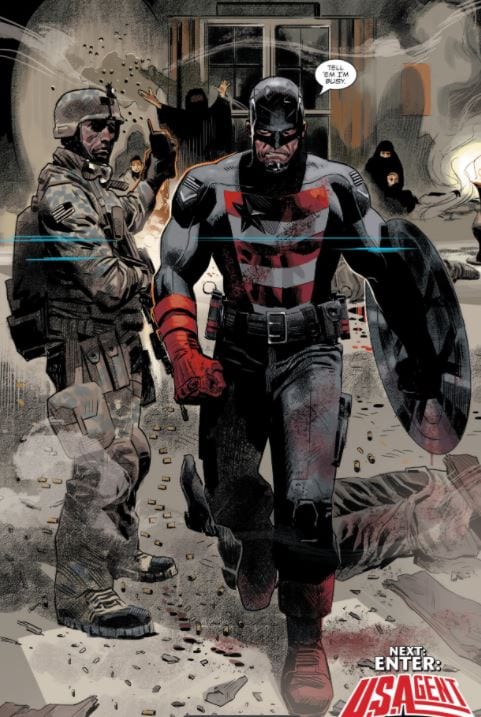 Near the end of the episode, we see John Walker, his wife, and Contessa fhiklshkljlk meet up where John had his hearing. It seems like John has agreed to work for her, or with her, depending on what their relationship will be. When John finally exits the room he’s changing in it is to reveal his brand new costume! That’s right, he got a whole new costume to go along with his new name! Okay, so a brand new costume might be kind of an overstatement. He says it himself, “It’s the same… just black”. Still, it looks really freaking cool. Then, Val even gives him his new name! “Things are about to get weird and we’re not going to need Captain America. We’re going to need a… U.S. Agent!”

So with all of that out of the way, John Walker has completely transitioned to being U.S. Agent! This is all on the heels of him redeeming himself! He was actually a huge help in the final battle with the Flagsmashers. When push came to shove, Walker made the right decision to try and save the hostages. That earns him at least a few points if you ask me.

Are you excited to see where  The U.S. Agent will pop up next? Are you relieved John Walker finally becomes The U.S. Agent? Did you enjoy the finale on Disney+?