Arguably best-known for his role as Dr. Perry Cox on NBC’s Scrubs, John C. McGinley will be making his return to television in a new horror-comedy series on IFC called Stan Against Evil.  Fan Fest News was lucky enough preview the first two episodes and participate in interviews with series stars McGinley and Janet Varney (You’re The Worst, The Legend of Korra) as well as the series creator, Dana Gould (The Simpsons) during the show’s New York Comic Con premiere.

While having lunch with Pete Aronson, Executive VP at IFC, Gould was told, “you should write a funny X Files.” To which Gould replied, “I kind of just did.” After some minor editing, the legend of Stan Against Evil was born.

McGinley plays Stan Miller, a police sheriff who, after a strange and emotional outburst during his wife’s funeral, finds himself unemployed and feeling alone for the first time.  When strange things start happening within the town, Stan soon discovered that his wife was a witch hunter.  She secretly spent her nights protecting him from a curse cast upon the town centuries ago because of a constable who burned 172 witches at the stake.  Evie Barret (Varney), who takes over Stan’s position as sheriff, soon also discovers the town is over run by demons and witches.  Together, the unlikely pair is forced to team up to banish evil from their town once and for all.  Check out the trailer below for a sneak peek at the series:

The series has been compared to Ash Vs Evil Dead however, Gould says the two are tonally different.  Gould describes the shows as being in the same family but, not the same.  Cousins perhaps, though he said that he draws more inspiration from films like An American Werewolf in London and Shaun of the Dead.

The character of Stan Miller is based on Dana Gould’s real-life father.  He’s a bit gruff, has some hilarious one-liners and, according to McGinley, now that Stan is retired,”he just wants to get back to his recliner, watch the history channel and have a beer.”  McGinley’s performance truly embodies this character and it’s difficult to believe the role wasn’t written specifically for him.

A scheduling conflict almost prevented McGinley from accepting the role however, thankfully, filming was pushed back 3 weeks which helped to accommodate his schedule.  McGinley said that the script was so hilarious and perfect that he couldn’t pass up the opportunity.  When asked how he brought the character of Stan to life, McGinley humbly replied:

“I play mostly from the page.  Especially, when it’s this good. If you’re on Scrubs and Billy Lawrence is writing something or if Oliver [Stone] is writing Wall Street, I like to stay on the page and then, I bring a little flavor in the transitions.  Everybody thinks I’m Mr. Improv and I’m not.  I just like to add a little flavor in the addendum of the scene but first I like to say what’s on the page, if it’s good.”

“Good” is a severe understatement for McGinley’s performance in the series.  His comedic timing and delivery makes you love this character while his dedication and commitment also comes across strong.  It’s clear to see the rest of the cast feeding off of his energy during the first two episodes. 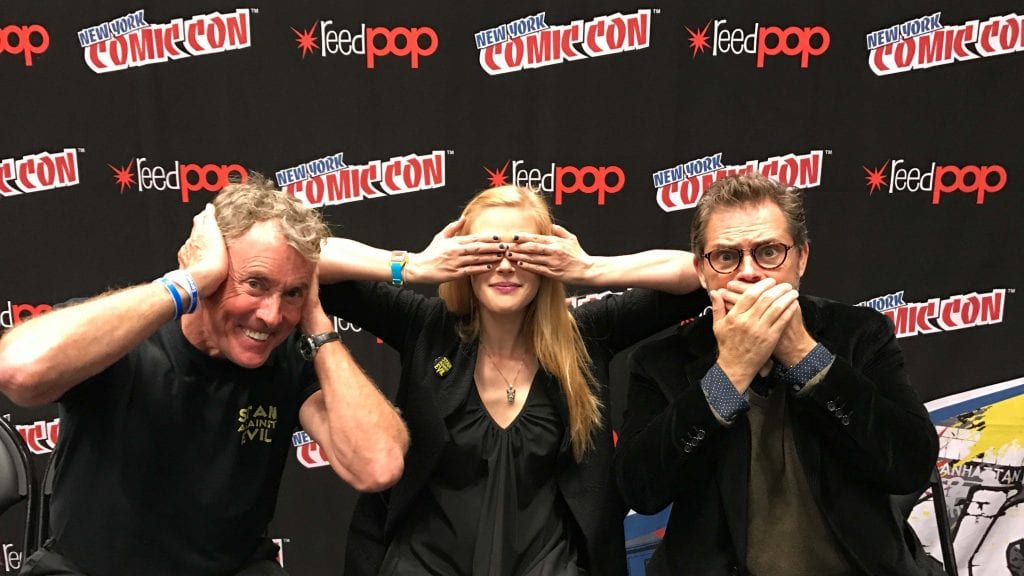 Equally as impressive is Janet Varney’s performance as Stan’s replacement/sidekick, Evie Barret.  Gould informed us that the role was written specifically for Varney however, she speaks of the opportunity as “a dream come true.”

“For me, I wanted it so much because he [Gould] told me about it when he first started working on it.  You know, I would show up to read a phone book with Dana Gould so, much less be given the opportunity to play this kind of action hero.  That he would see me in that light is, I can not sit on a panel with Johnny C (McGinley) and Dana and have them talk about enjoying my performance without getting super choked up because I don’t take it for granted for a second.  It’s just such an amazing experience and I don’t think I really thought that I would be asked to do that kind of role.”

Stan Against Evil balances these small town action heroes, horror and comedy so perfectly, which is something tremendously difficult to do.  Too much comedy and the horror aspect seems cheesy and lame.  Too much horror and the comedy seems out of place and awkward.  McGinley commented on how working on a show with these dynamics compares to his past role on the TV show, Scrubs:

“Like in Scrubs, when you’re trying to straddle comedy in a hospital and not invalidate people’s pain and their loss, that is to Scrubs as comedy and horror are in Stan.  What I mean is, I wanted the show to be funny as hell and scary as shit. Like in An American Werewolf in London, for the comedy not to invalidate the monsters.”

While watching the show, I definitely found myself laughing out loud and also jumping with fright which was the same reaction of the New York Comic Con attendees who filled the panel room (I mean FILLED!  There was not an empty seat in the place which is rare for a show that isn’t even on the air yet) for a special screening of the first episode of the series.  If you are a fan of horror and/or comedy, you are definitely going to want to check out this show.

Stan Against Evil premieres on IFC with two back-to-back episodes Wednesday, November 2 at 10 PM and 10:30 PM.  The series will run for 8 episodes in the first season with potential, according to Gould, to run for a total of 172 (the number of witches which Stan will need to battle) episodes, at least. 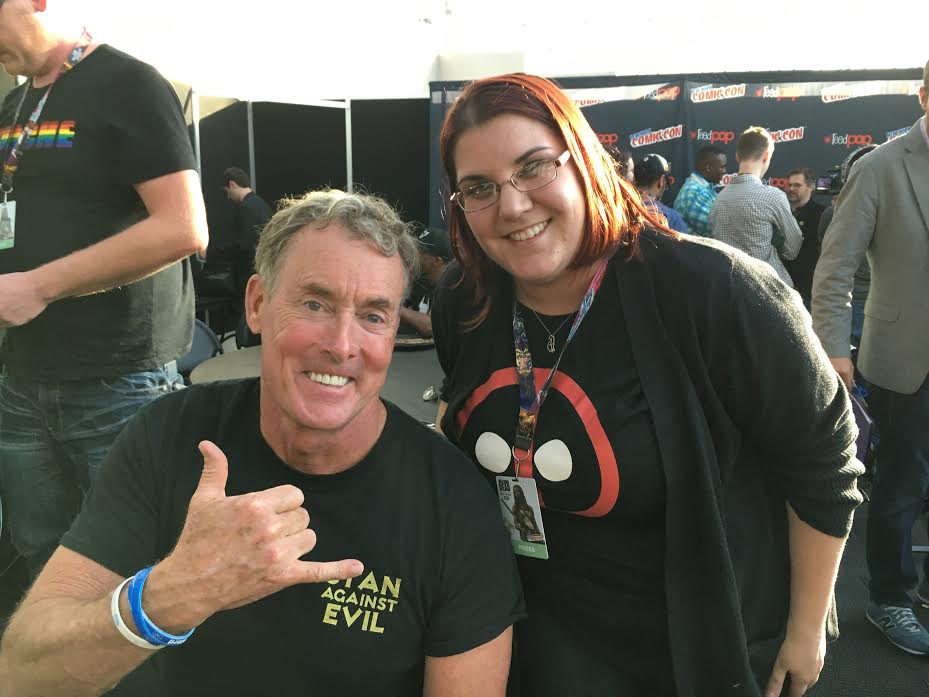