Jenna Elfman and Garret Dillahunt play June and John Dorie on Fear, and had flown in from filming. It didn’t stop them from talking about their beloved characters and crossing off a ton of fan questions.

She was asked if she knew people wouldn’t trust her to begin with when she first made her appearance on the series.

When they asked me to come on the show,  I got on the phone with Scott Gimple and asking about their plan for season 4, the complexity and the degree of loss she was experiencing. I though wow, and I wanted to explore that. So I was focused on that. I didn’t realize I was going to come off in an un trusting way. People have their spectrum of emotions. 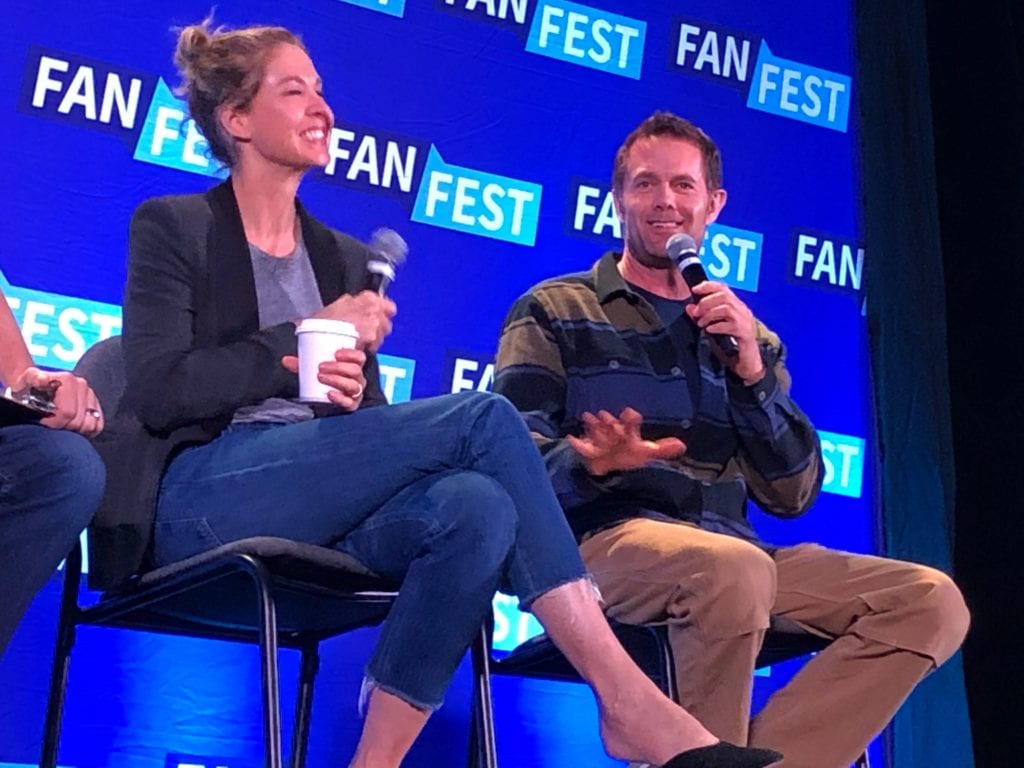 She went on to say that she makes many on set decisions with the fans in mind,

I think it was part of the learning curve of being in this mythology. I had such an empathy for her backstory which the audience didn’t know yet. It’s my first experience being on a fandom type of show. Now when I’m filming, all I think about is you guys. I’m doing this for myself and for you guys. I love the artistic journey but I am a fan too, so I’m imagining you guys will be experiencing every choice I make right now. How can I take you on an emotional journey the most.

One specific example of her thinking of the fans was during the scene when John and June reunite at the end of the season.

When we finally connected at the hospital via walkie talkie. The fans have been dying for us to get back together, but when we’re finally in the SWAT van in the same space next to each other, that’s the first time the fans are seeing us physically together. I need to touch him the and need us to touch. I said “I’m gonna grab his hand. and they were like, Yeah great!” The very last thing in the next episode was that they wanted to get that and squeeze that in. it was the last shot of the season. I felt like visually they (fans) needed to have that.

Garret was asked about The 4400 and talked a little bit about the upcoming reboot for The CW. He said he’d be down to be. That led to a fan asking if he and Jenna are worried about being killed off Fear. They are both enjoying the time right now, and say they are happy to be on the show as long as it will have them.

I feel fairly safe. I don’t need to play my immunity idol just yet. Garret says.

This is the hardest job I’ve ever done physically and I feel like I’ve one a lot of fight scenes. This is the hardest because most of the time were out i the elements. Any time, day or night, we’re in it. You feel pretty brutalized. If there’s a legacy of these shows it seems to be the people they get. They are pretty extraordinary. There’s no one I don’t like that i work with.

He says they owe a lot to the creators of The Walking Dead too,

I think owe a lot to Andy, to Scott, to Angela who has really had a hand in trying to keep this vibe alive.

The two, who were so experienced that they didn’t actually have to audition for the show themselves, raved about working with Lennie James,

I don’t know if there’s a more giving actor around. I like actors that aren’t afraid of anyone else being good. Brad Pitt is another one. Most actors do that, but he watches out for you on set. There was a moment (during his first scene) when a crew member was taking a wee in full light. Lennie was so annoyed “Oy have you ever been on a film set before?” I felt really happy that he was looking out for me. He’s got a value thats even greater than what’s on the face. He’s a very valuable asset to the show.

I still haven’t figured out how to articulate that experience. What comes out of him when he’s acting; it’s jaw dropping. Even if I’m not in the scene I just watch him because I feel like there’s so much I could learn from him. You don’t see any effort in preparing. He radiates this artistic charisma that blows my mind.

On merging the two shows, Jenna says putting them together wouldn’t make much sense, but if she had to move over to Walking Dead, she’d love to live at Alexandria or Hilltop. She also says she’d love June to get in with Negan and set him straight.

Fear The Walking Dead returns in 2019 and is currently filming its 5th season.