Jeffrey Dean Morgan’s family are just invading The Walking Dead, aren’t they? Funnily enough, Morgan’s wife, Hilarie Burton Morgan, played the wife of Negan, Lucille, in the season 10 finale. The episode was a huge hit and was some of the best Walking Dead we’ve seen in a long time. The episode was so successful that AMC is now gauging the interest in a spin-off all about Negan. The spin-off would theoretically follow Negan as he builds the saviors. We’re hoping for a confirmation that that will be a thing eventually, but for now, there’s something else we can share. Jeffrey Dean Morgan’s son will be joining The Walking Dead with its final season. Season 11 of The Walking Dead is currently filming out in Georgia. I repeat, Gus Morgan is joining 6 season 11! Jeffrey Dean Morgan shared this image of himself and his son on Instagram. Look how happy they both look, it’s freaking adorable! Hopefully, the young one doesn’t cross Negan, or he’s gonna have to go the way of Glenn. 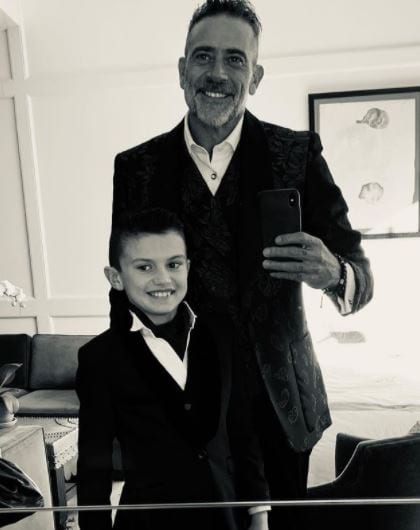 “Gus Morgan, my 11-year-old son, is going to be the featured walker in Episode 5,” he said on The Late Late Show with James Corden.  “He’s been getting his Covid test so he can be on set and all that. He is so pumped. I just remembered today that last time we did zombie makeup — he’s gonna be a walker and have all the stuff done, and it’s kind of a cool little role he’s doing in the show — the last time we did any zombie makeup on him he looked at his reflection in the mirror and passed out (laughs).” The act then clarified, “That was a few years ago so I’m hoping he doesn’t pass out this time around because the makeup is gonna be extensive and cool. But he’s so excited.”

You can catch The Walking Dead‘s final season this August on AMC! And thanks for the news, Jeffrey Dean Morgan!