When Viola Davis is mentioned all I can ever think about is one bad ass lady who takes nothing from anyone! She is a two time Oscar nominated actress and was the first African American woman to win the Emmy for best actress in a drama series, the respect she demands when she walks into a room is well deserved!  In a recent chat with  EOnline Davis discussed working on the Suicide Squad set and of course no one can talk Suicide Squad without hearing about Jared Leto’s crazy antics.  In the upcoming film Davis plays Amanda Waller, she is in charge of a government agency called A.R.G.U.S. and is responsible for the formation of the Suicide Squad. 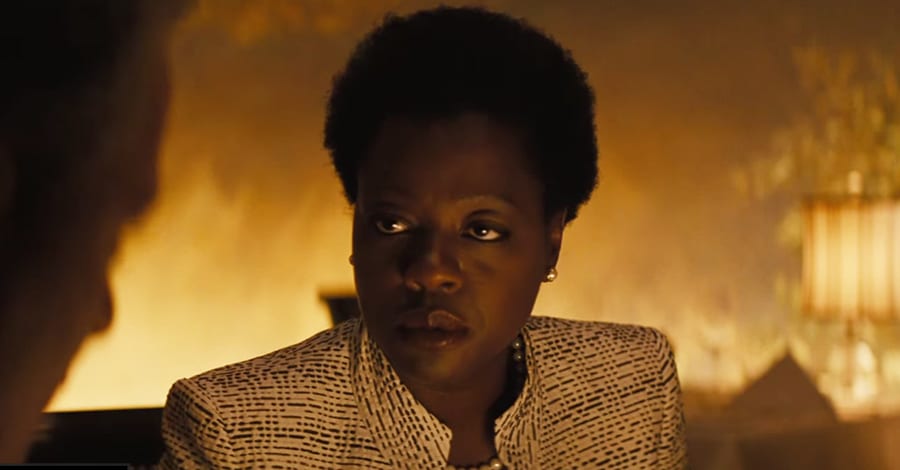 Since production began David Ayer has been super hyped about how amazing Jared Leto’s Joker is going to be, that he went so deep into the character he was sending terrifyingly creepy gifts to cast mates! Davis was not excluded from that madness she revealed to E that Leto (The Joker) sent her a box of bullets, as he was method acting essentially he was a psychopathy. It would be a little unsettling to even the toughest of the tough to get a threatening message like that and not be effected at all. Davis was no different, “It made you a little bit nervous and I’m pretty tough. You know I got into a few fights when I was growing up…but it scared me a little bit.” The entire set must have been a little worrisome as everyone in the cast is not a good guy. The Squad is presumably the protagonists, but as Harley says in the trailer they are bad guys! If the Squad is the protagonists then the antagonists have to be even worse, and really Waller is about as bad as they get in a lot of people’s minds. A woman who will go to any lengths necessary to complete her mission. Davis talked about what it was like working on a set where everyone is just different degrees of bad and all the actors were encouraged to embrace the madness inside of them to bring these characters to life.

“Every single person in it gets to be completely insane because all the characters are insane,” Davis said. “They’re bad guys. We’re all bad guys.”It got so crazy that there were times during filming that I had heart palpitations–not only heart palpitations but at one point I said, ‘Did I suffer from hearing loss?'”

When a movie like that wraps how do you come in professional contact with these actors who were villains for months of their lives? Well Viola Davis the true BA that she is will pepper spray you if she feels you need it. The first time she came in contact with Leto after the wrapping of the film was at Glamour Magazine event,”Before that I was only introduced to The Joker…and I almost had my pepper spray out. You know, ‘You remember that bullet you sent me?'” Lucky for Leto he has hopefully shed his Joker persona enough to keep himself safe from Viola Davis! It seems to have gone okay as Leto is still walking around! As we get closer to the Suicide Squad premier I have big hopes that Leto’s performance will blow me out of the water and hasn’t been over hyped by Ayer and the media. I want him to be good, but am terrified that after all the hype it will be a let down. The silver lining to that feeling is that most people felt that way about Heath Ledger before The Dark Knight was released and his performance is unparalleled. Hopefully Ayre and Leto created something unique and amazing that those of us who have seen all the different comic iterations of The Joker can appreciate.