It really is quite the year to be a horror fan, as Blumhouse Productions will be pushing out yet another film later this year – Halloween. The best part of this upcoming movie, a reboot of the 1978 John Carpenter classic, is that Jamie Lee Curtis returned to the set to once again reprise her role as Laurie Strode.

We are quite eager to see Jamie Lee Curtis face off once more against the diabolical Michael Meyers, 40 years after their battle in the original Halloween movie.

Recently, Jamie Lee Curtis took to Instagram and posted a photo indicating that she has wrapped her role on Halloween. 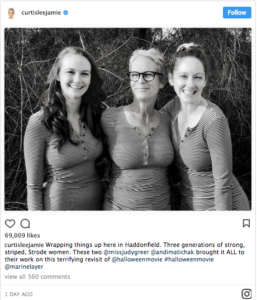 Although it would seem as though Jamie Lee Curtis has wrapped her role in Halloween, it’s unclear as to whether or not the overall film has completed shooting; which brings up the question… how big is Curtis’ role in this movie?

One other thing that may come into play is that this Halloween reboot does have two other Strode women in it as well. The film will also follow Laurie’s daughter Karen and granddaughter Allyson, who will be played by Judy Green and Andi Matichak respectfully.

Halloween will arrive in theaters October 19, 2018.

‘Halloween’ Sequel Filming has been Delayed until January

‘Halloween 2018’ will ‘ignore’ all films after the Original

Can You Imagine the ‘Halloween’ Franchise Without Jamie Lee Curtis?