For the past few years, Marvel has been absolutely slaying it when it comes to their media productions; both their movies and their Netflix series. We have the upcoming Thor: Ragnarok  and Guardians of the Galaxy to look forward to in theaters this year, and The Defenders will be making its debut on Netflix in August as well. Essentially, it looks like it is going to be a fantastic year of Marvel Entertainment Studios’ all around.

Since Marvel has been so successful in bringing their comic book characters to life, fans have been making listicle’s and compiling lists in regards to which character they would love to see come to life next. Now, even directors themselves are making pitches to Marvel in regards to which characters they want to see. Earlier this year James Gunn, director of the Guardians of the Galaxy series pitched an idea of his very own. He pitched the idea for a Marvel comic book character not known to many people (who also ironically happens to be my personal favorite):

After this tweet, fans immediately began retweeting and responding to James Gunn. Since he did such an amazing job with Guardians, he would most certainly do a fantastic job at bringing Moon Knight to life. A fan page (MCU News) was quick to react to the post, telling James he should absolutely make the request to Marvel; and James was quick to respond. 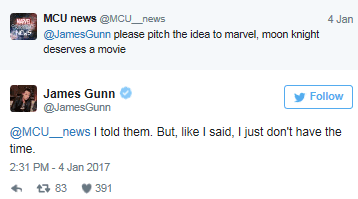 So the good news is, James Gunn is a highly successful director and I’m willing to bet that Marvel has taken his recommendation pretty seriously. Maybe once he completes the Guardians series, they will bring him on board. Ever since James’ tweet was put out on social media, many other fans have begun stating their want for a Moon Knight movie all over social media; Twitter in particular. 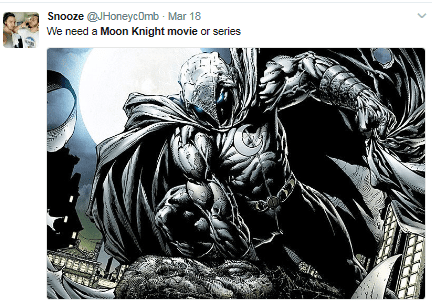 For those of you who do not know the character of Moon Knight, he is pretty complex to say the least. Moon Knight, known as Marc Spector was the son of a rabbi who escaped Germany when Hitler invaded; fleeing to the United States. Marc eventually enlisted in the Marines, and joined the CIA after completing two tours of duty as a field agent. Following his time in the CIA, he became a mercenary and he enlisted the help of a partner “Frenchie” Duchamp. They were given a mission in Sudan for Raoul Bushman. During an operation in which Bushman attempted to slaughter an entire village, Marc couldn’t stomach the relentless murder anymore. He challenged Bushman, and wound up getting beat to almost the point of death. Archeologist took him to the Egyptian Pharoh’s tomb, and laid him beneath the idol of Khonshu; the Egyptian God of Vengeance.

Marc’s spirit encountered Knonshu, who agreed to save his life in exchange for his service. Marc agreed, so Khonshu resurrected Marc,  and blessed him with superhuman powers and abilities under the Moon. Marc moved back to New York, taking the idol with him. There he designed the costume, fashioned up his own weapons and gear, and took on the Persona of Moon Knight.

Now here is where the character gets just a wee bit complicated. If you have seen the movie Split, then you’ve somewhat familiarized yourself with a multi-personality disorder. Already having the persona of Marc Spector, and Moon Knight, he eventually used his fortune as a reason to create a third persona by the name of Steven Grant; a financer. Now in love with the idea of fighting crime under the moon light, he realized he needed to create another personality to gather information at a street level, so he made Jake Lockley; a cab driver. Leading four separate lives put great mental stress on Marc, but he refused to quit. After all, he DID promise a God that he would do as he wished.

Although many would consider him a ‘psychopath’, he never did lose his heart or his sense of righteousness. Spector’s first major job as Moon Knight came when the Committee hired him to capture a werewolf named Jack Russell. However, when he learned that the Committee planned to turn Russell’s sister into another werewolf and use them both as weapons. He did the honorable thing and switched sides; Spector and Russell shut down the Committee.

Moon Knight had several encounters with some of our other Marvel favorites, most notably with Spiderman. He also became a member of the West Coast Avengers.

Now, while I think that it would be pure awesomeness to see Moon Knight on the big screen; I personally believed Moon Knight is a character designed for Netflix. The character is so incredibly complex and there is so much background story, that I feel a 2-hour movie would not be enough to do the character justice. This way with a Netflix series, or maybe just a general mini-series, we would still get the excitement of seeing the character come to life. Also, the Moon Knight comics and trades have a tendency to be pretty violent; which is another reason as to why I think they should bring it to Netflix. Think about the Daredevil Netflix series compared to the movie; Netflix was able to do so much more without having to worry about a ‘rating’ scale.

Then again, Fox was able to capture Deadpool to perfection… so maybe if they were to pick up the film with James Gunn as the director, they could find a way to do the character justice. However, Marvel has split character rights with multiple studios, and it is not 100% clear as to who would pick up the rights to Moon Knight.

For now, there has been no real chatter on Marvel’s end in regards to this character coming to the screens; big or small. Personally if I had to pick an actor as to who I think would be excellent for this character; I would have to go with Michael Fassbender. 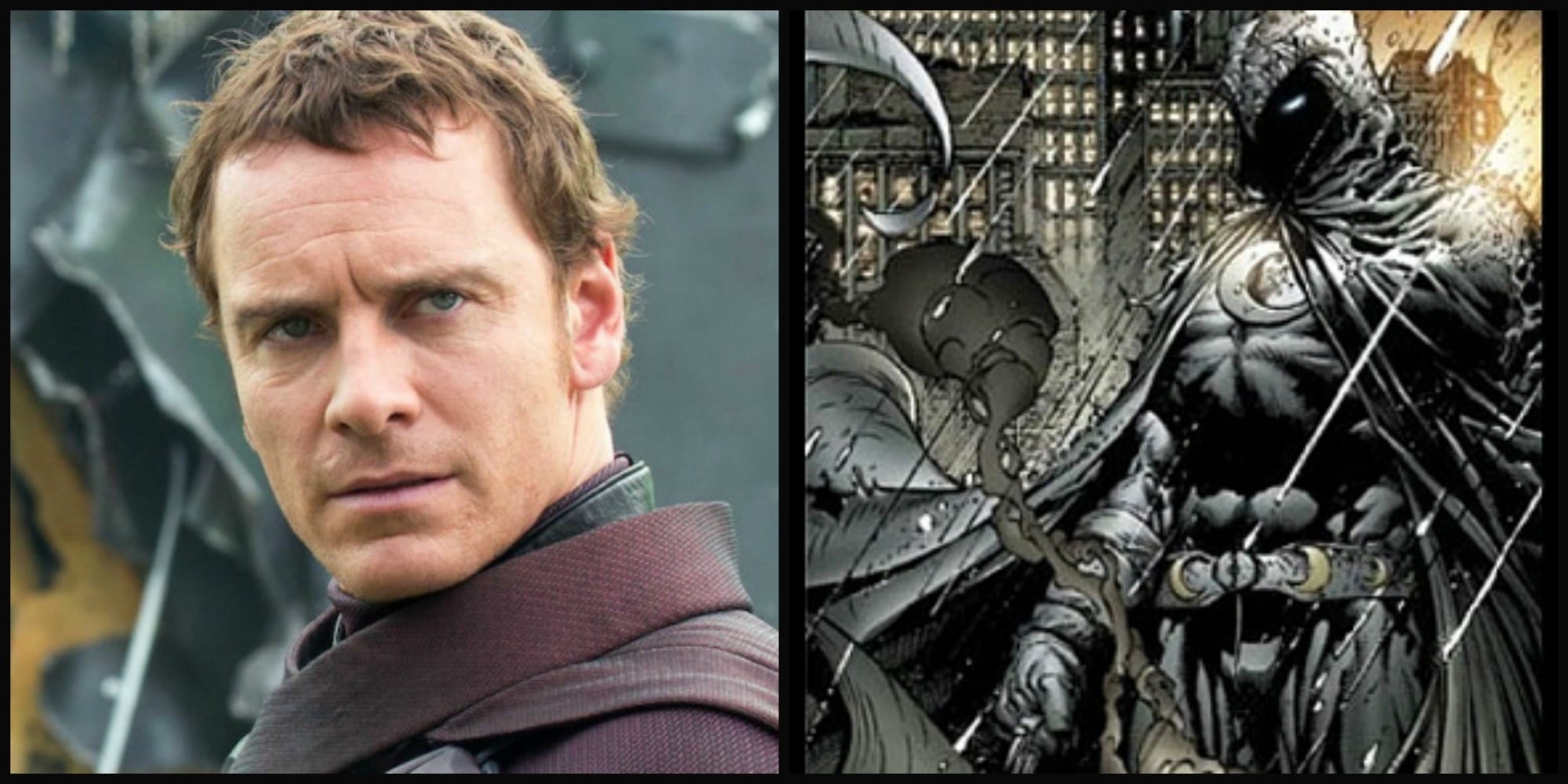 We’ve already seen Fassbender in the Marvel Universe, taking on the role of Magneto in the X-Men: First Class film franchise. So we know that he is already fantastic at playing the role of a ‘bad guy’, so why not see the tables flip and see him as a hero instead?

So while no live movie plans for the Moon Knight character have been announced, here is a short clip for you to enjoy of Moon Knight when he made his appearance in the animated Ultimate Spiderman series, in the episode ‘The Moon Knight Before Christmas’. If you can watch the entire episode, I think you will find it highly enjoyable.