Along with Josh Gad, Luke Evans and Dan Stevens, who starred in the recently released live-action film, The Late Late Show’s James Corden put on a hilarious but amazing performance of ‘Crosswalk the Musical: Beauty and the Beast.’

Stopping traffic, performing between green lights and in the middle of the crosswalk on Beverly Blvd. and Genesee Avenue in front of the CBS studios, Corden donned on a full costume as Belle herself and began with singing her opening number ‘Belle’. Luke Evans and Josh Gad followed, along with an array of dancers, with their performance of ‘Gaston’. Next, Josh Gad, Corden and dancers performed ‘Be Our Guest’ as Lumiere, Belle and silverware. 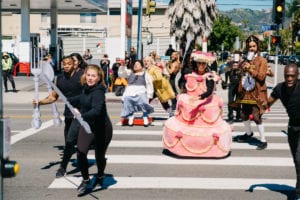 Jokingly, Gad had this to regard his performance of Lumiere, “Interestingly enough, I didn’t get to play this part in the movie and I’m actually kind of glad. Because who wants to do it in front of millions of people in a film when you can do it in front of half a dozen Lyft and Uber drivers here.” 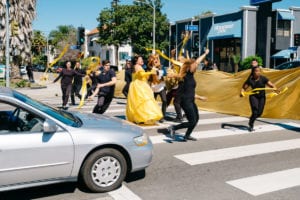 In front of dozens of confused and surprised commuters, Corden, wearing Belle’s full-length ball gown and a reluctant Dan Stevens, wearing a Beast head dress hoodie, ended by dancing a waltz to the title song ‘Beauty and the Beast’ and almost sealing their finale with a kiss before being forced off the street by honking motorists.

This is the Late Late Show host’s fourth musical crosswalk revival, with the others being Grease, The Lion King and The Phantom of the Opera. Corden also has his widely popular carpool Karaoke so he is always game for a little silliness every now and then. 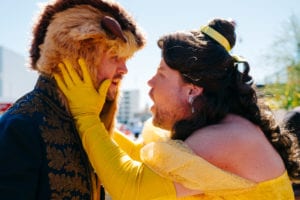 You can watch The Late Late Show With James Corden, weeknights at 12:37am EST/11:37pm CT on CBS and stream full episodes on CBS All Access.

Home » Featured » James Corden Stops Traffic with His ‘Crosswalk the Musical: BEAUTY AND THE BEAST’