Speculating on who is going to play an iconic role is always a fun game. James Bond being one of the most iconic roles of all times, the super spy has always been played by a white male. In the last few years people have been speculating who will take on the title of 007 after Daniel Craig turns in his license to kill. The top three candidates to this date have been Idris Elba, Tom Hiddleston, and Tom Hardy.

A hashtag appeared on twitter #NextBond the usual suspects appeared, but then out of the darkness of twitter Gillian Anderson fans decided it was time for a lady Bond! She got enough mentions that Gillian herself decided to join in on the fun. She tweeted a fan made poster of herself photoshopped into a Bond poster. 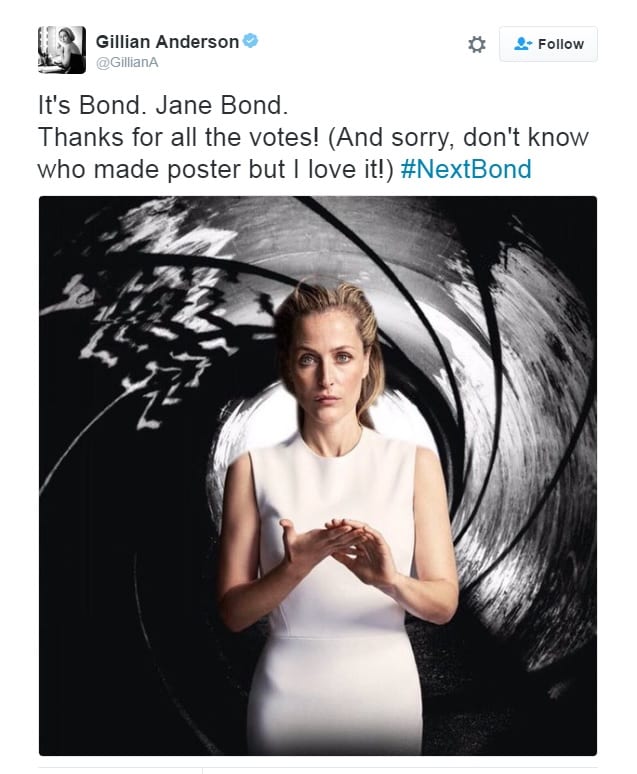 Now I have never been the biggest Bond fan, suave ladies man isn’t my type. A suave lady, slaying bad guys who could take or leave the guy at the end, that would be a fun role reversal that I think would be refreshing to see in Hollywood. I also think if they were going to go that direction Gillian would be a fun choice, though she isn’t European as all Bonds have been before. She has proven she does British rather well, her role as Stella Gibson on the BBC crime thriller The Fall has been a pleasure to watch.  What do you think, is the world ready for a Jane Bond or will we forever see a white male in a nice suit? I am all for seeing one of the fellas up there be Jane Bond’s “Bond Girl”!