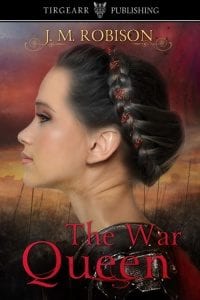 J.M. Robison is a hard-core fantasy writer, having written 7 books (all fantasy). The most she’s ever done in branching out of that genre is write a historical fantasy. She first got her love of fantasy by reading the Dragonlance Chronicles by Margret Weis and Tracy Hickman while growing up. Also a hard-core introvert, JM doesn’t understand how she retained real friends to this day because of how much she prefers the solitude and the friends of her imaginations. 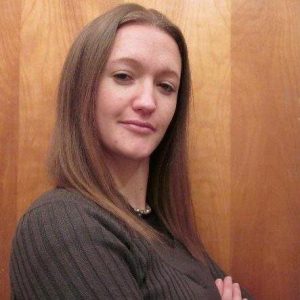 The War Queen is her debut book and she has no other claim to fame; growing up in Bennington, ID (You’re lucky if you can find that small town on a map), she didn’t know what wireless internet was until she was 21 and the closest Wal-Mart was an hour and a half away. Having joined the military at 17 with a deployment to Afghanistan and Romania, and working as a Deputy Sheriff in Nevada, she’s seen a lot of people and been to a lot of places; the evidence of which frequently bleeds into her writing.

Her goal in life is to quit her job, write books, and be happy. I had the pleasure of interviewing J.M. about her life and new book, “The War Queen.”

Michael Garone: Who or what inspired you to become a writer?

J.M. Robison: I wanted to emulate my big sister at a very young age (6, I think.) I followed her up trees, across fields, down snow hills, and I wrote my first story because I saw she’d written one. Big sister paints now, and my love of writing has moved beyond wanting to emulate her to wanting to explore other worlds. At times I feel trapped in my body, so writing has become a sort of therapy for me and helps me “get out.”

MG: What can you tell us about The War Queen without giving too much away?

JMR: I conceived the idea for The War Queen in 2008. I’d gone for a midnight walk alone up the hill to the pillars above ISU campus in Pocatello, ID. I’m fairly imaginative and always creating stories and scenarios in my head, so while sitting beneath the pillars by myself, I imagined that some god had fallen on the pillars and that’s why they were broken.

One thing to understand about me as a writer; I’m a pantster 100% (which means I write by the seat of my pants instead of having a clear outline before I begin the story.) For me, as long as I have a shady beginning, questionable middle, and blurry ending, I dive in and begin writing. For The War Queen, I had a beginning and a middle, but no ending. This usually isn’t a problem for me, since I’ve never had trouble creating the story as I write it, but though I had the story planned out to about the middle, I had zero idea what the 2nd half was going to be about, and never mind the ending. So I stopped writing.

I sat on The War Queen for seven years. I mused about it sometimes, but it stayed in a notebook shoved in my bookcase and I really can’t say how it survived four moves. I wasn’t writing it and really didn’t care to finish. I don’t know why I kept the notebook. I’d only written 30 pages.

I was on writing.com one day (a great writing website to find beta readers and enter fun contests, as well as read works by new writers), browsing through their contest listings where I found a short story contest. “Well,” I thought, “I’ve only written 30 pages in The War Queen and have no idea how to continue, so I could turn it into a short story, I guess.”

I started working it together in my mind how on I wanted this short story to go. In the process of thinking about it, this thought punched me in the throat: “Kaelin kidnaps Altarn.” An explosion went off in my head, and idea after idea tumbled into my hands and within 3 hours (I was at work at the time and terribly distracted), I had a step-by-step process on how my story would proceed in the second half all the way to the end, to include all my side characters, their names, and word-for-word dialogue. I’ve never had a story come so clear and easy to me before.

I didn’t enter that short story contest. But I did get rejected 40 times in my pursuit for a literary agent to represent The War Queen. It didn’t help that I was pitching it as a fantasy and not a fantasy ROMANCE, because I didn’t know I’d written a romance. To make that problem worse, I hate romances. I find them predictable and cheesy, so I was floored when 3 of my beta readers told me, “What a great romance!”

Romance? I didn’t write a romance. I wrote a fantasy.

Wanting to prove them wrong, I googled the elements of a romance… and The War Queen qualified. I was so mad. It took me 3 months to come to terms with this. I’d been rejected for publication 40 times already, and when I started pitching my story as a fantasy romance and not just a fantasy, 2 agents requested to read my whole book and I secured a publishing contract with Tirgearr for it.

So that’s the long journey in the creation/publication of The War Queen. If I’d given up after the 47th rejection, I never would have secured my publishing contract on my 48th try, so I’m testament that as long as you never give up, you will succeed, no matter your dreams and desires in life.

MG: What makes “The War Queen” stand out more than other books of the genre?

JMR: The War Queen centers on the minority class of females in positions of great responsibility. I compare Altarn’s position to our current day President where Americans are facing the reality that females can and are running for President. Female heroes are also rising in comic books and Disney has recently revamped some old favorites with independent females. Being a Staff Sergeant in the U.S. Army, I have personal experience knowing how it feels to be in positions of responsibility and lacking support from my male counterparts, treated with bias, even. But in all things you never give up, and you trust your heart, and when doubters say, “You can’t,” you draw your sword, say, “I will,” and charge forward anyway.

MG: Of all the characters you have written about in your life, which one or two did you connect with the most?

JMR: All of them. Every character has a bit of my personality in them, be it villain or hero. But if I have to narrow it down to 1, I would say I connect most with Lady Altarn in The War Queen because she’s a reflection of how I feel being in a position of leadership in the military: her fear of not doing a good job, how she has to fight to be heard, and at the end when she tries avoiding her love interest? I literally ran from my now husband when he met me because he was trying to ask me out on a date and I was nervous. Suppose that insecurity bled into Altarn. Like mother like daughter.

MG: Can you elaborate on your next book?

JMR: Yes, please! I’m REALLY excited about this one, and beta readers are asking when it will be in print/made into a movie. My next book I will pitch for publication is called The Last Wizard. It’s a historical fantasy romance based on the Victorian Era, and one of my characters has been locked up since the Middle Ages (324 years) and is finally freed. Here is a brief excerpt about it:

Wanting to track down Reuben’s murderers, a corset-hating girl of 1842 England follows a map Reuben left her but finds instead a wizard imprisoned during the Middle Ages. Now Brynn is in danger by Reuben’s murderers for freeing the wizard, the wizard is in danger by those who want him locked up again, and they are both in danger of becoming forbiddingly attracted to each other. Because the wizard is the last one, upon his death a creature from the Fae Realm will infiltrate Earth and consume everyone. Finding more men to become wizards to prevent this is easy. Avoiding the church who wants him dead isn’t.

The book is written in 1st person and my wizard in question speaks Old English since he’s from the Middle Ages. I also based this book off real historical events, like the 95 Theses and the War of the Roses.

JMR: Aside from The Last Wizard, I have a 5 book fantasy series called The Lost Gods, and the premise for that is a god made a mistake and he spends the entire 5 books trying to fix it which had a butterfly effect across my entire fantasy world.

Here is the synopsis of her new book, The War Queen.

300 years ago, the people dethroned their king and queen to prevent another tyranny. Now instead, the people nominate a State Head every three years and Altarn is the first female to hold the position. She’s used to tolerating the biases of men but Kaelin, the State Head of his territory, has declared her incompetent and has even, according to Altarn, threatened to steal her land – she believes he wants to make himself king. Believing she must “dethrone” Kaelin, Altarn rides to her last ally to ask for aid in the war against Kaelin she knows is coming.  But in her absence an army launches an attack… and it’s not Kaelin’s.

Taking advantage of the startling situation, Kaelin kidnaps Altarn so he can take her land without her in the way. Soon realizing he needs her help to fight this army instead, he releases her and, since Altarn’s army is too small to win the war alone, she is forced to accept his help, but payment for his help will be her land. No one believes Kaelin is secretly trying to make himself king, so after the battle is won, alone in her knowledge and lacking allies, Altarn must become the War Queen of legend to dethrone another king… though she unexpectedly dethrones his heart instead.

The War Queen will be released on Oct 14, 2016. However, you can pre-order it now at Tirgearr Publishing.

For more on J.M. Robison you can visit her twitter: @JMRobison

One thought on “J.M. Robison Talks About Her New Book – The War Queen”