One of the most charitable people in the world has launched a campaign with Lumos called  We Are Lumos Worldwide. And to kick it off, Rowling used Facebook Live as the platform.

Rowling as the founder of Lumos, discussed the plan, which is a series of events taking place all around the world to help children leave orphanages and start new lives.

In the interview, she reminds us that this is a “solvable problem. Eight million children is an unfathomably large number… it’s so hard to really take in what that means, eight million…but we can solve it. We absolutely do need funds but we need to change minds. And if we change minds we will change lives,” said Rowling.

Rowling also released a new  limited edition T-shirt where 60% of the price goes to support Lumos programs all around the world. This campaign ends on October 3rd. 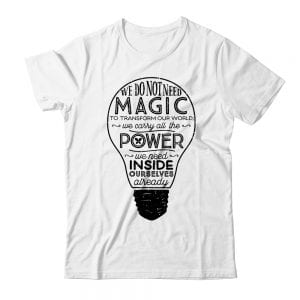 The quote on the shirt is from Rowling’s 2008 Harvard commencement speech.

“We do not need magic to transform our world; we carry all the power we need inside ourselves already.”