When Hollywood Game Night came back this season, we were most excited about the previews showing The Walking Dead cast, call us biased, but we wanted to see them compete in the challenges. They’re funny, they’re competitive, and they’re extremely close both on screen and off. When they took on the cast of Veep it made for one of our favorite episodes of Hollywood Game Night to date.

For The Walking Dead – Christian Serratos, Josh McDermitt, and Lauren Cohan came to win while for Veep – Anna Chlumsky, Tony Hale, and Matt Walsh hoped to come out on top. Each team also had one non-celebrity contestant. The game was close through each round, only separated by a couple of points at the most, but at the end, the cast of Veep got the chance to go for the big win of the evening! 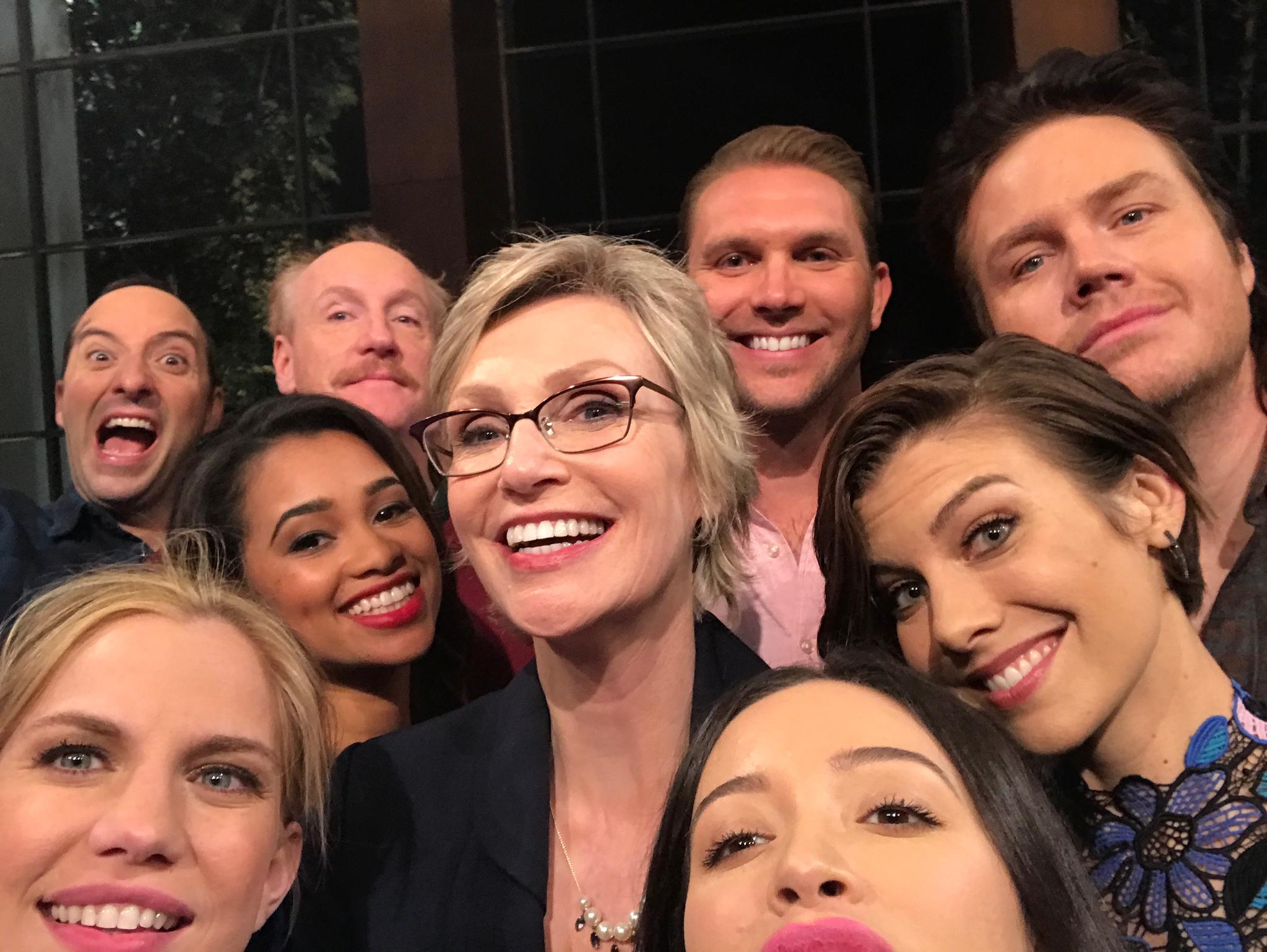 The first game of the evening was Hold My Balls where Josh and Matt had to hold Jane’s balls and if their team got an answer to Jane’s questions right, the other team had another ball added to their stack. Josh fared well in this round, only adding a basketball and a soccer ball but Matt had to hold more balls, two of which were vibrating and ended up losing the round.

Block This Way was next. Each team had to make the tallest wall of blocks with celebrity faces on them, but each was connected to the next. The Veep team took the win with the tallest wall which means they guessed every celebrity connection correctly.

Smash the Buzzer was moved to Jane’s backyard this time, and a ball pit was added. Both teams had to jump to the middle to hold the buzzer when they knew which answer belonged. The Veep team won with this one again, but seeing them all jump around in a huge ball pit was hilarious. We figure the audience were the real winners.

Next up was Monotunes where songs turned into a ‘text to speech’ type sound and the contestants had to guess the songs. The Walking Dead team was up at the end of this round. Josh McDermitt who said he was bad at the game actually played wonderfully.

We also learned a fun fact about Josh McDermitt, once he was playing football and got hit so hard that he…well…pooped his pants. He got carried off the field and received a standing ovation, all for…pooping his pants.

Where Ya Going? was the final game to decide the winning team, and the driver of the ‘car’ had to guess where the passengers were going with only certain clues. They couldn’t just say it, nor could they say ‘sounds like’ or use any words in the name of the place. Needless to say, it made for some funny improv.

The cast of Veep ultimately won, so the contestant playing with them got a chance to win 25,000 during the Celebrity Name Game and one celebrity guest from each team also got to play to win money for a charity of their choice with each correct answer!

Did you catch the episode of Hollywood Game Night? If so, what was your favorite game? Let us know.