Just when you thought nothing could top last night’s Game of Thrones episode and today’s Solar Eclipse, Taylor Swift pulls the most Taylor Swift move, sending her fans into a frenzy. A few days after wiping out all of her social media accounts, Swift released a short video early this morning that seems to depict some sort of snake tail.

This naturally gave Swifties the impression that her new album or a new single would definitely be dropping on the same day as the Solar Eclipse, symbolizing her stepping into a new and completely refreshed light. Many also made comparisons to that time when she was trolled on Instagram with the snake emoji after Kim Kardashian released those Snapchat videos of her approving Kanye’s song.

So now fans think that she is taking that backlash and running with it. 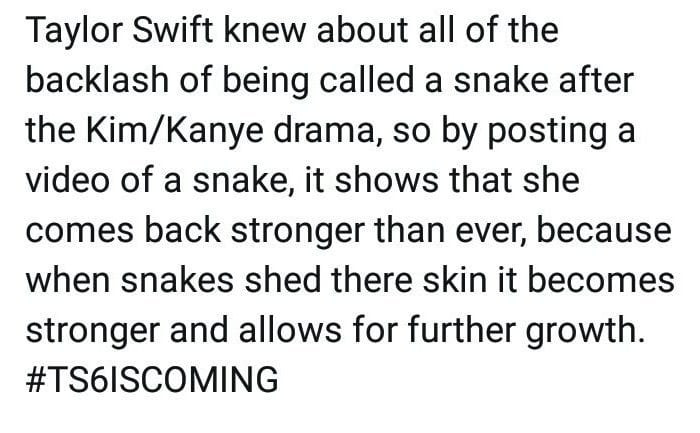 It’s definitely a plausible theory for someone like Swift who loves using symbolic gestures and themes throughout her albums. 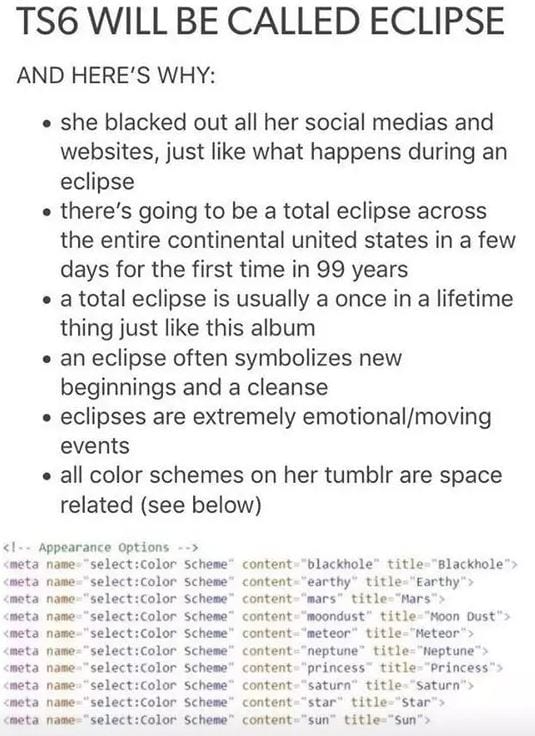 What’s even better is all of the tweets her fans are sending out about how extra it is that she’s upstaging the phenomenon without even really doing anything.

Taylor Swift trying to one up the Solar Eclipse is the most Taylor Swift move of all time. Back on that bullshit.

.@taylorswift13 on her way to release #TS6! #TS6ISCOMING #GameOfThrones pic.twitter.com/z8kbq069Zt

Leave it to goddamn Taylor swift to rebrand herself on the day of the solar eclipse. This is totally some illuminati shit

Taylor swift over here stealing the hype of an actual solar eclipse & I am ALL ECLIPSE WHO? I DONT KNOW AN ECLIPSE. TAYLOR SWIFT IS COMING

trying to focus at work when both the sun and taylor swift are both being extremely extra today pic.twitter.com/Eo8Nmif71l

Everyone else, zeros: Watching the eclipse, taking in the world’s beauty

Me, a hero: Staying online in case Taylor Swift drops a new album

Today I am thankful for Taylor Swift and the eclipse because for one shining day we are tweeting beautiful nonsense. pic.twitter.com/sHB6gTK5Su

Breaking: Taylor Swift somehow manages to upstage the sun and moon during #SolarEclipse2017

The solar eclipse is cancelled due to Taylor Swift tweeting a gif of a snake & coming to take over the world, thanks for your understanding.

taylor swift really just stole the spotlight from the sun

Damn, I had no idea that Taylor Swift was feuding with the eclipse. https://t.co/4h2mx0UaOY

What do you think? Should we expect TS6 to drop today?

Home » Fandom » It’s Taylor Swift Vs. the Solar Eclipse and Her Fans are Freaking Out