For those horror fans that are looking for some pretty terrifying and nail biting films this fall, be sure to add the newly adapted Stephen King’s ‘IT’ to your list of future films.

While it follows the similar storyline of the original 1990 film, there are going to be a few things that are going to be very different. The 1990 film combined a mixture of dark comedy and terror; this film will be focusing heavily on the ‘terror’ side of horror, and the writers, directors and make-up team have designed Pennywise to be exactly that.

Film Director Andres Muschietti says you’re going to see Pennywise from the films beginning, and that it is going to scare the hell out of you:

“There’s supposed to be a less-is-more thing in horror. It’s like you’re not really meant to show the monster. But Pennywise is different. With Pennywise, it’s like, ‘This is the monster, I’m showing it to you…. and you’re going to lay a brick.’

In the past, I would have to say the ‘less-is-more’ concept has certainly been known to work. In the film ‘JAWS’, we weren’t really shown the shark itself until about halfway through the film… however that didn’t stop director Stephen Spielberg from making the film extremely terrifying with suspenseful music, and screaming victims to the beasts terror. It also worked in films such as ‘Jurassic Park’ and even ‘Godzilla’; where the directors used the suspense of ‘what does this beast look like’ to their advantage.

However, I am not disagreeing with the fact that an automatic reveal would be just as terrifying. Movies like ‘Nightmare on Elm Street’ and ‘Friday the 13th’ certainly were equally as terrifying, even with the reveal from the beginning of the film. In all honesty, it’s all about the writing and how dedicated the individual actor is to portraying that character.

Looking at set photos, I would have to agree with Andres Muschietti. This Pennywise looks absolutely haunting and terrifying. Not to knock Tim Curry’s performance in any way (in fact he did a fantastic job), but that version of Pennywise was definitely more ‘comedic’ that the one that is being illustrated today. Looking at those eyes, how could you not get the chills??

‘IT’ has been one of Stephen King’s best-sellers, and the author himself seems extremely excited for the film to make its debut. 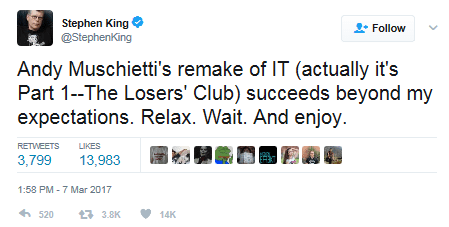 While we still don’t have an official release date for ‘IT’ one thing that we do know is that, just like the original film, it will be broken into two parts. Part I will be titled ‘The Losers Club’.

All we can say is, we are certainly excited for the trailer release this September!