Just when I thought that I couldn’t wait any longer for more news on IT: Chapter 2, I finally got my fill. Not only have they finally cast the Adult Henry Bowers, but they’ve already begun their principal production!

While the cameras may not be rolling yet, there is plenty of stuff in the works – which is good enough for me!

James McAvoy, who has been cast as the adult Bill Denborough, recently shared a snap from the movie’s set to confirm his role for the upcoming horror blockbuster. The snap, jokingly focuses on a Dairy Cheese Triangle.

You get it? Because it takes place in Derry, Maine? 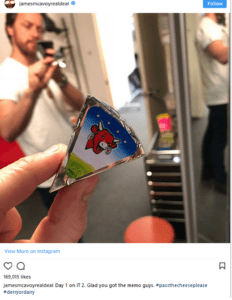 The movie picks up in the present day, 2018, which takes place 27 years after the Losers’ Club took on Pennywise the Clown the first time deep in the sewers of Maine.

Bill Skarsgard will, of course, returning as the wicked Pennywise.