With season 8 just around the corner, New York Comic-Con was abuzz with theories and speculations about how the all out war is going to play out.

AMC hosted a panel that was filled with the usual questions, and one outlier. One fan asked about the Telltale Games’ The Walking Dead series.

Her question: “Are you guys gonna bring Clementine or anybody into the show?” 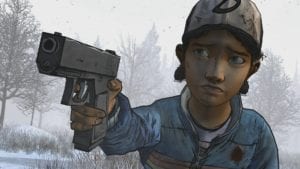 Robert Kirkman was quick to answer with a big “Nope!”

Kirkman went on to add that “we love Clementine and those games are fantastic, but I like that there are different elements to each iteration of The Walking Dead that you can only get in those iterations. Things like Daryl not being available in the comic, Clementine only being available in the games, and I think if we cross-pollenate too much, it takes away from what makes Walking Dead special in all the different genres.”

Would it be great to see Clementine on screen? Of course! But Kirkman has a point.

Would you want to see Clementine on TV?