Welcome dear readers to another rabbit hole dug by another streaming binge. This article is about a series I found on Netflix ‘The End of the F***king World‘. As I watched the trailer that Netflix so nicely plays for you when you pause on the title I was intrigued. First, I have to say that I believe in a past life I was British because I seem to share their same twisted sense of humor and their love of swearing. They seem to enjoy dark humor and I am almost certain that they have a minimum limit of curse words that they must use to make it on T.V. and frankly that is right up my alley. So anytime I find a new British show I get excited plus you throw in a psychopath into the mix and this American is ready to sit down with a bottle of wine and binge watch the crap out of a show. 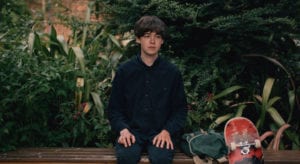 Now I will warn you ‘The End of the F***king World‘ is not going to be for everyone. There is a dark story plot, even darker humor, cursing, attempted sexual assault and murder. If those are not deal breakers for you then we will proceed with the rest of the review. So, we start the show by meeting 17-year-old James (Alex Lawther). James is convinced that he is a psychopath. From a young age he has thought of killing things and as he grew older his thoughts moved on to killing people. Throughout the series, we learn that James feels that his dad Phil (Steve Oram) doesn’t love him and that he hates him ever since James’s mother committed suicide when he was a young boy. James starts killing small animals as a child but at 17 he decides he is ready to kill a human being he just needed a victim. Enter Alyssa. 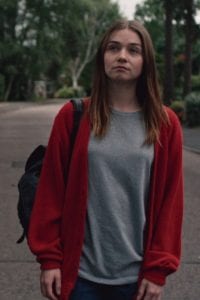 Alyssa (Jessica Barden) is a 17-year-old girl with personality issues and decides to claim James as her boyfriend. Alyssa is trying to find love anywhere she can find it since her father left her at a young age and her mother is married a total (well I can’t put the word here because where it is acceptable in Britain it isn’t here 😉) so I will just say jerk. What Alyssa does not know is that her new-found boyfriend is planning her death as they are making out.

The relationship escalates as the young couple decides to steal James’s father’s car and run away. This is just the first step down a spiral staircase to hell. After they wreck the car and have a disgusting experience with a gentleman who was supposed to be “helping” them, they decide to take up shelter in a house that the owner is out of town. This is where that staircase to hell turns into a slide. The owner turns out to be a “TRUE psychopath” and when he returns he attacks Alyssa leaving James to do the one thing he THOUGHT he wanted to do to…. kill someone. 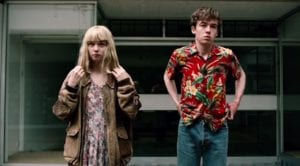 James learns that he was never really a psychopath but unfortunately it is too late and even though they had rid the world of a true monster they were still on the run for his murder. Being on the run, of course, leads to other crimes which leave them at mercy of fate and local police. I will stop here as I do not want to ruin the ending for you. I was saddened by it but I cry at the toilet paper commercials with the bears on it so that is not saying much. 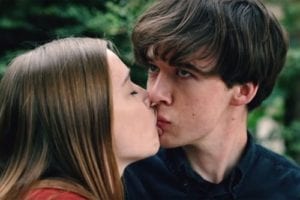 So here is my review, it is a dark dramedy in places. I loved the fact that the two children who felt that they were unlovable were able to find love in the most unlovable partner if that makes sense. What started out as a plan to kill Alyssa is what saved James in a way and in trying to not love James, Alyssa was able to find love. The season is only 8 episodes it will not take a lot of time to burn through the series and since it is “Season 1” it gives me hope that there may be a season 2 and that this season does not end how they wanted you to think it did. I did find out that it is based on a graphic novel, so I will do some investigating on where it goes from here and may update you guys on what I find. If you decide to watch it I hope I don’t let you down.

Check Out What’s Coming to Netflix in February!

‘The Godfather’, ‘Lethal Weapon’ and Other Binge-Worthy Favorites Coming in January To Netflix!

Judd Apatow Returns to Stand-Up for a New Netflix Special