Based on a book by author Ernest Cline, Ready Player One (RPO) will be infiltrating theaters with it’s action-packed, high tech, non-stop nostalgia next weekend! Ricky Camilleri from Build Series sat down with one of its stars Ben Mendelsohn to talk about his villainous role as Nolan Sorrento. Check out some highlights of that conversation right here at Fan Fest News!

Ricky: What was it like the first time you saw it?

Ben: I was stunned. Films always look different than you imagine or think they will when you’re making them but this was like, wow. Then we had a screening in Austin at South by Southwest, and I’m not bs-ing here, it was the best experience I ever had in an audience in my life. I mean they went off, they went crazy. Yeah, it’s a nice one to be bringing to you. 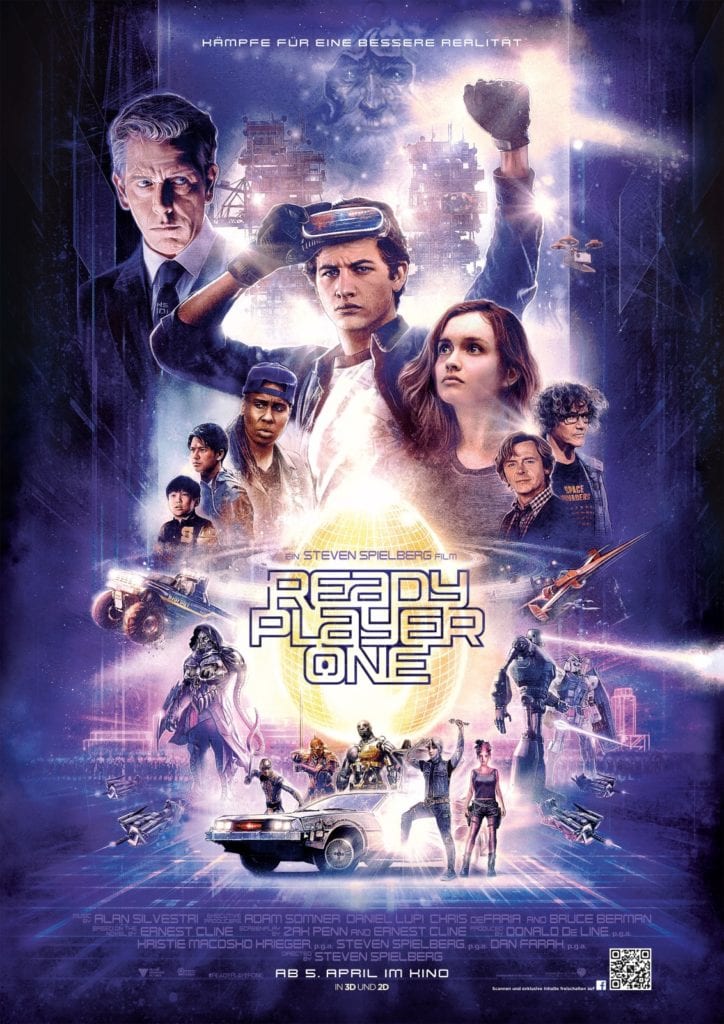 Ricky: Talk about the motion capture that you do in this move. I’m curious how much you had to do as an actor.

Ben: A fair bit. Life sucks [in the movie] basically unless you’re like this guy (points to RPO poster) but everyone else spends all their time in virtual reality running around in this place called the OASIS. For all the stuff in the OASIS, we had to do motion capture. Which basically means you had to get into a leotard with a zipper on it and you put these balls all over yourself and you got dots all over your face which is well and good but then you got Steven Spielberg there directing you. It’s kind of like, it’s awesome. You have this enormous energy, I mean that guy has got a genius for shots and cinema. He has a fanatical love of audience and audience experience. He’s a genius. It’s just awesome to be in one of these films, especially this one.

Ricky: What’s it like to get directed by Steven Spielberg?

Ben: He’s a great audience. He loves what people bring. I sing a lot, he sings a bit… he sings better than I do. When you get something right, when you do something that he likes, it’s awesome. He claps his hands, “Yes, that’s a big movie moment!”. There’s nothing like it.

Ricky: Now this isn’t the first villain you have played. When you get asked to play a villain, how do you make them different each time?

Ricky: What was your breakthrough movie in the states? Was it Animal Kingdom?

Ben: Yeah, without Animal Kingdom none of the rest happens.

Ricky: That is so wild because that is such a dirty character. When you were playing that role did you have any expectations?

Ben: I thought more than likely the film wouldn’t work. I’m a pessimist at heart with all of these things. I take great delight in being wrong about that stuff because David’s [Michôd] film smashed it.

Ricky: Did you have any pessimism while on RPO?

Ben: No. I have high standards and what I like to think of as low expectations. You don’t think things are gonna work out and that way you tend to get surprised. And I got pretty happily surprised. I haven’t watched any films that I’m in before until about a year or two ago. So, I’ve seen this one [RPO] a couple of times.

Ricky: What made you start watching them?

Ben: I wouldn’t say comfortable. I started doing it. It’s like pushups, I’m not comfortable but at some point, you start doing them. You know? (laughing)

Ricky: At this point, when you are getting sent scripts, are you kinda like, no more villain scripts?

Ben: No, absolutely not. To me, it’s a compliment. It’s like playin’ bass in the band, it’s like giving it bottom end or something like that. It’s pretty cool.

Ricky: There’s a scene in this film (RPO) that I really love. You have one line in it and it’s a memory of Halliday’s and you’re handing someone some coffee and you readjust your character. It’s literally a split second to define your character for the majority of the movie.

Ben: Nolan Sorrento back in the day worked at this tech company, kind of like one of the big ones… and he was an intern but he wants to basically suck up to the boss. He’s basically ignored because he’s a bit of a dick. My jumping off point for him is more that he is a guy with a bruised ego who can maneuver very well, that can talk the talk. But he is someone that I think fundamentally will see something and get completely the wrong notion from it.

Ricky: When you go into a scene like that though, which is essentially a split second in the movie to define your character’s backstory… Do you look at it that way or do you try not to think of it as a big moment in the movie?

Ben: I just think of them all like propositions. I don’t get too attached or too like… it’s all on me now. I like to just get out there, let’s just watch the waves roll in and jump in and try and surf.

Ricky takes audience question: What do you think it is about this one (RPO) that resonates with audiences?

Ben: Two words, Steven Spielberg. I haven’t seen him make a film like this ever. I think that the book, Ernest’s [Cline] book, it really hit a chord with people. I mean it’s talking about society going to shit, everyone spending time in their funky little world, it’s also got a lot of really super cool… I mean if you wanna ‘geek out’… man, you can eat your Cheerios full of pop culture references. There’s a plethora of pop culture references. He’s [Spielberg] just so on song with this and he’s done stuff that he’s never had to do. He says this himself, this is the hardest film he ever had to make. This is the film he had to dig the deepest with the technology and everything else around. He’s cooked up his masterpiece.

Ricky takes audience question: When you’re getting offers to do films, at what point in reading the script or talking to the director do you decide, I’m gonna do this movie?

Check out the full interview below for the more in-depth conversation with Mr. Mendelsohn. From other hit movie roles in Animal Kingdom and The Darkest Hour to his love of hip-hop music and Robert De Niro, Ben Mendelsohn covers it all.

Ready Player One hits theaters March 29th! Are you ready to revel in the retro? 😉