We caught up with the one and only Andrew Lincoln at Walker Stalker London, who was in town shooting scenes for the much anticipated short sequel to Love Actually-and according to some photos released today, his character is back at it those iconic questions cards. We interrupted his romantic mindset to talk Walking Dead-of course! 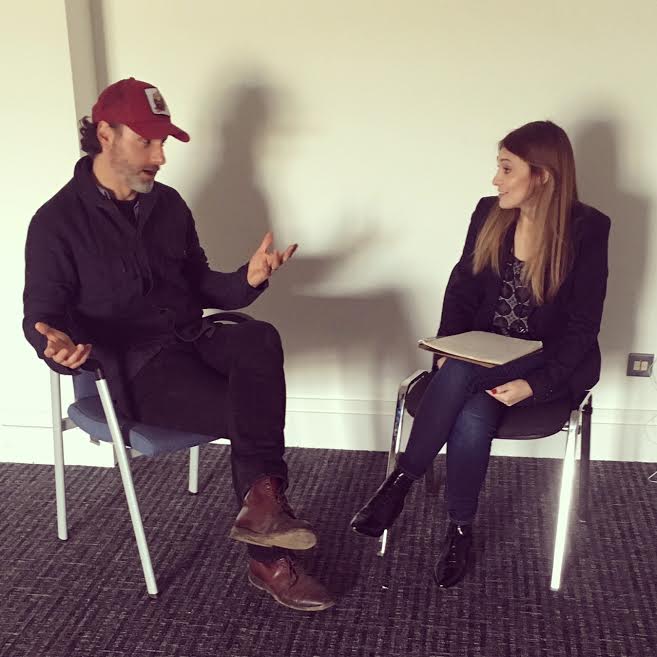 Shannon: As different as they are, there are these tiny similarities between Rick and Negan that we are starting to see, they’ve both lost people they love, they’ve both made incredible sacrifices to get where they are. Do you think that they know this about each other?

Andy: I’m not sure about me, I think i’m still reeling from just the fact that the world has been turned upside down by this guy. I dont think I’m in the place I was with The Governer yet which was where there was a sort of shared understanding of leadership and what that entails. A common bond of leadership. I think all the leaders of the communities who know that they’ve had to struggle and strain and make compromises to even get this far. So I think there were similarities probably with Ezekiel, and all the other leaders that they could probably recognize. But certainly there’s something in Negan, because he toys with him.

Scott Gimple said a very interesting thing. The thing he enjoyed from the comic book is that Negan almost wants Rick to be his best friend. But it’s an interesting dynamic, whether or not that plays out is a whole other thing because Rick could never do that or give that to him. It’s childlike. Possibly when the dust settles. They all had to do awful things.

His is not a totalitarian system that he believes in. His is much more a democratic idea of civilization, but they are both figure heads, both formidable on compromising, they are both good at compromising. Tenacious. Relentless.

Shannon:  What would you do if one of your children did what Carl did and tried to take on Negan solo?

Andy: Parenting is hard anyway, but try doing it with people like Negan in the neighborhood. Rick shows an incredible amount of restraint. It shows where he is initially. He’s not able to chastise the boy or reach him. Because he’s still broken because he hasn’t been lifted up yet by Michonne. He’s the big bad wolf and you don’t want your kids going anywhere near the big bad wolf.

Shannon:  How is it to have Rick finally able to smile in those moments with Michonne?

Andy: It’s weird, so much of the show has been fight and survival. To explore that part of him is really exciting and also particularly with Danai who is such a fine actress. These two characters sort of unlock parts of each other that no one else has seen and to be able to play around with that is fun.
It’s part of the story I love. I’m really excited about it, the domestic, subtle, beautiful nuanced parts of their relationship.

Shannon:  Ideally for you, how does The Walking Dead end?

Andy: Out of respect to the fans and everybody myself, I want to have stock in this extraordinary story, but how do you do that in a comic book and a show that never ends? That’s what’s exciting and formidable about the show is that I would love to see Rick grow old and look like Mount Rushmore, but I have a feeling that’s not gonna be the case. We’ve built such an extrordinary fan based on a story that is painful. Beautiful but painful-which is life. I like to think that we’re going to continue to do that.

What that means is that at sme point ricks gonna have to fall probably.But the short answer is, I don’t know. Ask Scott Gimple.

Andy: You know when you have a chair, and a footstool? I’d like him to be my footstool.

Shannon:  What can we expect from the rest of season 7?

Andy: The rest of the episodes very much move towards a point of conflict, there are lots of missing strands that need to be pulled together and you will quickly discover what happens with certain characters and communities. But we are quickly moving towards a point in which everybody knows as the “All Out War” in the comic books and which we are very excited about. We are not going to scrimp on our duties.

When we shot the last episode of the season, people couldn’t wait to get the next script. There was more energy and excitement about what happens next than ever before.

I strained my voice doing ADR on episode 16-thats a good indicator! So you can get the idea of what it’s gonna be!