Today is the day. In a few short hours, the 44th will become the 45th.

8 short years ago, we swore Barack Obama in as president, and now he is officially saying goodbye to the White House.And while he is moving on, let’s reflect on some of our favorite moments.

As president, he has gotten to travel all over the world and meet lots of people. One of them being Queen Elizabeth II in Buckingham Palace. Another was her grandson Prince William. While Obama was visiting Kensington Palace, he also met Kate and Prince George.

But he always made sure to stay connected with the people and community. In this photo, Obama and Biden slid over the counter to take pictures and talk to the workers at the Shake Shack in 2014. Pete Souza, the White House photographer, said that Obama usually does these types of things when he stops to get lunch.

While he is connecting with the present, he also tries to connect with the past. Here he and Michelle are visiting an old slave house on Senegal’s Gorgee Island. He said that trip motivated him, as an Africian American President, to push even harder for the defense of human rights. 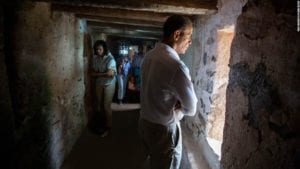 And he has a fun side. Back around Halloween 2012, Obama was playing with the son of a White House aide, pretending to get caught in Spiderman’s web. Pete Souza should be proud of this photo as Obama said it was his favorite of the year.

And three years later on Halloween, he holds the daughter of the National Security Adviser. She went as a teeny tiny elephant.

To top it all off, he is a loving husband and a wonderful father.  Here is a portrait from last Easter of the Obama’s, including Sunny and Bo, their two Portuguese Water dogs.

And today, in the final hours of his presidency, Barack Obama took to Twitter to express his gratitude.

It's been the honor of my life to serve you. You made me a better leader and a better man.

And it has been an honor looking back at your triumphs, Mr. President. You will be missed, but never forgotten. Because, yes, we can.

If you want to stay connected with Obama after his presidency and get updates on what he’s working on, sign up at the Obama Foundation website. It has photos, information on the Obama family, current and future projects, and a place for you to lend your voice.

What are your favorite POTUS moments?