The entire mission to go track down a White Walker to prove to Cersei they are a real threat was probably one of the least thought out ideas our characters have ever had. However, since this is Game of Thrones the whole thing was perfectly executed, full of tension and heartbreak, and extremely well done.

Now, if you’re like me you’re still trying to move past the fact that Viserion was killed and then brought back by the Night King. Not all of us have a handsome (and shirtless) Jon Snow to distract us like Dany, so the utter sadness is still lingering around this morning.

Thankfully, we have Twitter to make things better for us all the night after a devastating Game of Thrones episode. So, while you were on the edge of your seat nearly covering your eyes during Jon Snow and Crew’s intense White Walker battle, Twitter user @CagalaBen was busy noticing a rogue redshirt having a nice little air fight in the background.

Clearly, no one was meant to be looking at him, but I for one, am so glad that this video exists. The CGI work on Game of Thrones is absolutely incredible, but it’s always funny to see these little missed moments that show you just what filming a scene like that entails. 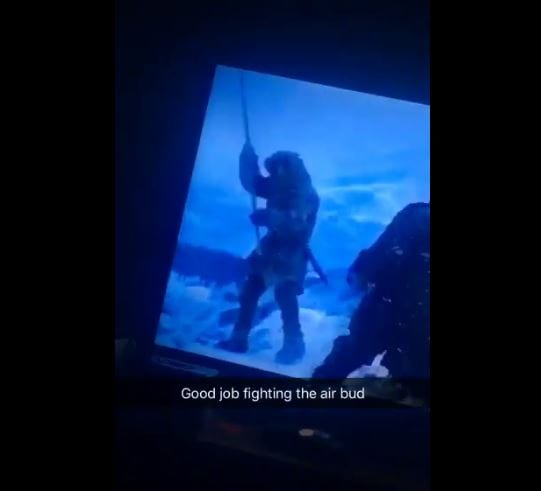