Growing up as the daughter of a teacher/librarian and engineer, it was no surprise when I grew up with a sense of fantasy and adventure. Well, especially given the fact that I could spend countless hours after school in the library while I waited for my mother to finish her day. Finding myself immersed in world full of dragons, wizards, and magical journeys served as such an amazing and sweet escape for me. Even still as an adult, I have a taste for a super sweet adventure. That being said, it is a trait that I am more than happy to pass down to my nieces and nephews.

Recently a fantasy project that has caught my eye, is the ‘Ian’s Realm’ Saga. ‘Ian’s Realm’ is an adventure fantasy saga that follows an unsuspecting teenager as he enters a portal to another world, and is thrust into conflict with dragon worshipers – an epic battle between good and evil. This inspiring and magical tale is actually adapted from the award winning novels written by D.L. Gardner. She is the winner of Book Excellence Award, Best Urban fantasy at Imaginarium Convention, and a host of screenings and trophies for her historical fiction screenplay Cassandra’s Castle.

Currently, she is working to bring ‘Ian’s Realm’ to life as a concept short, which will be entered into film festivals and therefore hopefully leading to the magical world obtaining its own television series.

The official synopsis for the Saga reads:

When an unsuspecting teenager from Seattle and his father discover that they tapped into a portal to another world on their computer, the two venture in. A pristine countryside lures them further away from the portal but calamity strikes while exploring an eerie mountain. Their horses are stolen, and Ian’s father vanishes. At the same time, Ian is attacked, taken to a small village by the sea, and made a slave by dragon worshipers. His desire to escape the cult escalates when he realizes his father is lost in the dragon’s lair. But a young boy wielding a magic dagger, and a fiery dragon prohibit him from fleeing.

All I can say is, I am absolutely in. I love a good fantasy tale with a perfectly balanced sense of wonder. Just from looking at some of the set photos alone, it reminds me of the perfect fantasy world. I love stories with a little humor, a touch of romance and some storming adventures. Oh, and magic and dragons? How could I say no to that?

The Renaissance Faire in Pennsylvania has become like a second home to me, and looking at photos of this set remind are just pure magic. It’s like I’ve actually stepped into that world. 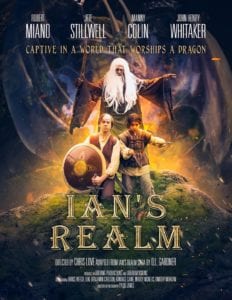 Be sure to check out more information on this wonderful project on Seed and Spark.

The team is currently running a campaign to bring this project to life, and the rewards are absolutely breathtaking. You can also check out D.L Gardner’s wonderful works on her author page.

When I asked Dianne about what her inspiration was behind the story:

“My grandsons. Not only did I want to create a story they would enjoy, but because they were raised without fathers, I wanted them to see that they could be the man they wanted their fathers to be regardless of their heartbreak of not having a role model. That’s a journey that Ian must take,”

Speaking as a writer myself, I know how much it means to have your dreams come true. So please take a few minutes to read about this amazing story – you will not regret it!