*Spoilers Alert: Seriously, ALL the Spoilers. So if you haven’t seen the film yet, check out our Spoiler Free Review and watch the film*

When the Power Rangers (2017) movie was first announced, people were wary. For many of us, the original series was sacred and the last thing we needed was our childhoods ruined with another lackluster “for the heck of it” reboot. Well after seeing the Power Rangers (2017) movie last week in theaters, all of our past fears were laid to rest as we not only felt like kids again, but also got an exciting new look at some of our favorite heroes and heroines.

Power Rangers (2017) is truly everything a Reboot should be and more! So let’s take a Closer Look at all the ways this film not only honored, but also improved upon that original series.

Expanded Back Story & Mythos – Rita, Zordon & Why Angel Grove Is Always Getting Attacked:

‘After 10,000 Years she’s free!’ Well not anymore. The new Power Rangers film didn’t just add a couple million years to Rita’s sentence, but also a ton of back-story that makes both her and everyone she’s connected with more compelling. Rita’s not just some evil witch imprisoned on the moon, but rather a former ranger. As we see by the end of this film, a Ranger can only be connected to the morphing grid when he or she is connected with and feeling for his/her team. They’re a family, and that is the bond Rita broke when she was seduced by the lure of more power.

You can see this in how Rita and Zordan talk about/ refer to each other. Zordon for most of the movie is fueled with an almost blinding hatred for Rita. He wants the Rangers to morph so he can take her down. This is very personal for him and is something far more complex than we got from the original series. Similarly, we see Rita react with such hatred not only towards the new group of Rangers but also at the mention of Zordon’s name. This is a Rita equally fueled by hate and trying to prove a point. And even though she ends the film with her plans crushed before the might of the (arguably first) Megazord, she refuses to have Zordon (her former partner/ teammate) even attempt to judge her.

Though these complex and emotional motivations weren’t the only things to get a much-needed explanation in the film. Take Angel Grove, a city that for YEARS was always the subject of an evil empire’s attack. After a few seasons you’d think Rita and Lord Zedd would try to take over Paris or something. Well this film finally addressed WHY Angel Grove was and will continue to be the center of attention for this film franchise: The Zeo Crystal. It was certainly a reimagining of the original Zeo Crystal lore, but this again gives it so much more meaning. Here the Zeo Crystal is the spark of life and arguably even had an effect on the Zords, but I’ll discuss that more in one of the following Sections.

Character Depth – Making Us Feel For The Characters:

We remember the Power Rangers as a team of “teenagers with attitude” – even though Zordon originally asked for “overemotional and overbearing humans” – but did the original team actually have attitude? The usual connotation for “attitude” is being uncooperative and antagonistic; and whereas there were occasional run-ins with detention, Jason and the gang were pretty well-mannered and rarely ended up on anyone’s bad side. In fact, the every day Rangers didn’t deal with problems too different from Saved By The Bell/ Boy Meets World, which is probably why we paid more attention to the fights.

The same cannot be said about this new group as three of them are already in detention and one doesn’t really go to school at all. Each ranger certainly has his or her own unique ‘attitude’ problem that goes far beyond any of his or her predecessors. Though it’s these defined attitudes that make these heroes not only stand out from each other, but also from most other role models of this age range. 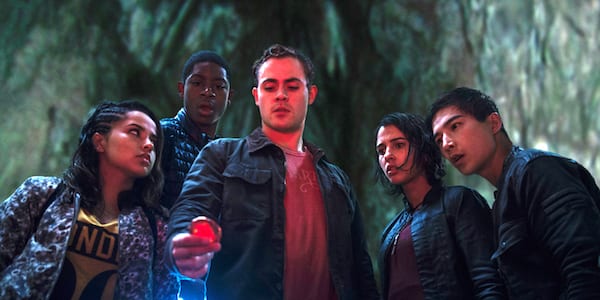 Jason is the fallen sports star with rash tendencies, but his loyalty knows no limit. Kimberly is a bit of a ‘Mean Girl’, but she has a tremendous heart and wants to make up for her actions. Billy blows things up occasionally, but overcomes his Autism as not only a brilliant creator but also someone who gives their life for his friends. Zak is thrill seeker who lives life too close to the edge, but only does so because he struggles with the though of losing his mom. Trini is struggling with her sexuality and feeling like she doesn’t fit in, but never for a second though about saving herself even when facing down Rita alone. In this way, Trini is directly juxtaposed to Rita and shown to be her superior.

In the end, each Ranger is an outsider in some way and has an issue you would likely NEVER see on a teen show nowadays – and I’m not sure if that says something great about the film or something bad about the rest. This is a Ranger team that tackles real world problems in addition to out-of-this-world problems. Life has gotten much more complex since the early 90s and these new heroes are perfectly suited to give everyone the power to move forward. Whether it’s dealing with loss, being conscious of how your actions affect others, understanding the viewpoint of someone on the autism spectrum or feeling comfortable with being LGBT, this series builds upon the long tradition of offering people of all ages a role model.

One great distinction in this film is how these rangers weren’t randomly selected by Zordon or Alpha, but rather by fate. It adds a huge level of realism to the film in that you sometimes have to deal with what you’re given and this is most shown in the training sequences. Unlike the original series, where the Rangers simply had to say “_____” and gain the knowledge of how to fight and control their Zords, these Rangers do not. They have to train… a lot! And they still fall short occassionally, but that makes it so much more rewarding when they actually do succeed. Even the fact that the Ranger’s had to figure out their zords was a much more realistic take.

Speaking of the Zords, originally we were worried about these new designs but after seeing the film they make perfect sense – and none show this better than the Spider-like Mastodon Zord. This was by far the most troubling zord recreation. Why so many legs? It looks like a spider! Well after seeing it move in the film we see that despite having multiple legs, it actually moves like a bipedal animal and the additional legs simply allow it to carry its tremendous weight. We’ll always love the original Mastodon, but unlike that lumbering giant this is a much more agile and battle ready Zord.

A final point to bring up is the creation of the Megazord, something that was never mentioned by Zordon and was certainly not expected by Rita. All the signs seem to point to this being something completely new and unexpected in this universe. Was this transformation a result of the bond of this new Rangers team or was it powered by over exposure to the Zeo Crystal? Considering the transformation happened after all the Zords got pushed into the Zeo Crystal pit and refused to let go of each other, it seems like both are to thank.

A Great Love & Respect For The Past:

There’s been times in the past where someone tries to reboot/ interpret a series in a “new” way and it ends horribly. There’s plenty of reasons this can happen, but it ultimately comes down to how much you feel they love the original. For example, Deadpool lived up to every fan’s dream because you could see how much everyone who worked on it loved the character Deadpool and wanted to honor that legacy. The same can be seen in Power Rangers (2017) because even if certain characters and situations have changed, there is so much attention to honoring the past you can’t help but enjoy the new adventure. From Easter Eggs like telling the Rangers to aim for the “center mass” of Rita’s henchmen – a technique for dealing with Lord Zedd’s stronger putties – to the time and effort they put into each character’s back-story and development, you can see this wasn’t just another project for the filmmakers but something they wanted to hit the mark on. 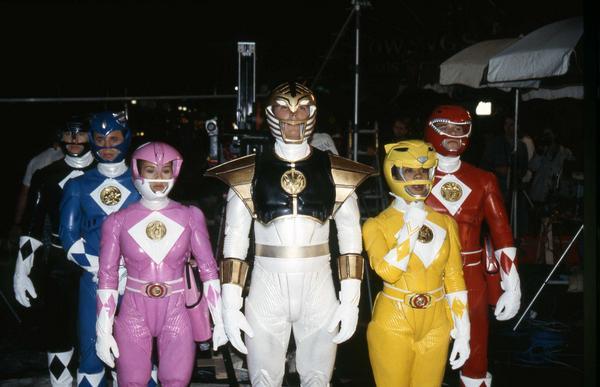 In fact, Power Rangers (2017) actually made a long time film dream cone true – visor-less Rangers. Back when Mighty Morphin Power Rangers: The Movie was being filmed, they originally did scenes without the helmet visors to add more feeling and emotions to the scene. Looking back at some of the stills, it looks like a hilariously bad and awkward idea. The idea was then scrapped because they realized the Rangers were supposed to be emotionless forces of good in battle. Though this film showed both side as they fought fully armored in ground combat and revealed their faces in zord mode – and it was a wonderful choice! Maybe it’s the more organic helmet design or something else, but this stylistic choice adds a ton of emotion to an otherwise detached Giant Robot Battle.

Once again, we have another instance of seeing the Rangers struggle and we the audience “feel” right alongside them. From big things to little things, this film was able to give a wink not only to those who know the tiniest details about the Power Rangers, but also to those who have worked on the franchise with Saban since the start! Thanks to these updates, throwbacks, stylistic changes and incredibly well-represented cast, Power Rangers (2017) is by far the greatest Reboot I’ve ever seen! And (again) in terms of a representative and diverse cast, the Power Rangers Movie does in 1 film and 1 town what Marvel has yet to do in 14 films and an entire universe.