This week, we saw the premier of the latest CW Superhero show, Black Lightning. Now while it certainly shares some telltale characteristics with the Arrowverse (ie: gritty approach to crime like early Arrow, emphasis on family like early The Flash, etc), it is very much its own beat. For starters, this isn’t a young man in his prime rising to fight crime, but rather a retired hero and father who’s getting back into the game almost 10 years later. This is a man who doesn’t have to wonder about love and heroism like Oliver and Barry do. He already knows full well how that story goes! But do WE know where this story fits – if at all – into the existing Arrowverse?

The easy answer to how Black Lightning will eventually connect to the Arrowverse is of course multiverse. Supergirl (Earth – 38) joined Arrow, The Flash and Legends on Earth – Prime. So similarly, Black Lightning could happen on a different Earth and will most likely be discovered via Cisco’s breaching powers. Though one important line of dialogue halfway through this week’s episode shows us that regardless of which Earth he’s on, Black Lightning is not the only metahuman. 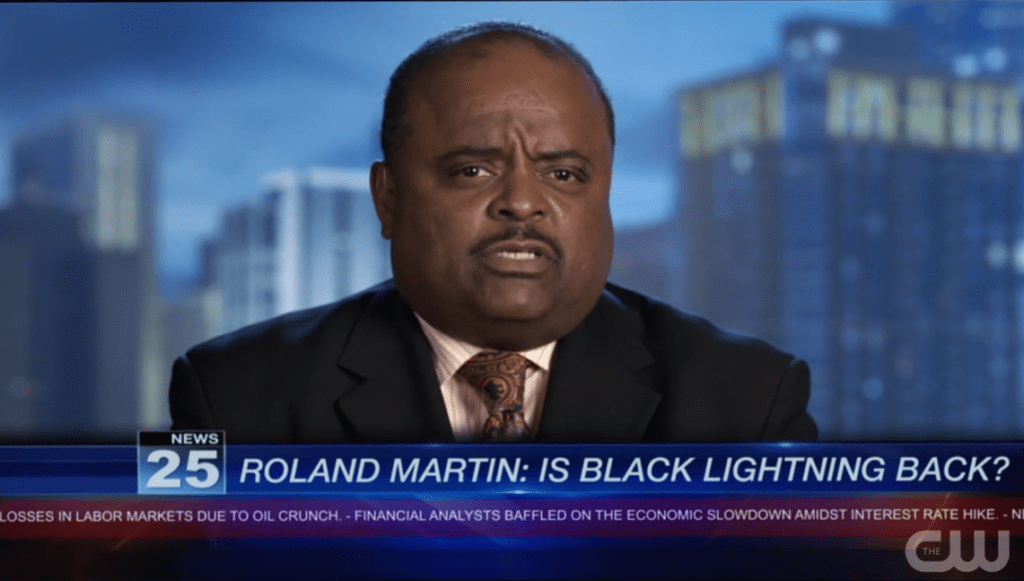 After Black Lightning’s appearance at the 100 Club, a man on TV asks why Black Lightning is labeled as a “vigilante” while people with super powers in other communities are labeled as “heroes”. Considering I wrote an article about this vigilante vs hero concept barely a week ago in regards to Arrow, this idea was already very fresh in my mind. I began to wonder if one of the ‘other communities’ references was actually Central City and the Flash. So even if the Different Earth Theory is the safer option, let’s just imagine for a second that Black Lightning DOES take place on Earth-Prime. How could that work?

Well the answer to that has a lot to do with one of this show’s main premises: the time skip. Again, this isn’t Jefferson Pierce’s first time being Black Lightning. He started this crusade a long time ago and is just now coming back 9 years later. So what if the current Arrowverse is actually Jefferson’s past? It’s crazy, but this wouldn’t be the first time the Arrowverse played with time; and the premier already gave us some supporting evidence!

Again, thanks to that news report, we know that Metahumans and heroes are already an established part of society. Additionally, the fact that Jefferson’s daughter Anissa is already showing signs of her own (yet related) powers shows that she would hypothetically be our first second-generation metahuman. This all places Black Lightning some years after The Flash/ Arrow as metahumans are indeed becoming more widely known, but no second generation metas have been born yet. And again, since Black Lightning’s first appearance was years ago, that places this after the emergence of metas. 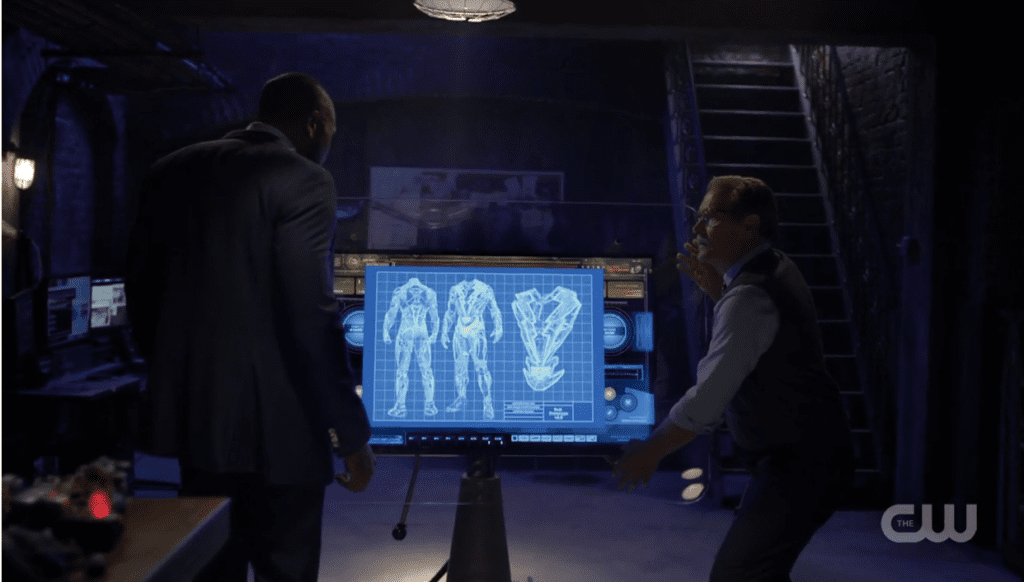 As much as I enjoyed this premier, there is one moment that made me chuckle – and not in the good way. I’m of course talking about when Peter Gambi takes Jefferson into the secret basement of his shoe shop. HOW can a “tailor” afford such gadgets? Sure, this could hint at some mob connections, etc though it’s not just the ‘out of placeness’ of these gadgets, but also how high tech they are. His monitor looks far more advanced than anything in the Arrowcave and the suit he made for Black Lightning (in a basement) is far more high tech than even Star Labs could produce. So HOW?!?!?!?!

Well again, a time skip would make this possible. A jump of 10 years wouldnt be enough for ‘flying cars’ and the usual future stuff one thinks of; BUT it would be enough to make high tech gear more accessible and streamline. Perhaps that mixed with some deep pockets explains this scene. Additionally, when you look back at Black Lightning’s original suit from 9+ years ago, it looks like it’d fit in better with the early style of dress on Arrow/ The Flash. Could THAT be the suit we eventually see Black Lightning appear in? Then again, Gambi’s schematics of the current Black Lightning suit says V2.5, so perhaps the suit in the security footage was the proto-prototype. 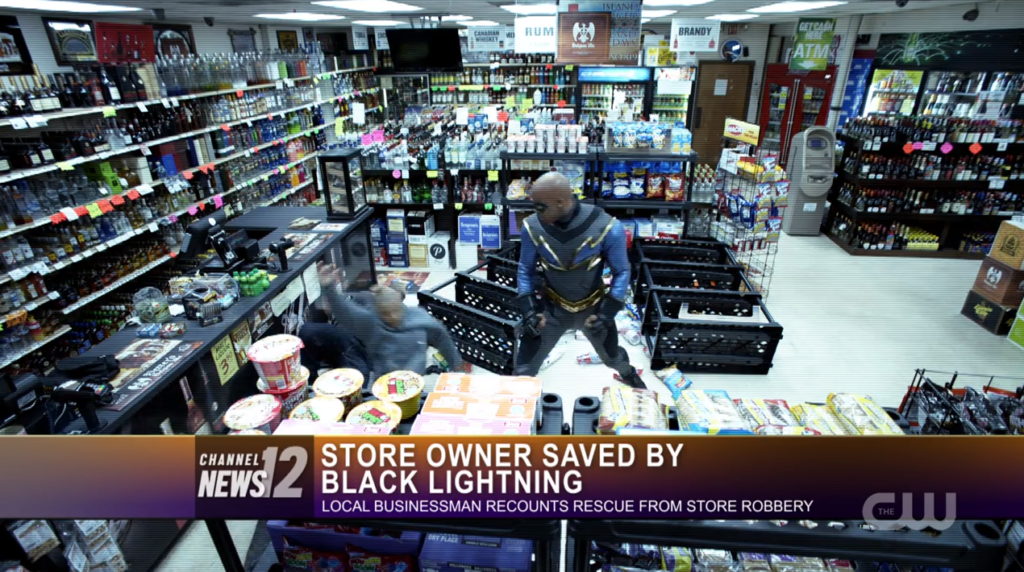 Now this is where the theory either loses traction OR gains further support, and that’s confusion is due to the odd continuity in the Arrowverse when it comes to Presidents. Currently in the Arrowverse, the president is Susan Brayden, who took over after the previous president was killed by the Dominators in November 2016. Beyond that though, it’s unclear how things progressed in terms of tenure and predecessors. Was Brayden’s unnamed predecessor just starting his first term, or well into his second? I bring this all up because in one scene we hear a man recount how Black Lightning saving his life allowed him to live long enough to see the first Black President.

In recent continuity, there has yet to be a Black President in the Arrowverse. So could this be something coming up, perhaps elected after Susan Brayden? Well, again, the FULL Arrowverse continuity makes things difficult. There’s been moments in Arrow where they’ve referenced or shown a photo of President Barack Obama. He even appears in some mini comics for the Arrowverse. So was Obama the president before Brayden’s unnamed predecessor? Again, it’s hard to tell since we don’t know term limits; but Obama’s second term was going on IRL when he was mentioned around Season 2.5 & 3. These are minor distinctions; but returning to that man’s flashbacks, it means that Black Lightning originally operated at a time BEFORE there was a Black President. If the Arrowverse already had a Black President, then Black Lightning’s “past” is not the Arrowverse’s “present”.

Overall, timelines are tough and I’m sure we’ll see this hero eventually crossover with the existing Arrowverse. After all, he did appear with everyone in that ‘Suit Up’ trailer. Though to be honest, I’m more excited to see Black Lightning’s story be flushed out in its own right. And from the sounds of it, that’s Showrunner Salim Akil’s feelings as well. We can always have him appear in the Arrowverse; but for now, let’s define this hero by him, his family and his deeds – not by his relationship to other heroes. And for those saying, “where’s our origin story?”, just wait! Black Lightning has already shown that it will use the occasional flashback to elaborate and explain things; and I’m sure there’s loads more where that came from! And that is why for better or worse, united or divided, I am happy to add Black Lightning to my weekly watch/ analyze list!