Unlike Game of Thrones, House of the Dragon is based on a completed novel, albeit a very different kind of book than the main series. This implies that fans have access to a wealth off information regarding the plot, including the fates of many major characters. Read on to learn how things panned out for the king in Fire & Blood, the book upon which House of the Dragon is based.

Spoilers for Fire & Blood and possibly House of the Dragon ahead!

Fire & Blood is a history book about Westeros, but it’s important to take note that it was written by an in-world scholar based on other unreliable, in-world sources. Therefore, not all details given can be trusted as 100% accurate. However, we can make assumptions about certain characters— like King Viserys Targaryen I. He’s played by Paddy Considine on TV, but keep in mind that he may differ slightly from his literary counterpart due to creative liberty taken with the show. Nonetheless, it seems safe to assume that the broad strokes of his arc will stay true to its roots.

Martin describes Viserys as a timid king in the books, who is afraid of making enemies or offending anyone at court. His main goal was always to maintain the peace and prosperity forged by his predecessor King Jaehaerys I Targaryen. However, this made him indecisive at some crucial moments. Martin illustrates this anxiety by describing how Viserys often gets cut by the Iron Throne itself, leaving him with constant wounds that sometimes become infected.

Viserys has faced several challenges since the death of his wife, Aemma Arryn. To ensure a secure line of succession, he names Rhaenyra (Milly Alcock) as his official heir. However, other lords continue to pressure him into taking another wife and producing more children. While this is ostensibly for security reasons, it’s really just an opportunity for the nobility to gain political power through royal marriage alliances. 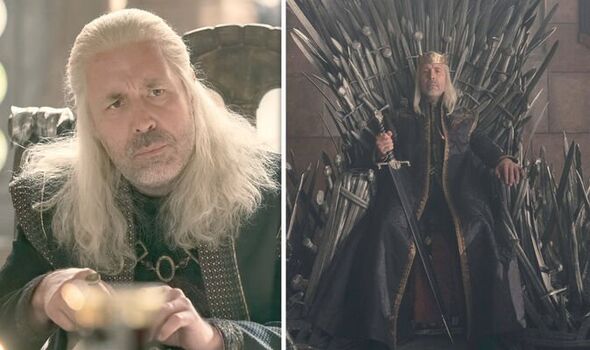 Viserys ends up marrying Alicent Hightower and having four more children with her. However, Viserys still believes that Rhaenyra is his rightful heir regardless of sons he has had since then. Some lords of Westeros disagree with him – not just because they are misogynists but also because they want a ruler who is tied to their house or easier to manipulate. Nevertheless, Viselys never addresses this sentiment against him that gradually builds among the people in his realm..

As Viserys’ days wound down, he also failed to notice the quiet battle for political control between his wife Alicent and heir Rhaenyra. The pair fought fiercely over court allies in an attempt to appoint their own supporters into various positions. This struggle came to a head when Viserys accidentally sliced open his hand on the Iron Throne while reaching for something. Rhaenyra took this opportunity to assert her power by demanding that her loyal maester, Maester Gerardys, be the one who treated him instead of the maester preferred by Alicent .

Even though it never heals, the wound sadly continues to fest when Viserys finally passes away at King’s Landing. Rhaenyra is across the bay at Dragonstone during this time.
Alicent and her allies take advantage of the fact that she is confined there for the same reason she is due to give birth at any time.

The Seanchan keep the king’s death a secret for a full week, during which his remains decompose. They gather their strength and round up any of Rhaenyra’s remaining supporters as prisoners in order to conceal the king’s death. The death of the king is finally announced, and Alicent’s son Aegon II Targaryen is proclaimed the new King of Westeros, disregarding all previous agreements to acknowledge Rhaenyra. This event marks the beginning of the civil war known as “the dance of the dragons.”

We can only guess, but based on how things have gone thus far, House of the Dragon Season 1 will most likely conclude with Viserys’ death. Showrunner Ryan Condal has stated that he expects this narrative to continue for at least three or four seasons, so we’ll need two or three more years to see how it all ended. The end of the war is difficult to pin down as well, so we may require further time after the smoke has cleared.

House of the Dragon has got fans talking, regardless of how the events unfolded. Let’s just hope that spoilers don’t ruin it for everyone like what happened with Game of Thrones’ Red Wedding scene. You can catch House of the Dragon every Sunday at 9 p.m. ET on HBO or HBO Max, and get your hands on Martin’s books in print, digital or audiobook formats now.

Home » News » ‘House Of The Dragon’ : How King Viserys I Targaryen Dies In The Book ‘Fire & Blood’