HBO’s House of the Dragon is based on the book Fire & Blood by George R.R. Martin, and while fans who have read the book know the general order of events that are still to come, there are plenty of gaps in the story that the series can attempt to fill in. One such mystery involves the cursed castle of Harrenhal. Fire & Blood details a devastating fire at Harrenhal, but doesn’t ever confirm its cause. Sunday night’s episode of House of the Dragon solved this mystery for fans, revealing exactly what happened during  and after the night of the fire.

WARNING: The following article contains MAJOR SPOILERS for the most recent episode of House of the Dragon! Continue reading at your own risk…

The castle of Harrenhal has been associated with a curse for many years, due to all of the tragic events that have occurred there. One such event was a fire which killed Lyonel and Harwin Strong. The cause of this fire was never officially revealed in the books, but fans had their theories. These theories were finally put to rest when the new episode of House of the Dragon confirmed that Larys Strong, son to Lyonel and brother or Harwin, actually started the fire. 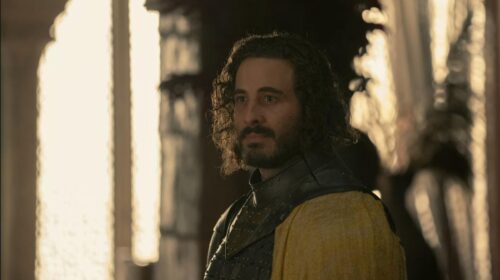 The book and House of the Dragon allude to Rhaenyra’s children being fathered by Harwin Strong, not Laenor Velaryon. Viserys largely refuses to address this issue, but Alicent opts to take action. Thus, she tells Larys Strong about the problem. He then decides that he will take control of the situation himself rather than just leaving it be.

Larys approaches a group of condemned prisoners in the final minutes of the program. He informs them of a deal that will earn them their freedom if they do him a favor and have their tongues cut out. Those same individuals, along with others, show up at Harrenhal in the episode’s closing moments, setting fire to Harwin and Lyonel.

This solves multiple problems at once for Alicent, even though she makes it clear that she didn’t ask for the fire to happen. This takes Harwen out of the equation, keeping Rhaenyra from being happy while also keeping the family clear of scandal. This also allows someone else to step in as Hand of the King, a position previously held by Lyonel. Viserys would not accept his resignation before his death, but now Alicent can influence the appointment of someone else to fill this role.

Larys is now the only male of House Strong since Harwin’s sons are not considered to be his own. He will get everything that belonged to his father, including Harrenhal.