War is coming to Westeros, and it looks like the Game of Thrones fandom will be divided as well. With House of the Dragon heating up, many fans are starting to pay attention to little details and draw their own conclusions about what they mean. It seems that many people are already choosing sides in the upcoming civil war for succession.

House of the Dragon is set to feature a civil war within House Targaryen, something that shouldn’t come as a surprise to fans. If you’ve been keeping up with the show, then you know that tensions have been building for years now, and we’re finally going to get see this conflict play out onscreen starting in Episode 9. The writers have done an excellent job of showing how things like personal vendettas, misunderstandings, and even small offenses can lead to two groups hating each other – in this case, Princess Rhaenyra’s “Black Council,” versus Queen Alicent’s “Green Council.”

It’s no surprise that fans of both George R.R. Martin’s A Song of Ice and Fire and HBO’s Game of Thrones have gotten invested in one side or the other, as both explore how power corrupts its holder and how the titular struggle for power often makes villains out of its most noble players. From a bird’s eye view, House of the Dragon has done the same, but on social media fans have begun to argue over which ethics are more correct, seeking an answer that may not be forthcoming.

Some “green supporters” or “black supporters” on social media sites are role-players who enjoy the in-world debates. However, their intense conversations have fooled some readers and led them to believe that one monarch is better than the other. With a few more seasons of war left, it’s likely that fans will get more invested in whichever Westerosi ruler they choose.

On Sunday, Oct. 23 at 9 p.m. ET, House of the Dragon Season 1 will come to an end on HBO and HBO Max. In light of this event, here is a look at how people are designating themselves as either “greens” or “blacks” online. 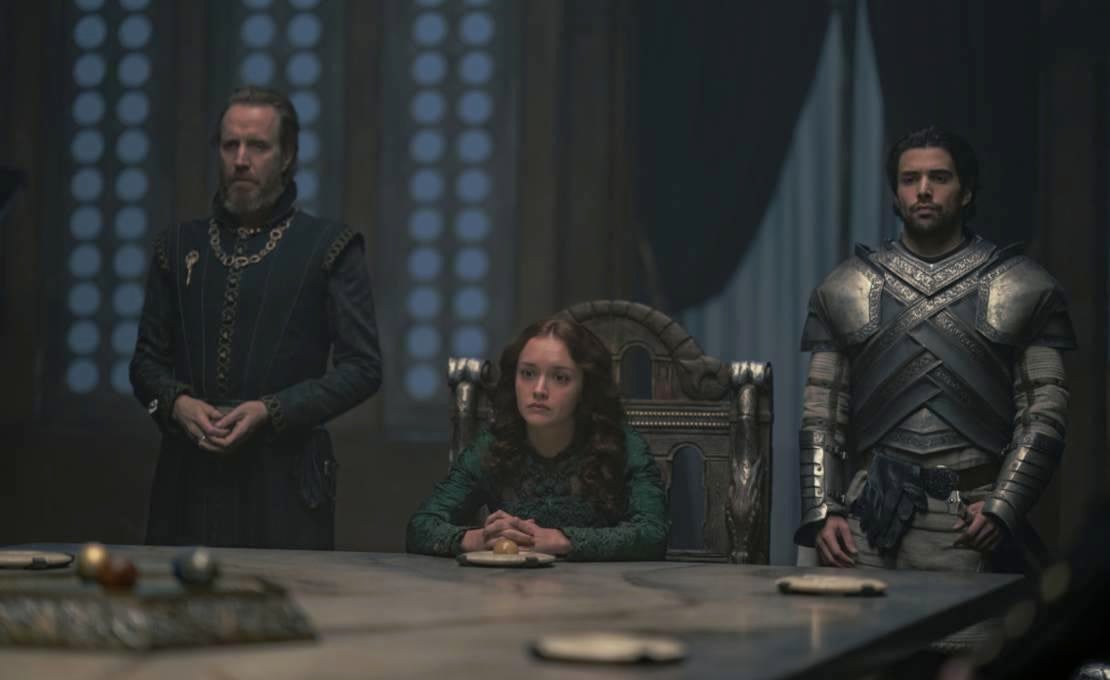 After episode 8, fans argued about whether Alicent or Rhaenyra was more entitled to Viserys’ (Paddy Considine) protection. Some said that since Alicent was always there for him, she and her family deserved to rule, while others pointed out that it was actually because of her presence that caused Rhaenyra to distance herself from the family.

If you compared all the pictures of Alicent to one another, it would look like depressed Ben Affleck.

As this show has progressed, the moments of happiness have become increasingly rare, but because of that they are all the more painful when they happen.

Her free-will to abide by the laws only for her husband to not show any appreciation for all that she’s done. That’s more than enough resentment and anger to brew, eventually leading her to spite him and his favorite daughter by seizing the crown for her kids who were neglected.

Some of the fans who read Martin’s book Fire & Blood noted that their affinity for certain characters might be based on nuances that weren’t included in the show’s interpretation of this story. The details in Martin’s “imaginary history book” are intentionally vague, leaving room for fans to make up their own minds about what they like and don’t like. Some viewers are dissatisfied with the show’s interpretation and believe that the story would come together better if it was approached from a different angle.

I am really enjoying Emma’s portrayal of Rhaenyra, so my complaint is only about a writing choice. And I’m not even worried; they can hit this beat another way. The writing has been great up until now. But we have not seen any indication of the big dragon energy that we saw with young R

I want her to be a complex character, not just a victim. If you strip away certain qualities and make her plain, it makes her boring and one-dimensional.

Many readers are drawn to Martin’s writing because none of the characters are completely good or evil. Instead, they fall into a gray area morally. With this show, some fans felt that it was beginning to miss that element and instead showed a war where one side is entirely right while the other is wrong.

This is exactly what I tried to warn some people about, but it seems like everyone is just a fan now and there’s no room to discuss these characters or their motivations with any sort of nuance.

I did too. I think I broke my block button

Some viewers thought that the fans of the show were creating a moral divide within fanbase, and discussed this issue on social media. Others joined in these debates, but some feared that it would lead to them enjoying the show less.

Rhaenys would make a great queen and absolutely deserves it!

Many viewers argued that there were better candidates for absolute power than either Rhaenyra or Aegon.

It’s funny that even in “the blacks, the greens and the reds”, where Aegon is shown more sympathetically, Alicent is still considered the real villain. Like wow, that’s not lazy or misoginistic for sure.

Lastly, lots of fans felt that the show didn’t place enough blame on Viserys for starting this war. They were curious if the show would ever make its characters confront Viserys’ willful neglect and ignorance.