While promoting Hocus Pocus 2, Kathy Najimy might want to avoid using exercise equipment. During a pause in filming late last year, the King of the Hill actress fractured her rib while exercising on an inversion table. Mary Sanderson is the protagonist of Hocus Pocus 2, which premiered on Disney+ on September 30th.

“The day I wrapped, I went over to my friend’s house. And I saw that she had one of those machines that you put your legs in and you go upside down and it stretches you because I have one,” Najimy recalled. “And I said, ‘Oh my God, I have one of these in-home.'”

The machine flipped her over, and she immediately rushed to it. However, her foot “didn’t quite make it” and she “fell like an accordion” when it turned her upside down. She fractured a rib and spent the holidays in traction.

“So my whole week off that we were supposed to enjoy the holidays, I was healing, but it’s fine,” she revealed to Vanity Fair.

The pain didn’t stop Kathy Najimy from doing her own stunts during the second half of production. “I love heights, I love to be scared, I love the whole thing. So [with] the flying, I kept saying, ‘More, keep me up. Don’t bring me down. Keep me up.'” she said. “I’ve jumped out of an airplane twice,” With a love for heights and being scared, Najimy continued to ask the crew to keep her up in the air even during lunchtime joking with Sarah Jessica Parker that they should be left ‘flying.’

Finally, after 29 long years, the Hocus Pocus sequel was released. Although Najimy had no issue playing Mary Sanderson again, detail-oriented fans will notice that her crooked mouth is now on the other side of her face. According to Najimy’s interview with Entertainment Weekly, there wasn’t any big story behind this change. 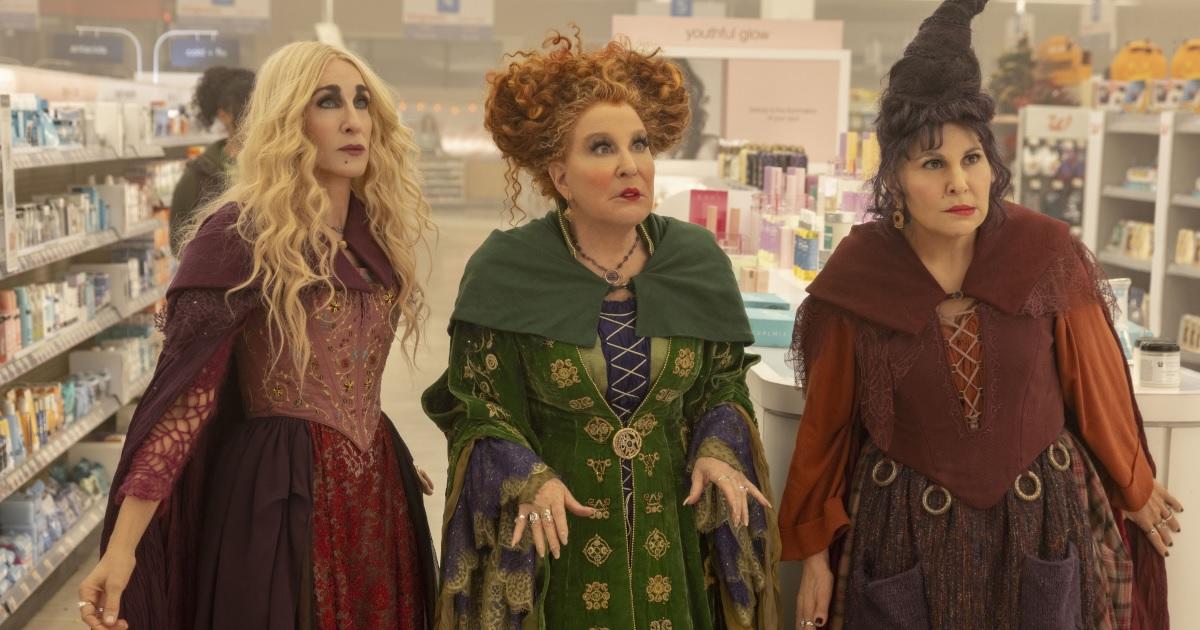 As she told EW, “It’s on the other side mainly because it’s so hard for me to do it on the side I did it on 30 years ago. I’m sure the fans are going to go into deep detail about why it’s on the other side,” she said with a chuckle. “It’s just something I came up with the first week. This is a big comedy, so you don’t have to be subtle or have a 40-page Shakespearean backstory.”

However, the change is explained in a humorous way within the film. “We can justify it because there’s a scene at the beginning where Winnie slaps me, and my mouth goes to the other side, and then she slaps me again and it goes to the other side, and sticks,” she said. Hocus Pocus 2 was directed by Anne Fletcher and features Bette Midler as Winnie Sanderson, Sarah Jessica Parker as Sarah Sanderson, and Sam Richardson, Doug Jones, Whitney Peak, Elissa Escobedo, Tony Hale, and Hannah Waddingham in supporting roles.

Najimy isn’t ruling out the possibility of a third Hocus Pocus movie, telling PEOPLE that “never say never,” is her policy. Though filming was enjoyable, it’s not easy work, she warned. “It was fun, but it’s not nothing. It’s a lot, but who knows? Who knew that almost 30 years later we’d be doing this sequel?” If there were to be another installment released in 30 year’s time Najimy joked that “I think if we did it 30 years later again, well, there would be walkers and canes involved. The flying might just be a little one-foot blip off the ground.”