When did Terry Bradshaw join the cast of Riverdale?

He didn’t actually join Riverdale, but his deer costume on The Masked Singer sure did resemble the Gargoyle King. 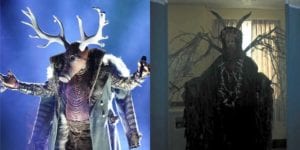 The Hall of Fame quarterback and four-time Super Bowl winner sang Florida Georgia Line’s “Get Your Shine On,” but lost to the Lion. That meant he had to remove his mask.

“It’s been so much fun,” Bradshaw said, adding that “this, by far” was tougher than football.

Fans everywhere saw his resemblance to the Gargoyle King.

The Gargoyle King is the #TheMaskedSinger. Or is it the other way around? #Riverdale pic.twitter.com/bOkcRn8mKc

Tell me this is not looking like that gargoyle king from the Riverdale? #themaskedsinger meets #riverdale⁠ ⁠ pic.twitter.com/Ya15dMzkT7

The Gargoyle King is on the Masked Singer? @CW_Riverdale https://t.co/zzRuebb2S1

Crazy how The Gargoyle King is on #Riverdale AND #TheMaskedSinger right now. pic.twitter.com/gNGUQwauym

What do you think? Is Terry Bradshaw the Gargoyle King?

Home » News » Has the Gargoyle King been Unmasked? An accidental ‘Riverdale’ and ‘The Masked Singer’ Crossover