After an eventful end to last season and a relatively quiet winter, it’s finally here…Opening Day of the Major League Baseball season!

Whether your favorites scored their first wins (or losses) of the season on Sunday or you are waiting for the first pitch to kick start your team’s season today, you might need a little entertainment to keep you from anxiously waiting for these games to start.

Here are a few baseball-related movies (and one television show to catch up on) that offer up different aspects of the sport that brings fans coming back and tuning into every game, from its history to the ability to bring people together.

Angels In the Outfield

The 1994 remake of Angels In the Outfield tells the story of Roger, a foster kid who happens to be the Angels’ biggest fan. Combined with his father’s promise that he’ll come back to get him once the Angels win the World Series, Roger begins seeing actual angels when he goes to games. He soon gets the attention of the Angels team manager, the team, and ultimately everyone.

Angels In the Outfield is one of those fun, heartwarming Disney movies and at the heart of it is something that every baseball fan can relate to, never losing faith in your team despite the record showing otherwise. 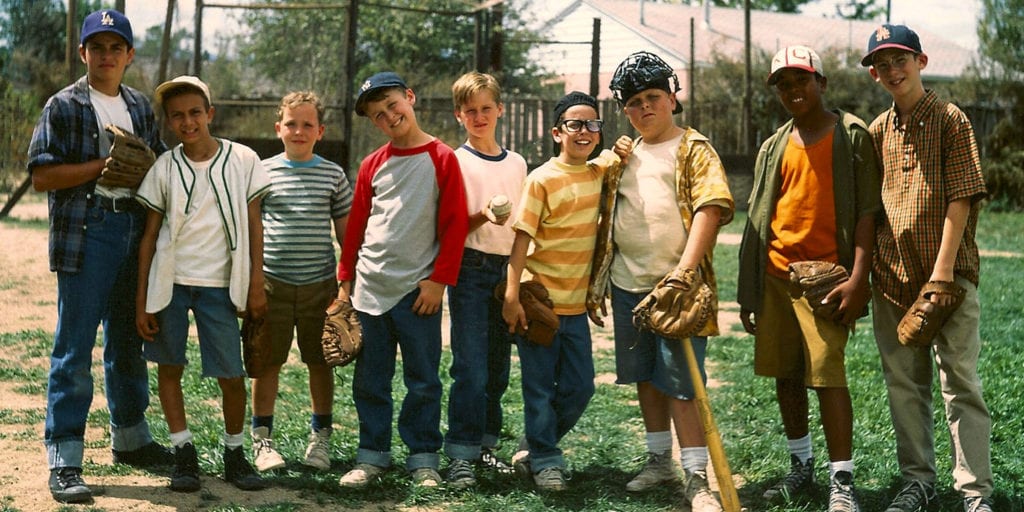 The Sandlot is a classic and looks at a group of neighborhood kids and the adventures they get up to after Scottie Smalls moves into the neighborhood, joins their game of baseball, and he borrows his stepfather’s baseball to play. After they throw it over the fence, they have to face off against the monster beyond the fence and learn it’s not what they think.

It’s one of those fun baseball movies that has the aspect of coming-of-age and just never gets old and has quotes that can be used in everyday life. I mean, how can you say that you’ve never used “you’re killing me, Smalls”? It’s the kind of movie you may have watched as a child, and no doubt have shown to your children, nieces, and nephews.

Rookie of the Year

Rookie of The Year is another classic baseball movie that doesn’t get old. After a freak accident, 12-year-old Henry finds himself with a powerful pitch that gets him from the Little Leagues to signing a contract with the Chicago Cubs. Henry has a tough time until fellow pitcher, Chet Steadman, takes him on as a mentee.

A League of Their Own

The story of the women that took to the baseball field and specifically the Rockford Peaches is fun, heartwarming, and iconic. A League of Their Own gave us a team of female baseball players and a grump of a coach as they played a season where the ladies took the plate. Much like The Sandlot, the movie gives us a few memorable lines including (of course) “there’s no crying in baseball.” Both the cast and the story made it a go-to baseball movie to watch.

And one TV show… Pitch!

If you’re in the mood for watching something shorter between games, then I cannot recommend Pitch enough. With only ten episodes, it tells the story of MLB’s first female pitcher, Ginny Baker, and the first season tells of her first season on the San Diego Padres. (Now would actually be a great time to renew the show, Fox. I’m just saying.)

May you have had a great start to the season and good luck on the road to the World Series! What are some baseball movies you would add to your list?

Law student by day (and night), Brianna spends her time away from books, briefs, and outlines watching TV and writing about it at TwoCentsTV, TheTVAddict, and now here at FanFest. Superheroes and a crime-fighting zombie currently rule her DVR. All other nerdy musings 140 characters or fewer at @WhenWatchingTV