Today, for fans of Norman Reedus, is something like a holiday in which we all celebrate the birth of someone quite bad ass and incredibly sweet all rolled into one charming package. Yep, Norman was born on January 6th and we look forward to his birthday almost as much as we look forward to our own.

From Boondock Saints to The Walking Dead and more emotional films like Sky – Norman has shown his passion and his ability to transform into any role he’s placed in for some time now. He dedicates himself to his craft and, in addition to the job he loves, he gives a lot to his fan base too. It seems that the larger it gets and the busier it becomes, he does nothing but smile and find more of himself to give. With autographs and conversations, videos and selfies, he never leaves a fan without a smile of their own as they leave him.

While we all celebrate Norman’s birthday, we put together six of the many reasons we think he is just the bee’s knees.

He’s super sweet to his fans

We’ve had the pleasure of meeting Norman through conventions and speaking to him, but we’ve also been able to watch him with crowds, to see the dedication he has to the people who support him, and it’s an endearing quality about him. In fact, it’s one of the things about Norman that we admire the most. Norman is one of the most in-demand actors in pop-culture and he’s not jaded. His circumstance would definitely permit it, it would permit him to feel like he’s sitting on top of the world but he prefers sitting back like the rest of us instead. There’s something incredibly special about an actor who stays hours after a convention closes to sign things for fans and brings them pizza. For someone who stops to get coffee and ends up taking 10 selfies with fans, giving them all a memory they’ll keep forever. He’s never too busy for someone who looks up to him.

He uses his ‘platform’ for good

Norman tweets a lot of interesting Instagram posts and some fun commentary but he also uses his social media platform to spread some goodness and help charitable causes. He is currently working with Cannakids to raise money for children in California who benefit from cannabis oil. He also shared the story of a family asking for help as a loved one battles cancer. He recently shared a t-shirt drive from another actress who was aiming to make a difference and those are just a few of the times in the last two months. While it’s incredible to see your favorite celeb interact with their fans on social media, it’s also nice to see them spread some kindness too.

He IS Daryl Dixon

We couldn’t leave this off the list, how cool is Daryl, seriously? From a rough around the edges guy who wanted to be left alone to a man who relies on his ‘family’, we’ve seen Daryl grow and change as The Walking Dead has progressed and he’s one of the favorite characters in the series now. In fact, a lot of people are unsure of what the show would be like without him. He takes no shit, defends the people he loves, lets his guard down when it matters, and he does it all with a killer leather vest, motorcycle, and crossbow. Go to any Walker Stalker convention and you’ll see the impact Daryl has made on The Walking Dead Family. Norman’s acting proves that no one else could have played Daryl. It’s a role meant for him – literally.

We mentioned that he shares causes on social media, but he also does a lot for fans in need and charities that ask him for help. He doesn’t ask for recognition, nor does he do it for the ‘acknowledgment’ that comes along with it; he just does it out of the goodness of his heart. Not long ago, he and Jeffrey Dean Morgan and Andrew Lincoln to spend the day with some incredible kids from the Make a Wish foundation.  One of the family members involved shared on their Facebook page that they’ve never experienced a day quite like that one and that Norman was indescribably kind. He also frequently signs merchandise for giveaways and makes donations as well.

He’s got an awesome friendship with Jeffrey Dean Morgan

Since JDM joined the cast of The Walking Dead, he and Norman have become quite inseparable. From taking their bikes out on the open road to having movie nights, complete with nicknames and selfies in Tweets, the pair are sort of the ultimate dream team. Since their friendship has grown, so have awesome fan stories. Like the woman who was so angry with JDM when she ran into them one day (and neither of them can talk about it without laughing) to the lucky fans who have met the pair and snapped photos at coffee shops. Bubba and Sugar are definitely two of our favorite people, we’re quite thankful for their friendship.

This might be a little bit ‘superficial’ sounding, but it’s honest and we know you enjoy them just as much as we do. Norman takes incredible selfies. He is the reason we have some of the best TWD cast selfies, he’s given us a ton of him on his bike – which are all awesome – and his personality really shines through as you look through his Instagram feed. He’s fun, he doesn’t care what people think as long as he’s embracing what makes him happy, and he likes to be around the people he loves. Easy to relate to and he’s easy on the eyes. Not a bad mix. 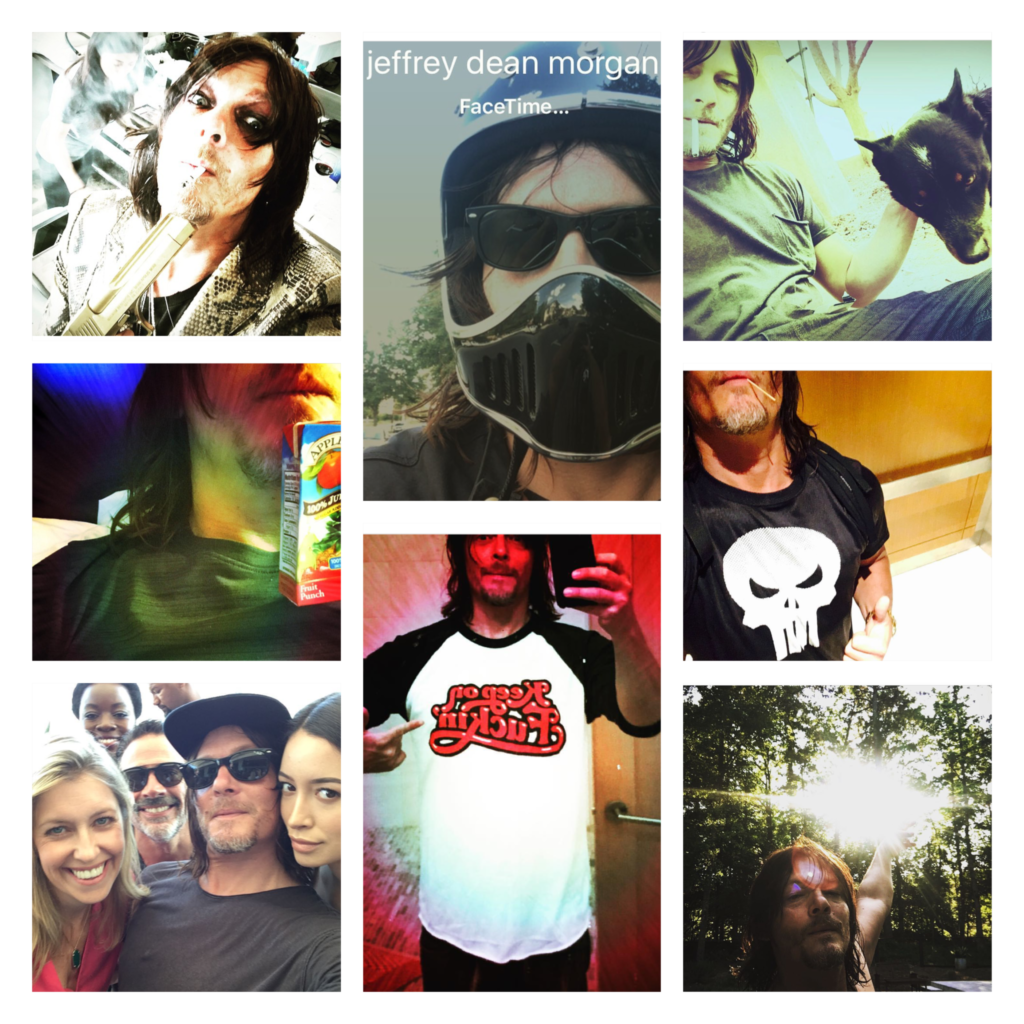