While recuperating from this past weekend’s holiday and this weekend’s New Year, let’s take a bit of time to celebrate and wish Michael Cudlitz a Happy Birthday!

Of course, Michael is a very accomplished actor appearing in several films and television series throughout the past few decades but we best know him for his role as Abraham Ford on AMC’s The Walking Dead. 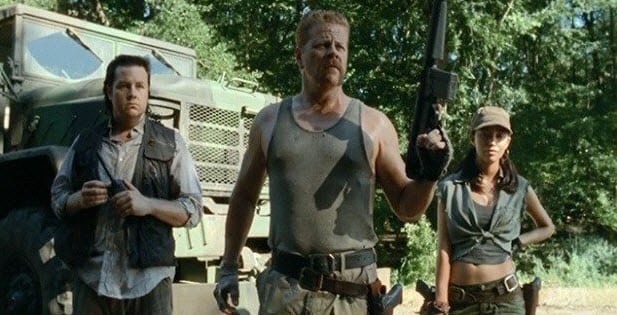 Michaels has also made small film appearances in Forces of Nature and Grosse Pointe Blank but his break out role was his role in Band of Brothers as Sgt. Denver “Bull” Randleman. He later went on the star in 5 seasons of the series Southland.

His role as Abraham Ford began in February 2014 in the episode “Inmates” (S04xE10). He quickly became a fan favorite with his off-the-wall, blunt comedic quotes. After helping Glenn find Maggie and ending up at Terminus along with his companions Rosita and Eugene, they soon all became trusted members of Rick’s group. Eventually, they would find themselves settling in Alexandria. He developed a relationship with Sasha, hurting Rosita in the process. In the sixth season finale, he and Rick’s group attempt to carry a sick and pregnant Maggie to the Hilltop for medical treatment but are stopped by Negan and his Saviors. As punishment for killing some of his men, Negan chooses a member of Rick’s group to die. The episode ends with Negan playing “eeny, meeny, miny, moe”, but it is not revealed who he lands on until the seventh season premiere.

In the premiere of the seventh season, we finally find out that Abraham was the unlucky chosen victim of Lucille, Negan’s barbed-wire bat. Realizing he has seconds to live, his last thoughts are of Sasha as he signals to her by motioning a peace sign with his hand. After Negan hits him once in the head leaving him bleeding, Abraham’s last words are “suck…my…n**s.” Negan swings again, eventually killing him and leaving us fans horrified and devastated.  He also later kills Glenn in front of Maggie and…well…I just can’t!

(I have NEVER cried so much or hard like I did in the seventh season premiere…I mean, UGLY CRY!)

Thank God it’s NOT a documentary and all make-believe and that Michael is alive and well!

Michael is married to his wife Rachael and the couple has twin boys named Max and Mason.

We can still see Michael as Abraham on past episodes of The Walking Dead through various forms of streaming platforms or through upcoming marathons on AMC. He also makes several appearances at conventions like Walker Stalker/Fan Fest several times a year. Make sure to catch him at a venue close to you in 2018!

We love you Michael and your portrayal as Abraham Ford! Can’t wait to see what the future hold for you!