Calling all readers! Let’s celebrate our freedom to read!

Here’s a list of books, in no particular order that have been banned since 2010 and for more lists, because this one is by far incomplete- click on over to The American Library Association (ALA.org) and you can find all sorts of information about banned books and censorship. 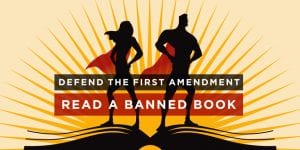 So stand up and speak out for the freedom to read. Go read a banned book!

Which banned books are you reading this week?