Are you all ready for a new Halloween film? I know I am. The film franchise has been my favorite since I was a little girl. Yes, I used to watch them when I was little and I turned out fine. Of course, the first Halloween is the best and is the scariest of all the sequels or reboots. There was something about Michael Myers lurking in the shadows just watching and waiting for the right moment. That meant that he somehow had conscious thoughts.

Now, In the original Halloween, Michael Myers was human. Somewhere along the line he became immortal. Was it at the end of the when Dr. Loomis shoots him six times? He may have shot him, yes, but what if it was just a graze and that’s how he got up and walked away. Now in Halloween II, Myers is burned by Loomis inside Haddonfield Memorial Hospital. We see him collapse and fully engulfed in flames. Now by the fourth Halloween film, he is in the psychiatric hospital awaiting transport and his body looks slightly scared by his burns. 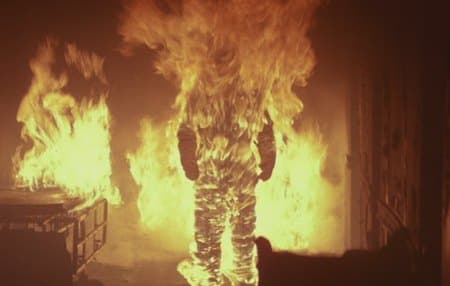 And it all goes downhill from there. Yeah…I know way too much about these movies. Later on, in a different post I will go into detail on what never made sense about the franchise. So let’s get into the reason for my article today.

There has been buzz for years about the new Halloween movie being produced. First it was to be directed by Marcus Dunstan but then that got scrapped. This time it will be produced and co-written by Danny McBride along with John Carpenter and directed by David Gordon Green.

Recently, McBride was on The Jim Norton and Sam Roberts Show and he released news regarding when the film will be starting production. While promoting Alien: Covenant, he was asked about any news regarding the new Halloween film.  He stated:

“We’ve been cracking away on that. We’re gonna shoot it this fall.”

Short, but oh so sweet!! I bet you can see the excitment on my face from where you are right now! (insert jig of glee here) Now, if you’re a true fan, you already know that the original film was not filmed during the fall. Production crew had trash bags full of leaves and had to sprinkle them on the ground in the shots that they were filming, After wrapping up the shot, they had to wrangle up all the leaves that they could and move to the next shot. #HalloweenFunTimes #ProductionLife

Hopefully, the film will stay in the works because it sounds like it could be a good one, especially with Carpenter on board.

The new Halloween movie is scheduled, fingers crossed, to hit theaters on October 19, 2018.