It’s officially November, which means that is it now acceptable to be #TeamChristmas.

me on October 31 vs me on november 1 pic.twitter.com/EtOclhq0wo

More importantly, though, November marks the start of Lifetime channel’s pride and joy – the Christmas movie extravaganza – It’s a Wonderful Lifetime. It’s basically two straight months of holiday romances, family fun and a lot of familiar faces. So, get your calendars out and mark down these 14 new movies premiering on Lifetime this year! 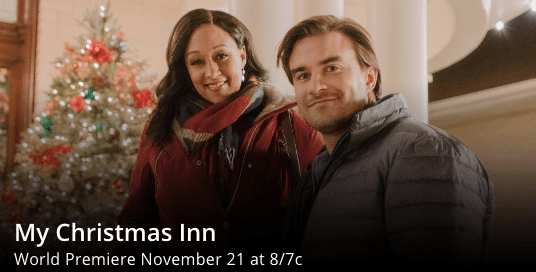 Official synopsis: “With the holiday season in full swing, Jen Taylor (Mowry-Hardict) is about to score a big promotion at the San Francisco ad agency where she works. But her life is unexpectedly turned upside down when she inherits a cozy inn in Alaska from her aunt. When she goes to inspect the property and meets handsome town attorney Steve Anderson (Mayes), she’s surprised to find that nothing is what she expected. The small town community is full of fun and festive Christmas traditions and soon, Jen starts wondering if the inn might just be the place she belongs, and if Steve could be the Mr. Right she has been waiting for.” 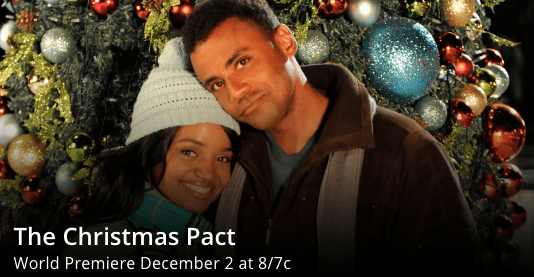 Official synopsis: Can best friends fall in love? That’s the question next door neighbors Sadie (Pratt) and Ben (Joseph) will answer as they keep the spirit of Christmas and the magic of their childhood pact alive! When they were eight years old, they planted a scrawny 3-foot tall Christmas tree behind their church and the Christmas Pact began. But as life gets in the way the pact is threatened to be broken. Ben and Sadie need some Christmas Magic to recommit to each other and promise to keep their special holiday traditions. With each Christmas that passes by, Ben and Sadie’s Christmas tree grows taller and stronger; and so does their love. The pact bearing fruit to the magic of Christmas and the undeniable answer. Yes, friends can fall in love!” 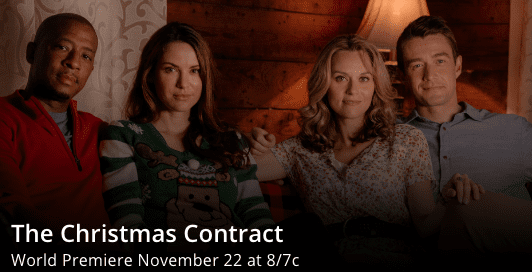 Official synopsis: “It’s Jolie’s (Burton) first time going back home to Louisiana since her devastating break-up with Foster Burke). Seeing him is inevitable as their parents run the town’s annual Christmas Market together, but when she discovers Foster is bringing home a new girlfriend, Jolie cannot bear the thought of going home alone and seeing them together. Her best friend Naomi (Ackles) suggests that Jolie bring her flaky brother, Jack (Buckley), home for Christmas as he has no plans this year. Jolie, a professional web designer, is hesitant; so, Naomi, a lawyer, creates a Christmas contract to give them both something they want—a buffer for those awkward moments around Jolie’s ex and a website to help sell Jack’s upcoming novel. Unbeknownst to them, the Christmas contract proves to be so much more than what they signed up for.” 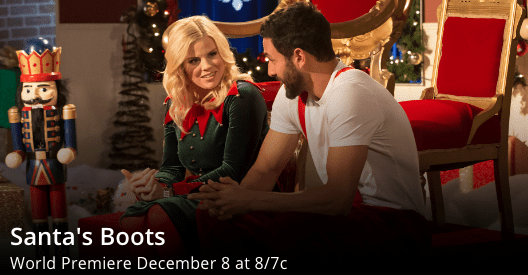 Official synopsis: “When Holly (Hilty) returns home for Christmas expecting the same as any other year, she’s blindsided to learn her family’s department store is on the brink of foreclosure. To keep the business going, Holly fills in as Santa’s Helper and meets the surprisingly young and handsome Nick (Mills), who has been hired to play Santa at the store this year. Their undeniable chemistry and charisma draw in big crowds, until suddenly, Nick disappears. As Christmas day inches closer, Holly scrambles to find Nick with only one clue – his misplaced black boot.” 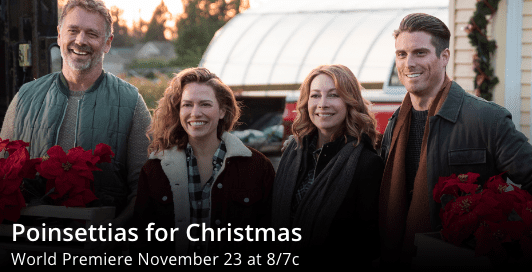 Official synopsis: “It’s just weeks before Christmas when Ellie (Bethany Joy Lenz) gets a call to return home to help her father (John Schneider) on the family’s poinsettia farm. The family business is on the line to deliver tens of thousands of plants for the town’s annual parade. The problem is — the poinsettias have yet to turn red! As Ellie searches for the solution, she is reminded of where her heart truly lies as she falls in love with both her roots and a local botanist (Marcus Rosner).” 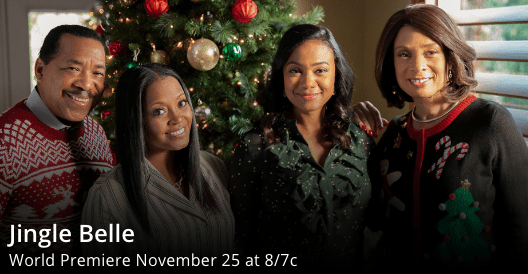 Official synopsis: “Every year, Isabelle (Tatyana Ali) and her high school sweetheart Mike (Cornelius Smith Jr.), rocked their small town’s annual Christmas Eve Pageant with a sweet Christmas duet. But after graduation, Isabelle left to study at Juilliard in New York – leaving Mike behind. Years later, when Isabelle returns to her hometown to write music for the annual Christmas Eve Pageant, she is shocked to learn that Mike is the one directing the show. Can Isabelle and Mike put the past behind them and reunite on stage for another show-stopping duet?” 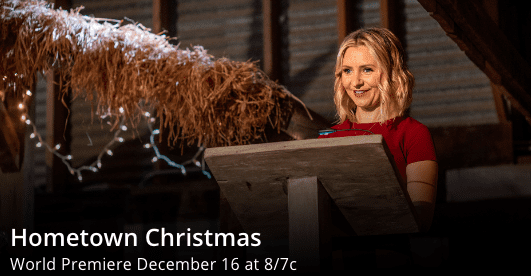 Official synopsis: “Back in Louisiana for Christmas, Noelle Collins (Mitchell) has big plans to resurrect the town’s live nativity, a beloved tradition that her late mother used to put on. Things become complicated, however, when Noelle runs into her high school sweetheart, Nick Russell (Colletti), a rising baseball star also back home due to a recent injury. Still feeling the burn from their senior year break-up, their lives are pushed together even further when they learn their parents share an attraction and want to be more than just friends. When things begin to fall apart with the live nativity, Nick and Noelle reluctantly team up to pull off the show and find themselves growing close, uncovering a hometown love for each other and the joy of Christmas that both never really faded away.”

8. Every Day is Christmas 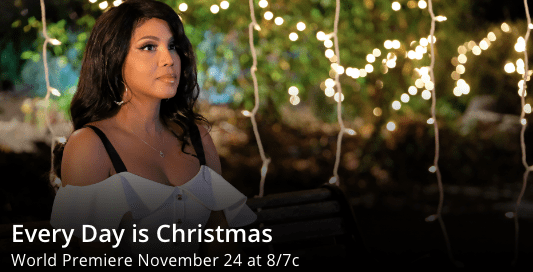 Official synopsis: “Inspired by the Charles Dickens classic A Christmas Carol, shrewd money manager Alexis Taylor (Braxton) gets the holiday visit of a lifetime. A self-proclaimed workaholic who ‘humbugs’ love, Alexis ends up embracing the spirit of Christmas when her past, present, and future collide, forcing her to risk the one thing money can’t buy: her heart.” 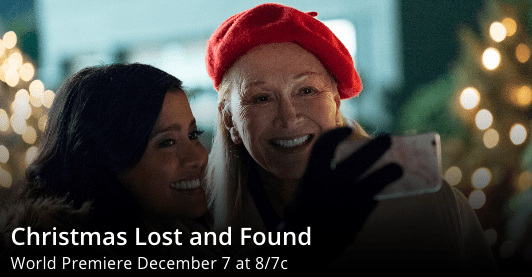 Official synopsis: “After years of missing family gatherings, New York City event planner Whitney Kennison (Sircar) is off to Chicago to spend Christmas with Grandma Frances (Ladd). Excited that her granddaughter is finally home for the holidays, Frances decides to bestow Whitney with the precious Kennison family Christmas ornaments. But when Whitney mistakenly throws out the box of ornaments, Grandma Frances must stealthily devise a fun Christmas scavenger hunt to remind Whitney what the holiday is all about. It’s a race against time as Whitney reclaims the family ornaments, finds romance and learns the lesson Grandma Frances imparts.”

10. Christmas Around the Corner 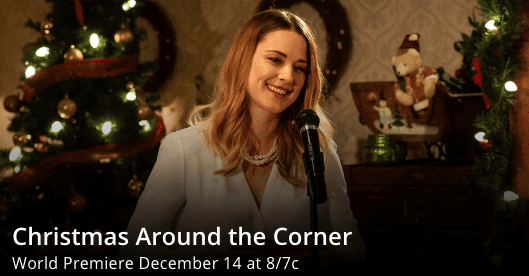 Official synopsis: “Claire (Breckenridge), a savvy venture capitalist from New York City, escapes to a quaint town in Vermont for the holidays and becomes a guest of the Fortenbury Bookstore. Upon arrival, Claire finds Christmas celebrations have been canceled by the town after a flood and the bookstore is in a dire state of disrepair. She immediately takes on the challenge to revitalize the store, but clashes with the owner, Andrew (Spilchuk), who initially rejects all her proposed improvements. Eventually, sparks fly as the two begin a budding romance, and Claire’s infectious optimism inspires Andrew to join her in reviving the yuletide spirit. But everything comes to a screeching halt when Claire discovers that Andrew is planning to sell the bookstore in the New Year. Will the spirit of Christmas be enough to change Andrew’s mind and encourage him to follow his heart?” 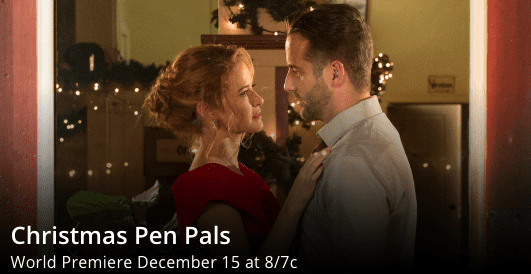 Official synopsis: “Following an unexpected breakup weeks before Christmas, Hannah (Drew), tech wiz and creator of the dating app, Perfect One, heads home for the holidays, challenged to save her failing business by re-conceiving a new romantic dating model. Upon her return she runs into her high school boyfriend, Sam (Matter) who she has carefully avoided for years and reluctantly makes a deal with her dad, Ted (Gross) to sign up for the town’s Christmas Cupid, an anonymous holiday pen pal service. As the season progresses, Hannah is smitten by each beautifully written letter she receives and starts to believe that her Christmas pen pal could be her soul mate. It’s not until Christmas Eve that everyone must reveal their true identities to their pen pals, even if it means coming face to face with the last person they ever expected.” 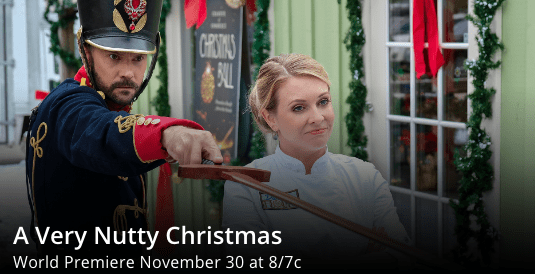 Official synopsis: “Hard-working bakery owner Kate Holiday (Hart), has more cookie orders than she has time to fill this holiday season, and when her boyfriend suddenly breaks up with her, any shred of Christmas joy she was hanging onto, immediately disappears. After Kate hangs the last ornament on the tree and goes to bed, she awakens the next morning to a little bit of Christmas magic. She gets the surprise of her life when Chip (Watson), a handsome soldier who may or may not be the Nutcracker Prince from Tchaikovsky’s “The Nutcracker,” appears in her living room.”

13. A Twist of Christmas 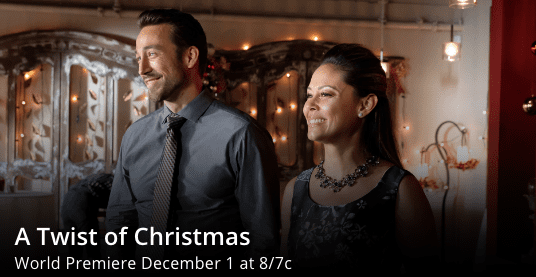 Official synopsis: “In the frenzy before Christmas, two single parents — busy working mom Abby (Lachey) and her son, and overwhelmed lawyer Ryan (Zub) and his daughter — accidentally mix up their toys at a crowded department store. As a result, both of their Christmases appear to be ruined. Although the two can’t stand each other, the only way to get things back on track is to help each other salvage their holiday plans – not realizing they’re falling for each other in the process.”

14. A Christmas in Tennessee 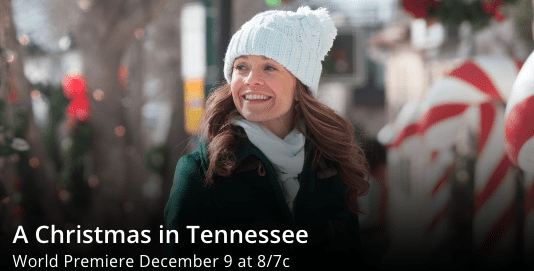 Official synopsis: “Allison Bennet (Boston), along with her daughter Olivia and mother Martha (Richardson), run a bakery in the small mountain town of White Pines, Tennessee. When Matthew (Walker), a charming real estate developer, tries to buy the town for a corporate ski resort, Allison and the townspeople must work together to prevent that from happening. And just when the Bennet ladies seem out of luck, an unexpected visitor — with a well-known sweet tooth for cookies and milk — comes to the bakery and may, in fact, be the key to solving everything.

What Lifetime Christmas Movies will you be watching this year?!  Let us know!