Guardians of the Galaxy Vol. 2 comes out in two weeks and the excitement is growing just as much as the cast of heroes have! Not only are all 5 Guardians returning (albeit one much smaller and cuter), but we also have two former villains returning as heroes – Yondu and Nebula. Now throw in a new heroine named Mantis and the long awaited reveal of Peter’s father, and we have an absolutely tremendous cast of characters! But did you know there was originally supposed to be one more – Adam Warlock!

Now even if you don’t know who this is, many of you have probably heard the name “Adam Warlock” tossed around when Guardians of the Galaxy came out, as there were theories that the cocoon in the Collector’s den was his. You see Adam Warlock is a godlike being that not only possesses the Soul Gem but also occasionally assumes a cocoon-like form to regenerate his powers. Though whereas the cocoon in GotG was an Easter Egg of Adam Warlock it was not meant to say “Adam Warlock is inside this!” 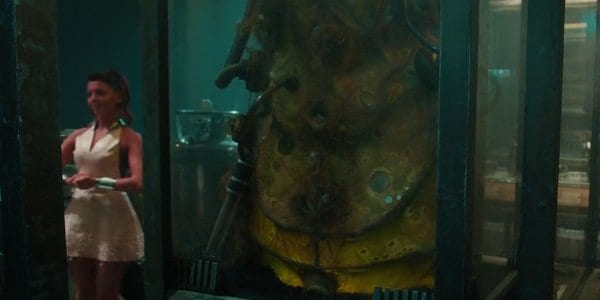 In an interview with Slashfilm at a press meet earlier today, James Gunn revealed that they originally intended to include Adam Warlock and had a cool new twist with his story, but it ultimately would have been too crammed a film.

“I love Adam Warlock. He’s one of my favorite characters. In all truth, I wrote an early treatment where I had Adam Warlock… He was a big part of the screenplay and I realized it was one character too many. And I adored the character. I adored what we had done with him. I think we did something really creative and unique with Adam Warlock. But it was one character too many and I didn’t want to lose Mantis and Mantis was more organically part of the movie anyway. So I decided to save him for later.” – James Gunn

“Later” huh? So does that mean Adam Warlock will appear in Infinity War? Well the leading theory right now is that Heimdall has the Soul Gem and Hela takes it in Thor Ragnarok, Additionally, having him assemble the heroes like he did in the comics would be too rushed since he hasn’t been introduced yet. Thankfully Slashfilm also got to catch up with Kevin Feige at the event and asked straight out if Adam Warlock was in Infinity War, to which he said:

“He’s not. He’s not in Infinity War. But he will be a part of the future Marvel cosmic universe and a pretty important part of that.” – Kevin Feige

Earlier this week, I reported on how James Gunn is now confirmed to be working on Guardians of the Galaxy Vol. 3 and will play a major role in helping shape the Marvel Cinematic Universe beyond even this (aka Phase 4). Well considering James Gunn is such a huge fan of Adam Warlock and their retelling of him, I think it’s safe to say he’ll have a hand in working with him. So could this mean that we’ll see him in Guardians of the Galaxy Vol 3 as they work to clean up after Infinity War? Well, yes and no. Nothing is confirmed yet, but if this character is as unique as Gunn says – and with the MCU in need of a new roster of heroes post Phase 3 – having Adam Warlock introduced in GotG Vol 3 and then given his own film could be an option as well. As you can imagine, being engineered as a god-like being and having the soul gem have led to some pretty interesting stories over the years. Plus there’s even an evil future version of Adam Warlock named Magus!

Where Marvel will go with this is still unclear at the moment, but we can be sure of two things. 1) If Gunn is especially proud of this character, he’ll go on to be great! 2) It’s a good idea they didn’t cram another important into Guardians of the Galaxy Vol 2.