“I prefer the company of the streets. I prefer the job description of social justice warrior. Call me Green Arrow.” – Oliver Queen 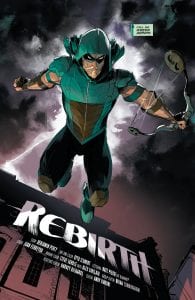 When Green Arrow goes out to patrol Seattle he runs into Dinah Lance a.k.a. Black Canary,  who is taking a homeless kid to safety before he too is kidnapped. The boy is looking for his mom who was kidnapped the night before by people from the sewer.  Green Arrow and Black Canary’s investigation leads them to an underground (literally underground) group of mole people kidnapping homeless woman and children off the streets and auctioning them to masked people on video screens. Oliver vows to stop the evildoers. 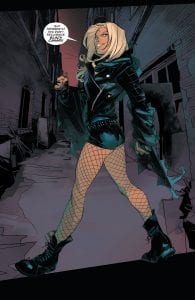 Benjamin Percy takes a more horror like approach in storytelling here as he showcases Oliver Queen as a rich and generous man who gives out 100 dollar bills to homeless people. Little does he know almost every night a homeless person is kidnapped and disappears forever.  The violence is pretty graphic but no bad guys are killed.  A nice approach as I was expecting bad guys to have arrows in their heads and not in their legs and shoulders. Black Canary and Green Arrow are back together and this time its done right. I expected less from this but, he really did a good job of showing us more about Oliver Queen and his moral issues. Oliver now has his hands full as he has declared war on his version of the court of owls. 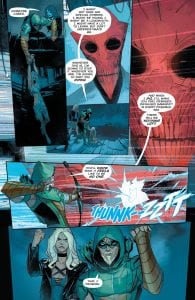 Otto Schmidt’s art was done very well.  Simple, effective and to the point. He makes you feel like you’re part of the action. Highly recommended first issue as Green Arrow’s rebirth is off to a good start! 5 out of 5 stars!

Next Issue: “THE DEATH AND LIFE OF OLIVER QUEEN” Chapter Two: In issue #2, Green Arrow is betrayed, broken and left for dead. He wakes up in a world where the once-wealthy Oliver Queen has no resources and only the faintest clue what’s happened to him. Meanwhile, in a distant land, an old ally begins a quest to help the Emerald Archer in his darkest hour.