Scream Queens is surprisingly addictive, despite being a morbid mishmash of every dumb horror movie cliche ever. But one of the (still living) characters that was missing from season two was protagonist Grace Gardner, the quirky, likeable young feminist who joined the ranks of Kappa Kappa Tau to feel closer to her deceased mother, and wound up smack-bang in the middle of a sorority sister slaughtering spree. As of now, Grace is  residing in a mental asylum, having finally snapped after dealing with the creepy, too-close-for-comfort events of her freshman year.  But we didn’t want to let that stop us from giving her her own personalized reading list, since her season one self was pretty awesome. Also, we’ve taken the liberty of pretending Pete is still alive (yeah, he nuttier than a jar of Jif, but he was a hot nutty, y’know? Oh no. I sound like Chad Radwell) because that was just something that had to happen. Without further ado, here is Grace Gardner’s reading list: 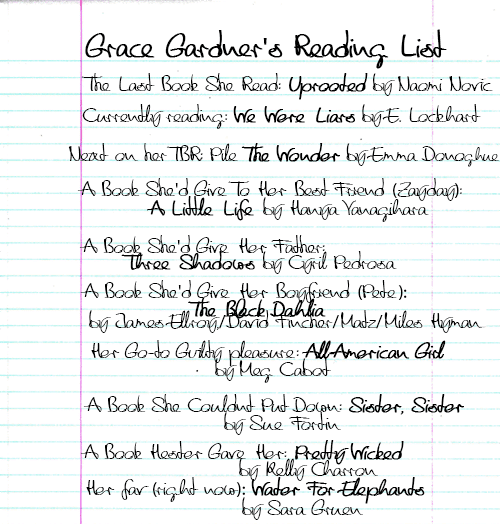 In case the font is a little too hard to read, here are the books in order:

The Last Book She Read: Uprooted by Naomi Novic

Currently Reading: We Were Liars by E. Lockhart

Next On Her TBR Pile: The Wonder by Emma Donoghue

A Book She’d Give Her Best Friend (Zayday): Little Life by Hanya Yanagihara

A Book She’d Give Her Father: Three Shadows by Cyril Pedrosa

A Book She Couldn’t Put Down: Sister, Sister by Sue Fortin

A Book Hester Gave Her: Pretty Wicked by Kelly Charron

Her Favourite (right now) Water For Elephants by Sara Gruen