If you guys have been keeping up with Batman then you know that Gotham has a new vigilante! A mysterious new character showed up in Gotham in the wake of the Joker War. An old friend reunited with Bruce Wayne but not in a good way. It seems this mysterious stranger is someone that Bruce actually trained with. They became kind of rivals as they traveled the world, learning the skills they would need for their respective missions. They had a falling out when this old friend found out that Bruce was doing this for his parents, in a way. This old friend would go on to take the title of The Ghostmaker. Bruce and he came up with a deal where he stays out of Gotham. Seeing Batman as incompetent because of The Joker War he shows up in Gotham. After a bit of fighting, they team up again. Now Ghostmaker is getting a backup story in the ongoing Batman comics, which has been pretty cool so far. We’ve learned that Gotham’s newest vigilante is an LGBTQ+ character! 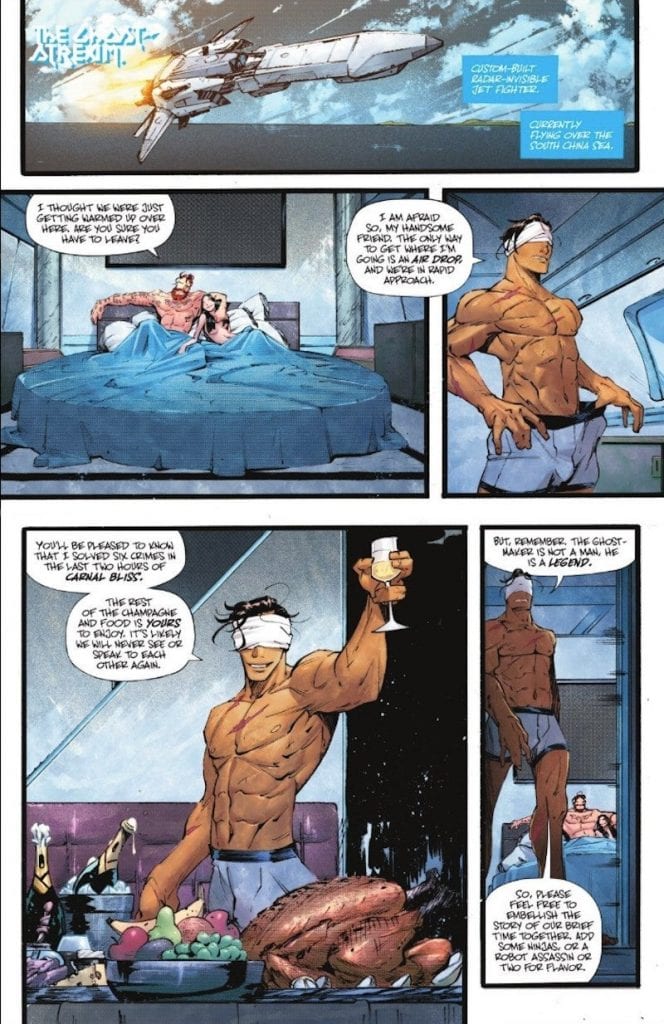 The latest Batman issue, #107, opens the Ghostmaker storyline in a pretty crazy way. He’s flying on his personal plane, the Ghost-Stream, and he’s been partying. Partying hard, if you know what I’m saying. The book opens after he’s just finished having sex with a lovely redhead and a viking. A devil’s threesome, someone would like Lucifer, I think! He even makes a comment about how they indulged in carnal bliss for two hours! Way to go Ghostmaker. He even solved crimes while doing it! His lovers seem to want him to return to bed, but he ain’t got time for that. He’s forced to leave them with food and champagne and even says they’ll likely never see each other again.

His computer chastises him for indulging afterward, but he claims it was more of a meditation technique. Regardless, it seems obvious that man or woman, it doesn’t matter to Ghostmaker. I’m always for more representation, so way to go Ghostmaker!

Are you glad Gotham’s newest vigilante is a LGBTQ+ character?

Batman #107 is available now both in print and digitally.