I loved Jamie Chung as Mulan in Once Upon a Time. She was the perfect choice ans she wasn’t one to mess around with! Now that Fox announced that they casted Jamie Chung, I cannot be happier.

TVLine had an exclusive on the whole Vale mystery. As you see by the name, Valerie Vale is related to the one and only Vicky Vale. Valerie will be Vicky’s aunt according to TVLine.

“TVLine has learned exclusively that Once Upon a Time warrior Jamie Chung has been cast in the recurring role of Valerie Vale. Gotham Gazette‘s newest hire, Valerie is a crackerjack reporter dead set on uncovering the truth behind Indian Hill. Confident and dogged, she will do anything to get the scoop, and soon sets her sights on Gordon, who she believes is the key lead in her story.

It’s not clear what connection, if any, Valerie has to that other Vale, DC Comics icon Vicki. UPDATE: A source confirms that Valerie is Vicki’s aunt.” – TVLine

Not only this amazing news, but also the name of the first 2 episodes have been revealed! Drew Powell, the talented man behind the character Butch Gilzean, tweeted a picture of the two scripts. The first script and first episode will be called ‘Better To Reign in Hell’ and is written by John Stephens. The Second Episode will be called ‘Burn the Witch’ and is written by Ken Woodruff. For these episodes, Danny Canon gets the honor to direct them, just like he did 4 other episodes and the pilot. 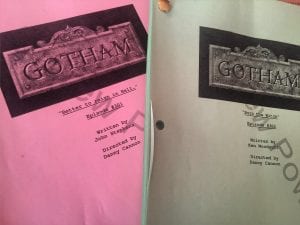