Hello my dear Gothamites, it’s time for yet another recap of Gotham! Last week we ended with a scene where Penguin was somewhat emotional. He was in the car with Martine and told him he’d been a good friend. As for Sophia Falcone will ‘answer for what she has done.’

This weeks episode, however, starts off in Arkham Asylum with a soft tune while the crazies are in their recreation room. We see different things, people painting without paint, people telling themselves that Thursday is their day, a girl trying to put some makeup on. You know, the usual, until Professor Pyg stops the music abruptly and starts a new tune. Shortly after that, he kills someone.

Now we see one of the pictures we saw in the preview images come to life. Lucius Fox and Jim Gordon (Ben McKenzie) are standing before X-rays of a head at the lab at the GCPD. Now we know that the scans are from Professor Pyg’s head, with a twisted side to it. Now we see why Professor Pyg said ‘I paid a lot to look like this.’ He had many surgeries, burnt off fingertips, just so that no one could ID him.

Back in the club in the Narrows, Lee Thompkins (Morena Baccarin) started a court so that she can settle disputes between champions and the trainers. Lee makes sure that every one of her patients gets well. But, Edward Nygma feels like she’s ignoring him even though Lee said she would help him. That’s not the only thrilling thing that happens in that club. A person named Sampson is testing Lee on her leading skills and punched one of Lee’s guys a bloody nose.

After that Penguin (Robin Lord Taylor) surprises Sophia Falcone in her home. But, Penguin didn’t come alone. He brought Victor Zsasz along. He explains to her face how suspicious he was with every turn they took together. He tells her that Martine saw her and Jim Gordon together kissing. There is no way out of this, and if we take a look at Sophia’s face, she knows as well. That’s why she comes clean. Penguin then introduces Sophia to The Dentist. He’s not the kind that gives out lollipops after a visit. Noted.

Back at Arkham Asylum, Jim Gordon takes a trip to visit the incarcerated Professor Pyg. Jim cuts right to the chase and asks Pyg who he is. After getting the reply that Pyg is a reflection of Jim, Jim hits him in the face. After that, Professor Pyg clicks his face right into place.

At the other side of town, Lee Thompkins takes her team and visits Sampson and his gang. After some banter of how Sampson is taking everything that Lee has, he starts coughing. Lee makes a full screen from where she’s standing, and she said that Sampson could die from the virus if not treated.

After a close encounter with The Dentist, Sophia gets abducted by Gotham’s Sirens (Barbara, Tabitha, and Selina Kyle). From the first chair where she was tied up, Sophia goes to the next. She wakes up and yet again, she’s tied up to a chair. Here, Sophia meets the three ladies that abducted her. She makes them an offer they possibly can’t refuse and promises to get Penguin out of the way.

Back in the Narrows, Lee and Edward make their way to Lee’s office. Only to see someone broke in and destroyed the place. Edward still tries to persuade Lee to take Grundy and make deals the hard way. But, Lee lets Edward know she has a better idea. And boy, is Lee a badass! She poisons Sampson (as it were the only vials that survived were poisons and the antidotes for them) and coaxes him to leave the Narrows by the end of the day. That way he gets the antidote and Sampson gets to live.

Gordon puts Sophia back on the train and Penguin is very happy. Penguin was about to forgive Martine when he only finds his sketchpad with a drawing what seems to resemble Sophia holding a gun and Martine in front of her. The word ‘kidnapped’ written beneath the picture. Which only means one thing. Gotham’s Sirens are mixed in it as Sophia is on the train. Zsasz somehow finds his way on that train and asks where Martine is. Sophia has her answer ready and asks that Penguin meets her at the Crownpoint Bridge.

Penguin saves Martine and says sorry to the little man. What happens then has shocked me. Penguin blows up the car where Martine was sitting in. A shooting war starts right after that between Penguin’s tugs and the Sirens. 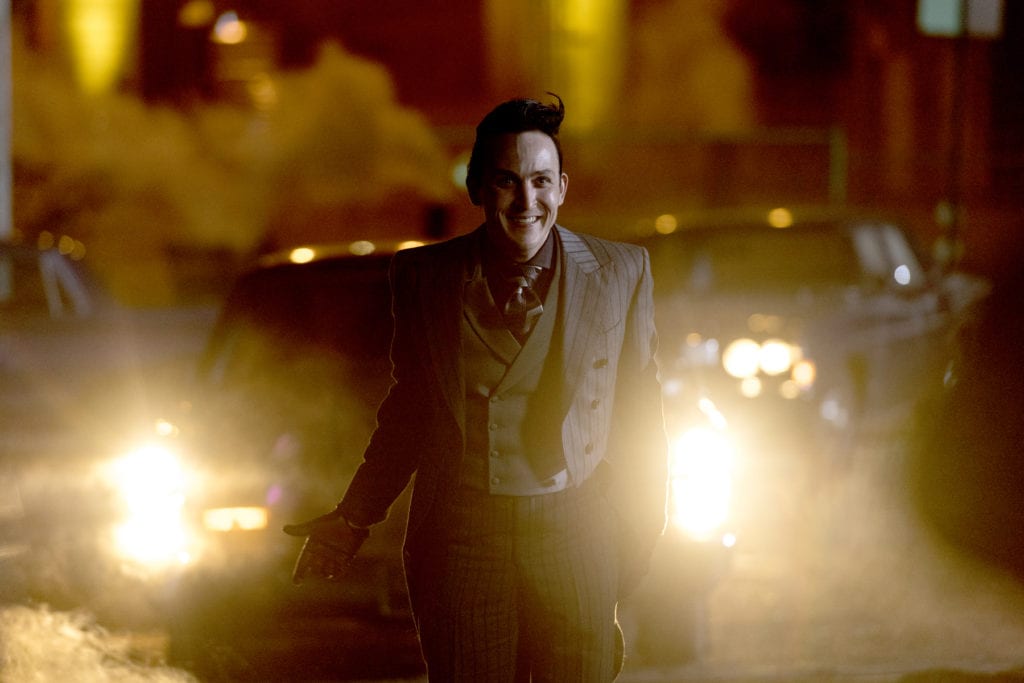 But… Penguin did not blow up Martine. He just made it look like it.

The episode ends where Edward Nygma is standing in front of the mirror and sees himself again. In other words, the Riddler is BACK! But, he doesn’t seem too thrilled with that.

This episode was all kinds of thrilling, and we will see you back next week when the next installment of Gotham airs!

What did you think of this episode? Discuss it with us in the comment below!

Gotham’s next episode will air on Thursday, December 7 on FOX.