Well hello, Gothamites. Another week has passed, and it’s time for a new recap. Last week, we left off on Sophia Falcone making sure Jim Gordon knows she is in charge. Back in Arkham Asylum, Oswald was pestered by Jerome to get the proper Penguin back to his ‘normal’ state. Even though Jerome thought it was him that helped, it was, in fact, Edward Nygma leaving a Riddle that brought him back. Looking back at Ivy, she is up to something with the Lazarus water she stole, and we are dying to know, while Bruce Wayne called Alfred back into his life (literally).

The episode starts where Bruce opens his suitcase with his protective gear and mask. Now that he has hallucinated about his future, the logical thing to do is to put it back on and protect the streets of Gotham. However, once he gets the mask in his hands, he throws it into the fireplace.

He meets Alfred at a local diner and asks him if they can go to the annual dinner of Bruce’s late parent’s foundation. Alfred, however, is not having it and tells Bruce to speak up. Bruce, for the first time in a very long time, is honest about what he’s going through and shows Alfred he can’t figure it out alone. To everyone’s surprise, Alfred straight up tells Bruce no. He says to Bruce that he needs to figure out something to prove to him that he did change. 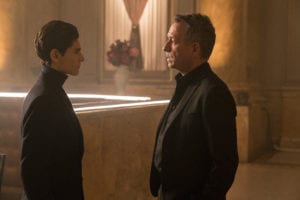 Following the story of Ivy, we see her stepping into a bar in broad daylight. She quickly gets annoyed about the guy eating in a very obnoxious way. She leaves a very personal message into the bar and kills everyone there with her new flower breed for the GCPD to find. They immediately see it’s a new form of what they saw last. Lucius Fox quickly puts two and two together and knows Ivy made something with the Lazarus water. Jim Gordon panics and asks where Bullock is. Bullock killed Ivy’s father back in the first season, and Ivy made sure the message was for him.

Ivy releases a video on the news and lets everyone know just how much she worships plants. She has the power and is giving Gotham back to the plants. Later on, we see that Harvey Bullock calls Jim to an abandoned place on a lead where he has seen Ivy. Of course, this was a set up by Ivy and Jim is once again in big trouble. Harvey is entirely under Ivy’s spell and held Jim at gunpoint. When Harvey is knocked out and back up in the real world with his mind, they go over what Ivy told him, and they conclude she is going to a party. What party did we hear about in this episode? Bingo, Bruce Wayne’s parent’s yearly foundation dinner.

Next up we get a closer look at the relationship Sophia Falcone, and Lee Thompkins have. Remembering Mario as the ‘good man’ he was. Sophia lets Lee know that even if Mario is gone, she will always be a sister to her. Nevertheless, Sophia still makes sure she gets to rule every part of Gotham and asks Lee for help in that department. Lee lets her know that the Narrows never bend the knee to an outsider. So, she asks for a tax of 30%. Later on, Edward makes a plan to take down Sophia. All while battling his other self to be kept hidden not to kill Lee.

In the end, Alfred did go to the annual dinner party for Bruce just in time for Bruce to change his speech and prove Alfred he needs him. Of course, as expected Ivy crashed the party and took her first public victim. Alfred tried to take her down, but he gets knocked out by one of her followers. While everyone is screaming chaotically, all the lights go out. We immediately know what’s going on and Bruce attacks the shooters out of nowhere. While Bruce tries to pull Alfred away from the shootings, Alfred tells Bruce this is who he is. Bruce puts his scarf back over his nose and starts fighting off some more men. It is the first episode where we see what Bruce wants to do in life. He knew it all along. He just needed Alfred to show him the way.

All in all, this episode was once again on point. Every storyline has a way of connecting to one bigger storyline. It’s something I like to see in shows. Gotham has a way of slowly becoming one of my favorite shows by exploring further and further every storyline of the heroes and villains to be in Gotham City. We even saw the first fight between Ivy and Selina. Edward Nygme, or The Riddler, is finally set free and is ready to help Penguin escape out of Arkham Asylum.

What do you think Ivy’s next steps are? What about Bruce? Will he already get back to Lucius Fox for a new mask to help the people of Gotham?

We’ll have to wait and see. Gotham’s next episode will air on Thursday, March 22 on FOX.