Gather your Binx’s and your talking skeletons-only a few months until Halloween and one thing we can’t go without is Hocus Pocus!
Disney’s classic film based on the crazy three witches stars the fan favorite witch sisters, i.e. Bette Midler, Sarah Jessica Parker, and Kathy Najimy as Winifred Sanderson, Sarah Sanderson, and Mary Sanderson, celebrated its 25th anniversary in July. The celebrations are yet to come to an end seeing as Halloween is almost here. The franchise has scheduled a special edition version of the Hocus Pocus Blu-ray which comes in three different flavors.

The standard edition: currently, fans can pre-order the Special Edition Hocus Pocus Blu-Ray for $9.99 on Amazon and the Anniversary Edition for $19.99.

A pretty awesome version designed after the evil spell book is also available on Best Buy. The only difference is that it’s made out of steel instead of human skin and moving eyeballs. It’s available for reservation at $29.99. 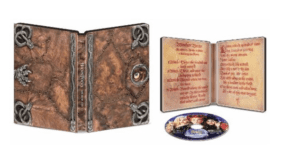 Finally, Target has their own special edition version of the Hocus Pocus Blu-ray which has an alternate cover and a limited edition 40-page gallery book. It’s available for reservation at $17.99.

The above mentioned versions are scheduled to arrive on September 4th. There are sure to be spooky special features included on the special edition, and fans who already have Hocus Pocus on Blu-ray cannot go wrong with any of the versions we’ve mentioned above.