The Emmy Awards are one of the most prestigious nights in television, bringing together both the creative teams behind your favorite shows and the actors who work on them for a night of accolades celebrating the best on TV that year. While the actual Primetime Emmy Awards Ceremony is this coming Sunday night, the Creative Arts Emmy Awards took place last night. Here at Fan Fest, we are very big fans of both This Is Us and The Handmaid’s Tale and last night those two shows were recognized in the Outstanding Guest Actor and Actress in a Drama Series category with wins going to Gerald McRaney and Alexis Bledel.

Gerald McRaney took home his first ever Emmy award for his portrayal of the lovable and wise Dr. K on NBC’s breakout show, This is Us.

“My first thought was, ‘Did I hear that right?’ and when Delta (McRaney’s wife) started reacting, I thought, ‘Well I guess I must have.’ So I went up on stage and I’m glad I heard it right because it would have been awfully embarrassing if I went and picked up someone else’s trophy.”

McRaney showered his This Is Us family with love and praise during his acceptance speech, including “(creator) Dan Fogelman for writing such beautiful show, Ken Olin for directing the episode of which I was nominated and the entire cast of this show who in so many ways make me better, especially Milo (Ventimiglia) and Mandy (Moore) who are simultaneously my colleagues and my masters.”

The two were clearly just as stoked to see their co-star take home the win and sent him their praise on Twitter.

The breadth of this man’s talent & generosity knows no bounds. I couldn’t be more thrilled that Mac was rewarded for this performance. ❤️❤️ https://t.co/uHsVTQBPqY

McRaney’s win is a good sign for This Is Us, heading into Sunday’s ceremony as they are up for 5 awards including Best Drama Series, Best Actor for Milo Ventimiglia and Sterling K. Brown and Best Supporting Actor and Actress for Chrissy Metz and Ron Cephas Jones. 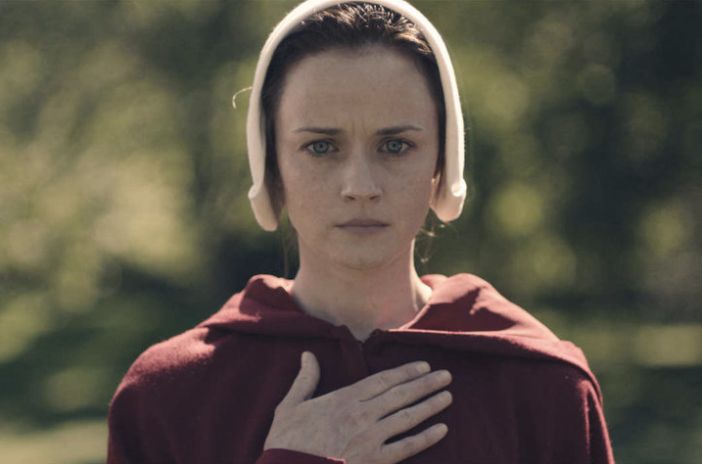 The statue for Outstanding Guest Actress in a Drama Series went to fan-favorite Alexis Bledel for her role as Ofglen in Hulu’s The Handmaid’s Tale. This was Bledel’s first nomination and win and to say that it was well-deserved is really an understatement as she has been consistently receiving rave reviews and praise for putting out the best work of her career in the challenging role.

In her acceptance speech, Bledel thanked her co-star and show’s producer Elisabeth Moss for “having her be a part of this affecting and incredible work,” in addition to writer Bruce Miller for creating a character “who displays such fortitude amongst such devastation and then suggesting that I play her.” She also spoke about the show’s political timeliness and its partnership with Change.org which she said “to encourage us all to take action … sign up, speak up and stay awake.”

The series was adapted from Margaret Atwood’s novel of the same name and will be heading into season 2 in unchartered territory as the first season ended when the book did. Bledel’s character was assumed to be dead, but it was confirmed that she would be returning to the show as a series regular in Season 2, so chances are we may be seeing her at the Primetime Emmy Awards next year! Bledel was visibly emotional backstage after the win and many people were super stoked that she won including Joss Whedon and her Gilmore Girls co-star Yanic Truesdale.

More from a visibly emotional #AlexisBledel backstage following her win. So cool to see her embrace this tremendous role.@HandmaidsOnHulu pic.twitter.com/aYsfs5fZpN

I don’t have a political pun or anything, I’m just really glad @alexisbledel got this https://t.co/sszQa2b4rn

So proud of your Work and your Emmy win @alexisbledel thrilled that your poignant performance got recognized!!

The Emmys have a long history of giving the awards to the same shows year after year, but these two wins could be showing that they are really focusing on the show and the content more so than ever.