Winter is coming and so is the new season of Game of Thrones!  Remember way back when we were all upset that season 7 was being pushed back and delayed?  Well, we are now less than two months away from the premiere date and the buzz about this season is starting really kick up.

Just yesterday, Entertainment Weekly revealed new series photos that seriously toyed with our emotions.  These epic photos really made us miss the snowy world of Winterfell and, not to mention the ginormous dragons (or as I call them, fire puppies).

Today, HBO released brand new poster art (seen at the end of this article) via the Game of Thrones social media accounts and it’s certainly setting an ominous tone for the upcoming season.  The new poster shows the fan favorite villain, The Night King, creepily glaring, with one bright blue eye, at anyone who looks his way.  HBO also released an animated version of the poster which totally gives us chills!  Look VERY closely at the Night King’s eye before the animation begins to pan out.  Does that look like anyone familiar to you? (cough cough, Jon Snow, cough cough).  Check it out below:

Pretty badass, right?  It’s safe to say, fans can expect to see this guy as an integral part of some epic battles in the upcoming season.  In a recent article from Entertainment Weekly, co-executive producer Bryan Cogman teased an epic clash of supernatural beings and beasts:

“There are White Walkers and dragons and once they start to come together the story has to go where it goes.”

So, what does all this mean for the second to last season of the series?  We’ll have to wait just a little bit longer to begin to find out.

Game of Thrones season 7 premieres on HBO, Sunday, July 16th at 9pm.  Are you ready? 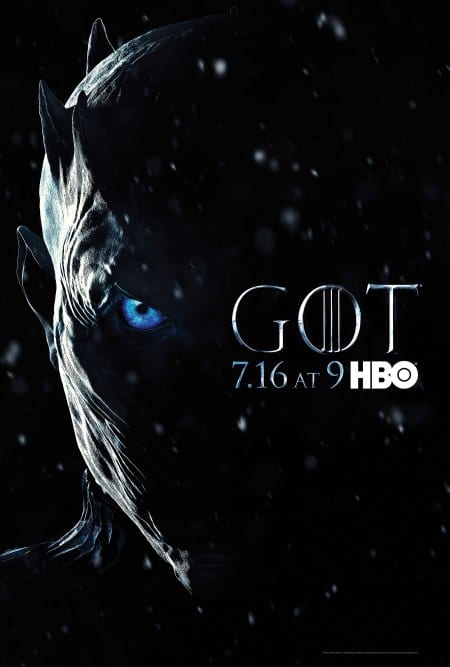 Home » Featured » ‘Game of Thrones’ Season 7 Poster: The Night King has his eye on you!