Warning: This article is dark and full of spoilers!  DO NOT read on if you are not caught up with Season 7 of Game of Thrones!

A lot of HUGE moments happened during Sunday night’s episode of Game of Thrones.  To get fully caught up on what went down, check out our episode recap for all the gritty details but, there was one scene which totally stole the entire episode.

Of course, we are talking about Olenna Tyrell (brilliantly portrayed by Diana Rigg) and her amazing scene towards the end of the episode.  Moments after Jamie (Nikolaj Coster-Waldau) and the Lannister army takes over House Tyrell’s castle, Highgarden, Olenna is confronted by Jamie himself.  Olenna knew what to expect.  She knew that her army was no match for the Lannisters and she knew that her time in this story was just about over.   But while she agreed to go out without a fight, her exit from the Game of Thrones universe would be anything but peaceful.

Jamie pours two glasses of wine and then proceeds to pour a vial of poison into one.  He hands the poison laced glass to Olenna and she chugs the wine down as if it were a shot of water.  Knowing the poison is now in her system and that she has absolutely nothing left to lose at this point, she hits Jamie with a secret that devastates him and that, no doubt, will get back to Cersei.

Olenna casually asks Jamie if the poison will hurt her and if she’ll turn purple and suffer.  When Jamie tells her no, she delivers the blow by saying:

“I’d hate to die like your son. Clawing at my neck, foam, and bile spilling from my mouth, eyes blood red, skin purple.  Must have been horrible for you, as a Kingsguard, as a father. It was horrible enough for me. A shocking scene. Not at all what I intended. You see, I’d never seen the poison work before. Tell Cersei. I want her to know it was me.” 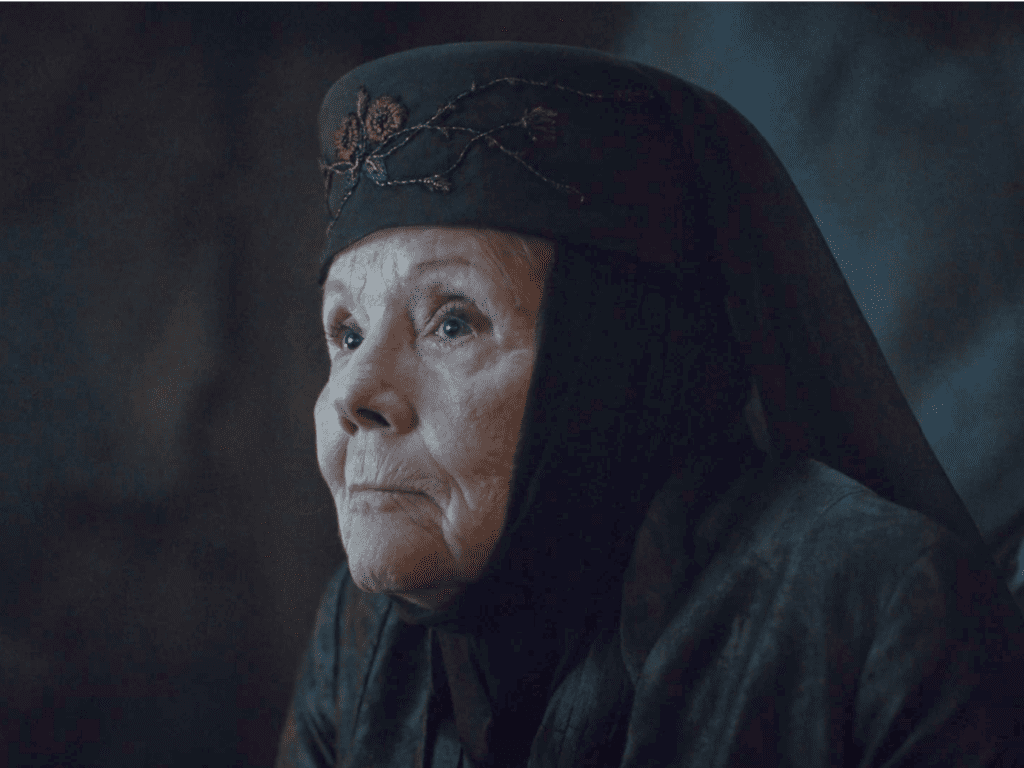 Now, while we, the audience, have known for quite some time that Olenna was responsible for Joffrey’s death, this comes as a major shock to Jamie and was a brilliant way for Olenna go out.  She may be the first character ever to actually win her own death scene!  Not only did Olenna ruthlessly deliver the ultimate FU to the Lannister but, her death could have major ramifications for the remainder of the series.

Not only did Olenna deliver the ultimate FU to the Lannisters but, her death could have major ramifications for the remainder of the series.  Olenna is yet another lost ally to Daenerys however, her death may also serve as a spark needed for Dany to align with Jon Snow.  Or, perhaps Dany will finally “be a dragon.”  Not to mention, Jamie will surely tell Cersei what Olenna said thus expunging Tyrion of any involvement with the death of her son.  Could this be the moment to finally disrupt the perfect brother/sister love affair and could this lead to the popular fan theory that Jamie will be responsible for Cersei’s ultimate prophesized demise? Her death could be a catalyst for some major game changing decisions and we can’t wait to see what happens next!

We have 4 episodes left to find out the answers to all these questions and how this all will play out!  What do you think?  What kind of impact do you see the death of Olenna Tyrell having on the Game of Thrones universe?  Tell us your thoughts in the comment section below!

A new episode of Game of Thrones will air on Sunday at 9 pm EST on HBO.