Just like the rest of the books we’ve checked out during Future State so far the Teen Titans’ future is bleak. Things aren’t looking good for anyone. The team is clearly going through some stuff and Titans island is destroyed. That big famous T shaped building isn’t even standing anymore! Truth be told a lot of these future state books are starting to blur together. I understand that the future sucks but does it really all have to be like this? I suppose Yara Flor’s book wasn’t too depressing –  but my point still stands. Future States: Teen Titans #1 is just such a mixed bag. 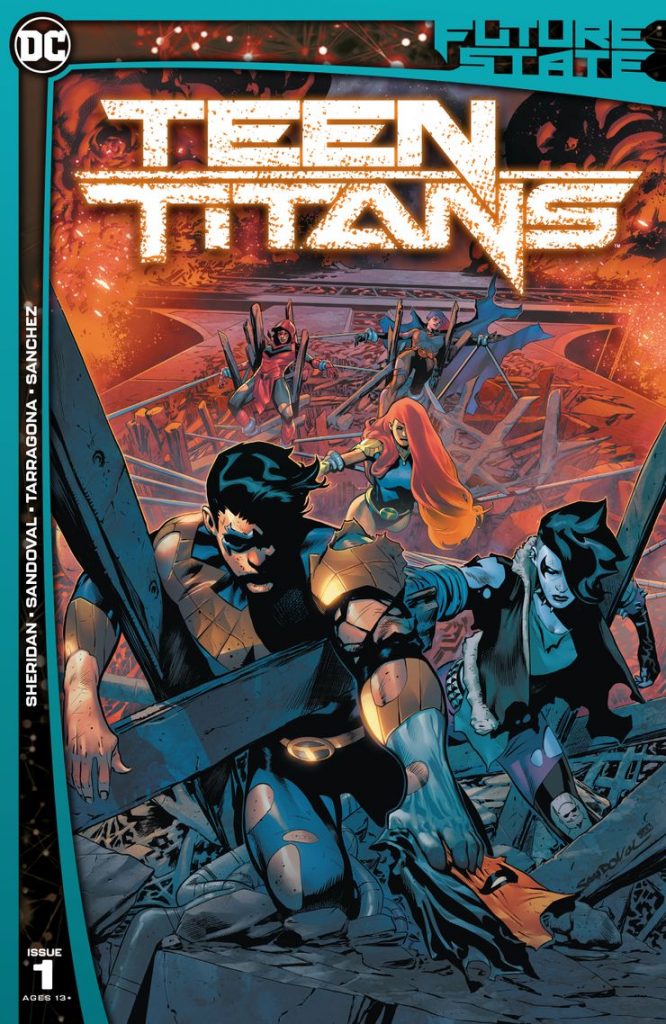 My biggest issue with this book is the inelegant jumps in time. I understand why they might be necessary for a story such as this. It makes the story really hard to follow though. I don’t know if that is by design, some kind of storytelling choice, but it’s very jarring. It also seems to jump to several different points in time at once. This might just be one of the books that you understand more once you’ve gotten your hands on the whole thing. I did appreciate how many Teen Titan’s characters appeared though! We even saw a few we haven’t seen in a good while – to my knowledge.

Then there’s also the introduction of Red X. We don’t know who’s under that mask but it does seem to tie into the story somehow. I’m unsure whether or not the Red X in the middle and the end was the same or if it was just Dick donning the costume once again but it’s something I hope they clarify. It seems like Deathstroke is going to be involved as well, or, I think Dick might have actually been the one putting the Deathstroke outfit on. Future State: Teen Titans #2 has a lot to answer.

So many things are introduced and never elaborated on it’s hard to recommend this one without reading the second issue. The spear of Destiny, Cyborg and Beast Boy fusing, Red X, whatever caused this whole scenario, Raven’s training. It’s a lot – too much, in fact. Even so, die-hard Titans, fans will probably enjoy seeing so many fan favorites in one issue. It’s also really cool to see Red X.