For those of you who have managed to get out to the movies and see Marvel’s latest, Guardians of the Galaxy 2, Funko Boss has a pretty cool treat that you’ll definitely enjoy. Spoiler Alert!

In the film, after surviving an explosion, both Star Lord and Yondu drifted down from above. Jokingly, Star Lord made a joke to Yondu stating ‘you look like Mary Poppins’. After asking if ‘he was cool’ and then getting confirmation from Star Lord that Mary Poppins was indeed ‘cool’, Yondu exclaimed ‘I’M MARY POPPINS YA’LL!’ in a perfect, delightfully humorous way that only Michael Rooker himself can do.

Thanks to this comedic line, of that, fans have started a petition to get Michael Rooker to make a cameo appearance in the upcoming Mary Poppins sequel; Mary Poppins Returns.

Also, fans have been asking Funko Boss if he would make a custom figure of ‘Yondu Poppins’…. and he did it!

Check out the image below: 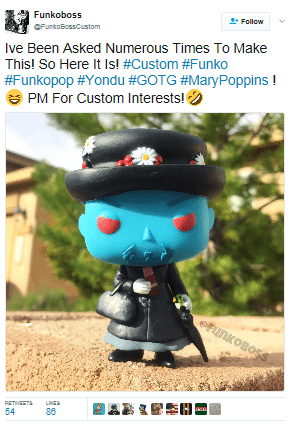 What do you think? Would you purchase this amazing pop?

Guardians of the Galaxy 2 is now in theaters.