Let It Go Frozen fans, there’s a new Elsa in town and her name is Caissie Levy. That’s right, Disney Theatrical’s new Broadway musical is finally upon us, and let’s be real– the cold never bothered us anyway.

The buzzworthy stage adaptation to our favorite feature film, which calls the historic St. James Theater in New York its home, came with high expectations from worldwide Frozen enthusiasts to live up to the hype… did it glide through the hearts of the audience effortlessly? Or barely penetrate the surface and shatter on the spot? The movie is the highest-grossing animated film of all time (no pressure or anything), but believe me, if you extend a hand to the show, hoping it’ll sweep you off your feet– well, it’ll rise to the occasion with every glistening ice shard it projects on stage. Who needs Spring when you can be stuck in Winter’s cold grip… forever.

We all know the story: Overcome with emotion she’s been bottling up for over a decade, Queen Elsa traps her kingdom in a perpetual winter. When her plucky sister Anna sets out on a journey to save the Kingdom from an eternity of ice, she joins forces with a headstrong iceman named Kristoff and his reindeer companion Sven, to bring back Summer to Arendelle… along their way, they come across a humble shopkeeper, comedic snowman, mythical trolls (or in this case, “hidden folk”), and a frigid winter that Elsa’s unstable magic has unleashed.

Now, let me get this out of the way: you’d think the theater would be packed with screaming toddlers, and giddy children, it’s Frozen after all, right? Wrong. Surprisingly, if you have the chance to visit the show, you’d be interested to find a whole lot of adult butts in each seat. Yes, there were kids in the audience as well, as I sat just four seats away from a young girl dressed as Anna with her Olaf plush in hand that her parents purchased for her at the massive merch stand in the lobby of the theater. Sure, Broadway’s production of Frozen has glimpses of its Oscar-winning counterpart, but don’t get it twisted– it’s not necessarily soley geared towards the tiny humans. Quite frankly, with the added risqué dialogue here and there and a seemingly naked dance scene in a newly added song called “Hygge” (pronounced HUE-gah), I can’t help but wonder if this show was perhaps hand-crafted for an older audience while attempting to maintain that iconic Disney brand. The stage adapted trolls, if you can even call them that now, have abs. Yeah, that’s something new and improved.

Act I is delightful. You get several of the 12 new songs written for the production by Kristen Anderson-Lopez (Up Here, Winnie the Pooh, In Transit) and Robert Lopez (Avenue Q, The Book of Mormon, Up Here) sprinkled in, along with some notable fan favorites that really flesh out secondary characters including Hans (John Riddle), the conniving prince who has his eyes set on Anna (Patti Murin) and the throne, and Kristoff (Jelani Alladin)– who can I say was phenomenal. You really glide through the musical with ease, and things feel recognizable. Luckily, you quickly find yourself at the end of the first Act mouthing the words to Caissie Levy’s show-stopping number “Let It Go,” which, will blow your freakin’ mind. I love Idina Menzel as much as the next theatre nerd… but, it would be an injustice if I didn’t make this very bold statement: Ms. Levy sang the h-e-double hockey sticks out of this song. As far as I’m concerned… it’s the best rendition of it to date.

Act II had its kinks, but was entertaining nevertheless. I’m most likely in the minority of people who thoroughly enjoyed the song “Hygge,” which opens up the second half. I even purchased a Wandering Oakens sweater, so I guess you could say I’m a HUE-gah fan. But despite the minor hiccups, I ultimately sympathized with the fact that they must have faced many challenges in order to recreate the magic that was so effortlessly presented to us in the film version. There’s no doubt about it though, the sets were amazing… many jaw-dropping effects were added in order to enhance the icy landscape presented to us. I nearly jumped out of my seat in the front row when Elsa unleashed her magic in the ballroom after her coronation.

The addition of the song “Monster” was welcomed. It was strong, catchy, and heartfelt, all without conflicting with the epic-ness that is “Let It Go.” Levy’s sequined pants was also a highlight for me… although, there was not much conversation as to why or when the change from her gorgeous dress occurred? Either way, Elsa is the first Disney Princess to wear pants on stage and that’s pretty powerful in its own right, so I’ll take it. Explanation not needed.

Due to set restrictions, I imagine, we didn’t get to see much of Anna’s journey in the mountains with Kristoff. Which was unfortunate, as Patti Murin embodied Anna so well, and that was one of my favorite parts in the movie. Seeing that journey unfold before our very eyes, well, that’s what fostered the deep connection between the two characters in the film. We did see them trek through the mountains, and face a fall that almost lead to their sudden death– but it was just not the same. I would have liked to see Anna a bit more in that non-conventional Disney princess role, with her neurotic tendencies going haywire, and more importantly fighting the snow monster. Sadly, Marshmallow wasn’t in the cards this time around– but Anna and Kristoff’s number “What Do You Know About Love?” was totally adorbs.

A Few (minor) Qualms I Had:

TROLLS. Or lack of. Now, this seems like an odd thing to request, a twenty-something demanding that a quirky detail from the animated feature be reborn on stage. As an audience member the newly imagined hidden folk were more primal, and dare I say out of place? I couldn’t help but feel slightly confused when they were on the stage knowing that this was Frozen I was watching, and not something set in post-apocalyptic times… plus their glowing eyes probably didn’t help their case. I believe during their pre-Broadway tryout in Denver, Pabbie (Timothy Hughes) had a troll like headpiece on. I would have liked to see that make it to Broadway– if only to add some familiarity and a smidge more charm to those characters. But I’m sure the production had their reasons for doing away with this creative piece. Maybe it was heavy, hot, or not cost effective. If you’re into hunky folk singing in Norwegian… then, this version is for you.

OLAF’S CLOUD. Or lack of. How is Olaf surviving Summer, when, spoiler alert, Anna breaks the spell and commits an act of true love for her frigid sister? Does he become a puddle after Act II’s conclusion? I recognize that their resources are limited, wisping away cloaks and gloves is one thing, but this isn’t an animation where you can wave a magic wand and make anything happen on screen. I get it, it was just a bit disappointing not to see his cloud of flurries keeping him going at the end.

What They Got Right:

CAISSIE LEVY. I could probably base this entire review off the fact that Disney picked the right Elsa. Hey, we’re glad Idina Menzel had other things to do… because, Levy, well she brought the house down. The Canadian actress and singer who has starred in musicals such as “Wicked,” “Hairspray,” “Ghost” and “Hair,” is perfection. No, really. I’m not dramatizing the fact that she is the picture-perfect Elsa, and although we didn’t see her as much as I would have liked to in the show, she was the one person I kept looking forward to seeing on stage. Because she’s just that good. I plan on visiting the magical land of Arendelle again, just for Levy. So mad props to her.

PATTI MURIN. If you could bottle up Anna’s essence, it would directly translate to Ms. Murin’s rendition of the iconic Disney character. She played carefree, bubbly, and of course awkward so well. The lack of ladylike tendencies made her a dream to get to know in this stage version, and even though Ms. Murin is well-known for her role on NBC’s hit drama series Chicago Med, her broadway presence speaks volumes. Plus, she has a killer voice to boot.

WANDERING OAKENS. Anna and Kristoff stumbling upon a gem of a shop in the mountains in their time of need was probably the best addition to the musical. Though Kevin Del Aguila (who plays Oaken) sang the song which brought the raunch (in the dancing… not the words), he was refreshing to watch as he walked through the audience and up a set of steps to the stage opening the second act to introduce us to a new mood.

KRISTOFF, AND SVEN. Jalani Alladin is a scene stealer, and get this: it’s his broadway debut! Not too shabby for your first run on Broadway, eh? His range was on point, he had a loveliness to Kristoff that is hard to describe. But you’ll know it when you see it. Not to mention, his companion Sven, who is a lifesize reindeer you can see throughout the show was visually stunning and super unique. Mad props to the man inside Sven…. Andrew Pirozzi, who must have impeccable calves and the stamina of a steed to walk the way he walks on stage. I hope production has a masseuse on standby, because this poor man has got to have back problems from playing this role day after day.

YOUNG ANNA. Audrey Bennett, the firecracker behind Young Anna, was a pleasant surprise. At such a tender age, I underestimated her stage presence and was giddy to see her deliver her lines with poise, punch, and pizzazz. You couldn’t help but smile when she was coaxing her on-stage sister counterpart to perform magic or giving Olaf a bouncy butt.

Overall, Love wins in this epic tale that follows Levy, Murin, and the entire cast. Frozen on Broadway is a must-see for lovers of Disney, and those who are just curious. The ensemble is incredible, Elsa’s dress is stunning, and everything you’d hope for, and it has enough of that iconic Disney vibe that many are accustomed to, with some interesting tweaks that make it feel fresh, new and a little bit naughty.

Get TICKETS to “Frozen” here 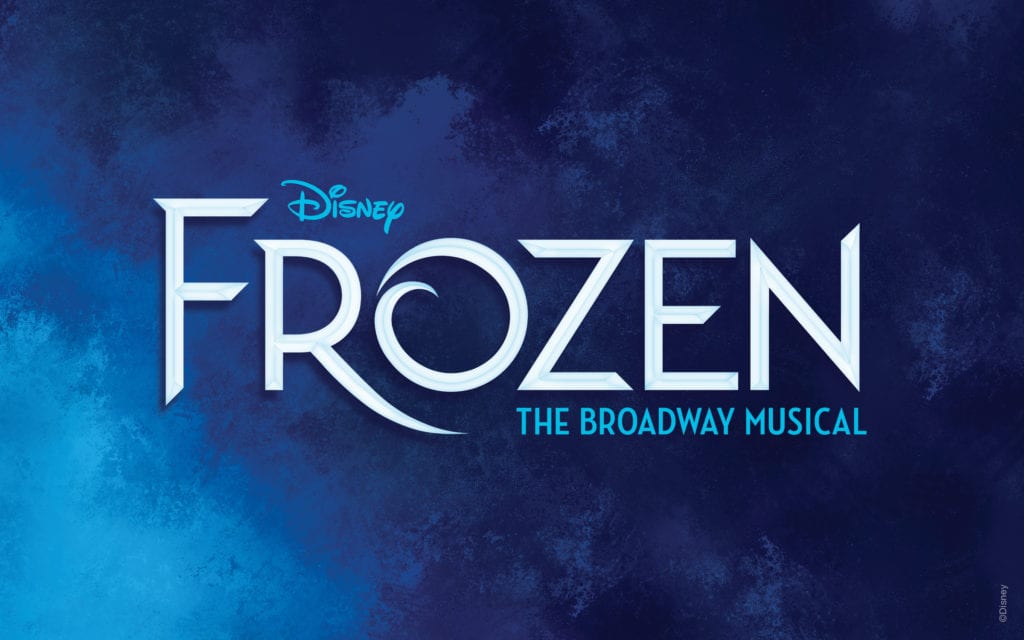